The ultra-Orthodox city of Bnei Brak has managed to lower the number of infections, largely because local rabbis convinced their congregations to observe the state-ordered restrictions. 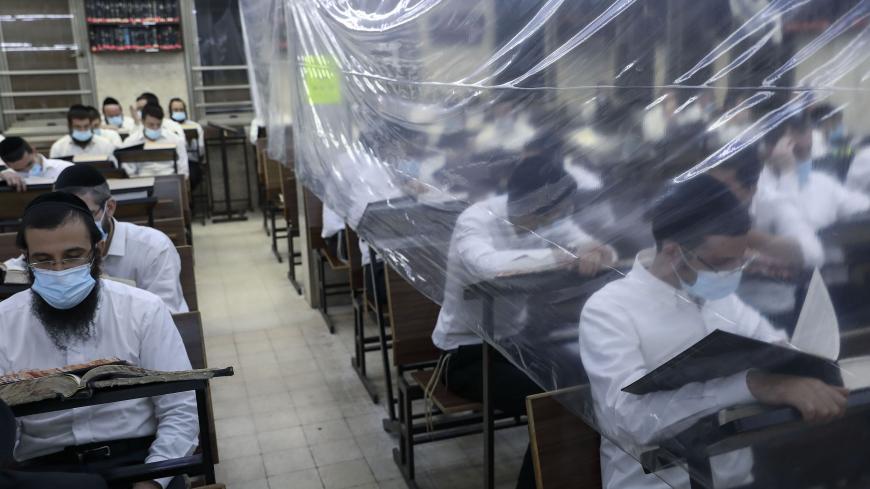 Ultra-Orthodox Jewish men study in a hall divided with plastic sheets as protection from COVID-19, at their Kollel, a gathering place for full-time advanced Jewish law studies, in the city of Bnei Brak near Tel Aviv in central Israel, on Oct. 25, 2020. - YAAKOV NAHUMI/AFP via Getty Images

“It’s a real rollercoaster and now we’re at a good spot," said Bnei Brak Mayor Avraham Rubinstein, "with a city with 'green' coronavirus statistics, when only two or three weeks ago we were at an especially frightening low point.” Despite his optimism, another wave of infection could hit the city again, as happened at the beginning of pandemic and in the second wave in September-October.

Most of Bnei Brak’s residents are ultra-Orthodox Jews. It’s a crowded and poor city, ranked in the second lowest socioeconomic sector in Israel. The average income of a salaried worker in the city is about half of the national average. The high birthrate in the ultra-Orthodox community leads to crowded homes, much more so than in the rest of Israeli society.

These factors make it a coronavirus incubator. In this, community Torah study and prayer are the highest values, values that can clash with the restrictions authorities seek to impose to contain the virus. Rabbi Chaim Kanievsky instructed the Litvak community (one of three sectors of ultra-Orthodox society) not to shut down schools, saying, “Sacred religious studies in schools, yeshivas and kollels [yeshivas for married men], and all other forms of Torah study will continue as usual, since the very existence of the world depends on them. Great care must be taken to be meticulous in following all instructions regarding hygiene, since this is in keeping with the biblical injunction of ‘Watch over yourselves very carefully’ (Deuteronomy 4:15)."

Most schools and yeshivas listened to his instructions and infection rates rose dramatically, making Bnei Brak one of the hardest-hit locations in Israel. It took enforcement of a lockdown, aggressive public health education, help from the army and cooperation from other rabbis, who advised residents to listen to public health directives, to bring down the numbers.

But at the end of the summer, the story repeated itself. Restrictions had eased by then but the return to school throughout the country hit Bnei Brak especially hard. In September it became a "red city" again, with infection rates that necessitated serious restrictions.

The ultra-Orthodox public was only partially compliant. Most people wore masks out and about, but despite a holiday closer in the rest of the country, studies continued at some institutions, leading to a new rise in infections. There were also incomplete restrictions during the pre-High Holiday prayers. Deaths from the virus began to climb and many people, mostly older but some younger as well, died in September and October. At the end of October the city counted 135 victims, most of them in the last two months.

Back to Kanievsky. This time, he also declared that studies should not be interrupted for testing and that elementary schools and high school yeshivas should not be closed. Ironically, the rabbi himself became sick with the virus about a month ago, and because of his advanced age, 92, there was real concern for his life. After a few days of high fever, he recovered.

Following the extended lockdown imposed before the Sukkot holiday in mid-September, Bnei Brak began to show signs of emerging from the worst of the pandemic along with the rest of the country.

By Oct. 27, new cases had dropped to 35 and the rate of infection reached only 3%, the threshold for “green” status. The mayor ascribed this progress to increased enforcement of restrictions and to the cooperation of rabbis who instructed their congregations to follow the guidelines. Even Kanievsky, together with Rabbi Gershon Edelstein, advised that prayers be held outdoors and holidays be observed without gatherings. Shas Party rabbis took the lead and sharply declared that restrictions must be followed and that those who violate them could be declared murderers under Jewish law.

Their declaration stated, “Our rabbis, the members of the council, highlight and emphasize the clear requirement to follow all of the rules, and warn that according to Torah law, whoever does not do so becomes a potential murderer. Each one of us should gather their strength and do all in their power to keep each of the health guidelines, without anyone claiming personal exceptions, so as not to cause damage or be damaged, and thus become, heaven forbid, a potential murderer.”

Gen. Roni Numa, who is charge of the coronavirus response in the ultra-Orthodox sector, explained to Al-Monitor that these guidelines could not have been effective without the cooperation of the rabbis. He said that the challenge was to find ways to allow studies to continue safely, since they are central to ultra-Orthodox life. Thus high school-age yeshiva students who attend boarding schools — which is most students at this age — were divided into smaller groups and ordered to maintain safety regulations and most importantly, not to go home for at least a month.

The Home Front Command also helped distribute food, organize prayers in the streets and implement comprehensive testing in the community. In all, 70% of the population of Bnei Brak was tested in September and October.

With high rates of people who have recovered from the virus in the city, about a tenth of the population at 25,000, the municipality recruited survivors to help the elderly and isolated patients. Arik Adler, head of the city’s operations center, said in an interview with The Marker that the goal was for every recovered volunteer to take responsibility for two or three elderly residents and visit them, to relieve their loneliness and address their needs. “The goal here is to heal the soul, mostly, because people are going crazy from loneliness, and to help them in a way that would reduce their need to leave their homes.”

Still, many fear that even with the ultra-Orthodox making more of an effort, a new wave would restart once the lockdown is lifted.