When the ultra-Orthodox residents of Bnei Brak realized that the army was there to help them against the coronavirus, their negative attitudes changed almost overnight. 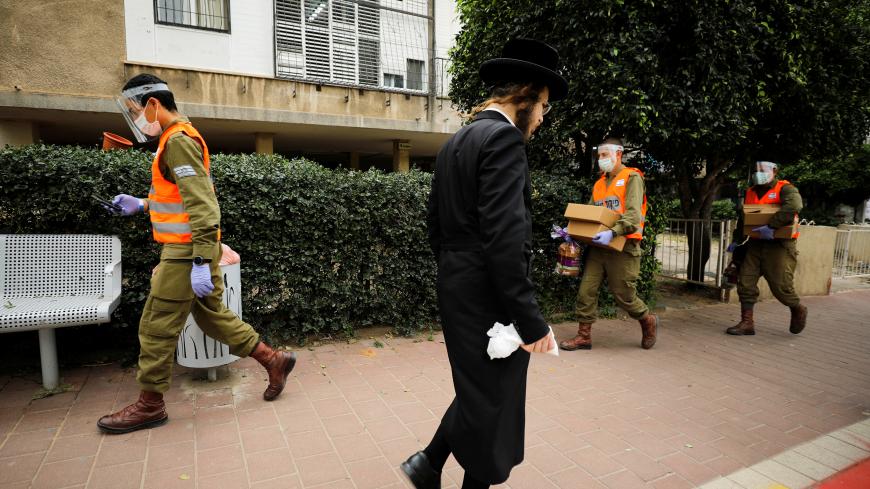 Israeli soldiers deliver food to residents in an ultra-Orthodox Jewish town, Bnei Brak, badly affected by the coronavirus and which Israel declared a "restricted zone" due to its high rate of infections, April 5, 2020. - REUTERS/Amir Cohen

It is April 8, Wednesday morning, just hours before the Passover holiday begins. Under normal circumstances, thousands of people in the ultra-Orthodox town of Bnei Brak and the ultra-Orthodox neighborhoods of Jerusalem would gather in local parks and nearby fields to burn whatever leavened products they have left. It is in keeping with ancient Jewish law, which prohibits the eating of any grain-based products in which the dough has had a chance to rise for the entire week of Passover. On this Passover eve, however, military vehicles patrol the city and ultra-Orthodox neighborhoods instead. They are there to collect the hametz (“leavened products”) left by the residents at the entrances to their building. All around them, local residents applaud and heap praises on the troops. These soldiers will be taking the leavened products to be burned, under the guidance of an Israel Defense Forces (IDF) rabbi. In the years before the coronavirus pandemic, no one would have imagined scenes like this even in their wildest dreams.

“There is no way that Israel’s ultra-Orthodox community can go back to what it was before the coronavirus pandemic.” I’ve been hearing this bold assertion from ultra-Orthodox Jews of every type and stripe for the last few days. These include the most conservative groups, who prefer to isolate themselves from Israeli society, but also groups and individuals more involved in Israeli life. The most significant change revolves around their attitudes toward government institutions, with an emphasis on the IDF and its troops. This can be traced to the enormous sense of crisis, given the high percentage of ultra-Orthodox Jews infected with the virus compared with other sectors of Israeli society. The pandemic has challenged old attitudes and beliefs of this self-isolating society.

Many of its rabbis are to blame for this, too. At the beginning of the crisis, they instructed their followers to ignore Health Ministry guidelines and continue to worship in large groups. The best known of these rulings came from Rabbi Chaim Kanievsky, generally regarded as the greatest religious authority in the ultra-Orthodox world. He ruled that nothing should interfere with Torah study, even though this contradicted the explicit directives of the Ministry of Health, which ordered that all study in groups should be stopped, regardless of the forum.

Under normal circumstances, internal criticism of the rabbinic leadership is hardly ever heard in ultra-Orthodox society. This time was different. Not only was it heard but it was leaked, mainly by ultra-Orthodox journalists. So, for example, journalist Yisrael Frey had sharp words to say about Kanievsky and his family about that controversial ruling, but also about the fact that they are selling “indulgences.” For the price of a financial contribution to the rabbi’s yeshiva, people were promised health and healing, and granted an assurance of protection from infection. It wasn’t too long ago that such scathing attacks would have provoked an angry response from the ultra-Orthodox community. Today, the responses are largely supportive.

Bnei Brak is the city most impacted by the virus, with about 1,800 cases to date (April 12 in the morning). What makes the situation in this city even more troubling is the problem of overcrowding. Ultra-Orthodox families are known for their many children, squeezed into relatively tiny apartments. The problem deteriorated so rapidly there that it was finally decided that the IDF’s Homefront Command would take responsibility for the city. It was put under closure, and Maj. Gen. Roni Numa (res.) was appointed to prevent the spread of the virus alongside the city’s mayor.

Troops, many of them from combat units, are now helping give tests to local residents who show symptoms of the disease. When residents are diagnosed positive, those same troops will then transport those infected to a hospital. But more than anything, soldiers are delivering food, medicine and medical equipment to the residents. Some 125,000 parcels of food were distributed over the last few days alone. These soldiers were even armed with a Yiddish-Hebrew pocket phrasebook, since Yiddish is the first language for so many of the city’s residents.

At first, these interactions between soldiers and the ultra-Orthodox community raised many concerns. After all, military service is the core issue in the conflict between ultra-Orthodox society and Israel at large. Just over a year ago, the Enlistment Law advocated by the Ministry of Defense became grounds for an election. While Ultra-Orthodox society is not antagonistic toward the IDF per se, many subgroups regarded the very presence of a single soldier in ultra-Orthodox neighborhoods as a clear and present danger, much like a scantily dressed young woman.

Once the residents realized that the army was there to help, attitudes changed almost overnight. Eitan S., a soldier in an elite unit now stationed in Bnei Brak, told Al-Monitor (asking that his full name not be divulged) that he was assigned the task of delivering food and medications to elderly residents, who could not leave their homes. “When I went to the first house, a little boy opened the door and immediately ran off, screaming. Then his mother came. When she saw the food that I had brought them and realized that it was for her family to celebrate the holiday, she mumbled a thank you and tears welled up in her eyes. In another apartment, the entire family, almost 10 people, stood by the door to serenade me with a prayer of gratitude. In yet another family, a boy of about 10 years old approached me, even though it is forbidden. He touched my unit’s insignia and my beret, and asked me what they meant.”

Scenes of public gratitude such as this to soldiers helping out in Bnei Brak have been filmed and gone viral on social networks. The exchange of kind gestures is mutual, too. All throughout the day, residents bring soft drinks, baked goods, and sweets to soldiers and police stationed in the streets as a token of their gratitude.

In an interview with Army Radio, the chief of staff, Lt. Gen. Aviv Kochavi, said that the very presence of troops in ultra-Orthodox towns and neighborhood is tearing down walls and bringing people closer together. The people see soldiers acting on their behalf and know how to express their gratitude. And they realize that the IDF is truly the army of the people — all the people.

“Will this involve their also serving in the security forces?” I asked.

“Yes, absolutely, including civil service, including service in the police, the fire department, and the IDF. There is no doubt about it.” On Monday, Weitzman approached the office of Tel Aviv Mayor Ron Huldai, asking that City Hall be lit up that night with words of support for Bnei Brak and its residents. That night, Huldai lit up City Hall with the words “We Love Bnei Brak.’’ Weitzman said he received hundreds of responses from the people of Bnei Brak thanking him for his initiative. Many were amazed that secular Tel Aviv, “Sin City,” as they would normally see it, would come to identify with Bnei Brak, its ultra-conservative, self-isolating neighbor. After all, the two cities are usually thought of as diametric opposites.

Is Weitzman’s optimism realistic? Perhaps. Much depends on what happens with the pandemic and the opposition of ultra-Orthodox politicians. At first, some of the most prominent political figures even opposed the decision to send troops to Bnei Brak.

One thing that could expedite this process of integration is the anticipated economic crisis, which is likely to hit the ultra-Orthodox community especially hard. This means that large numbers of the ultra-Orthodox will be forced to go to work, while others will consider civilian or military service. The genie is out of the bottle, and it doesn’t seem so terrible after all. It may even help deal with real problems faced by the community. At the very least, some formidable obstacles have been removed.