Ultra-Orthodox riot across Israel over lockdown

Resistance to pandemic restrictions has grown violent in ultra-Orthodox towns, where a bus driver was attacked during anti-government riots. 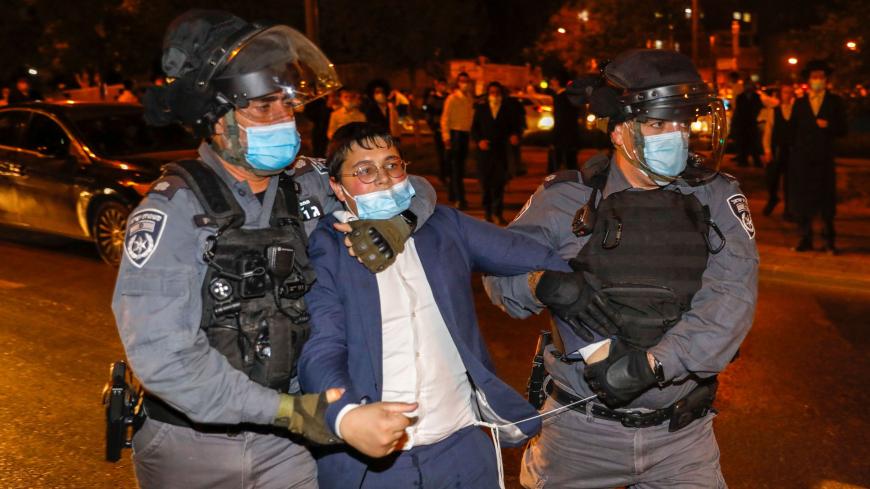 Israeli security forces arrest an ultra-Orthodox Jewish man during a protest against the enforcement of emergency regulations against the pandemic, in the ultra-Orthodox neighborhood of Mea Shearim, in Jerusalem, Oct. 5, 2020. - AHMAD GHARABLI/AFP via Getty Images

A mob of ultra-Orthodox men attacked two buses in the central city of Bnei Brak last night. One of the drivers was beaten and chased from his vehicle before the rioters set the bus on fire. By the time firefighters arrived, the bus was destroyed. The flames reached nearby electric cables, causing a partial blackout in the city. Apartments in the vicinity were damaged by the flames and smoke. Police used stun grenades to clear the rioters, who also chased some journalists at the scene.

Four people were reportedly arrested during the night on suspicion of damaging property and attempting to harm emergency workers. Rioters toppled a traffic light and set fire to trash bins. They continued to block roads in the city into the early morning. A police statement said that during the clashes, one of the officers felt threatened as he was surrounded by rioters and fired a warning shot into the air.

The violent clashes started yesterday morning, when police tried to prevent students from entering the Gronda yeshiva in Ashdod. The school for the radical ultra-Orthodox Jerusalem faction had apparently violated lockdown and health restrictions on several occasions.

Later in the day, riots also broke out in the ultra-Orthodox Mea Shearim neighborhood in Jerusalem when police tried to shut down a school that was operating in violation of the lockdown restrictions. Rioters clashed with the police, hurling objects at officers.

Before the lockdown went into effect, Prime Minister Benjamin Netanyahu had contacted associates of leading ultra-Orthodox Rabbi Chaim Kanienvsky about the closure of schools. Kanievsky reportedly ordered ultra-Orthodox schools to close for several days, but later reports revealed that the rabbi had authorized some of them to remain open.

On Saturday night, the leader of the Vizhnitz Hassidic court, Rabbi Israel Hager, announced the community’s schools would reopen on Sunday in defiance of the lockdown. He was quoted as saying, "The government is ignoring the importance of Torah studies for us."

Israel has accelerated its vaccination drive and is set to start vaccinating high school students aged 16 to 18. Still, the number of people infected in Israel continues to grow. Over the past few days, health authorities had detected several cases of British, South African and what is suspected to be California coronavirus mutations. Yesterday, the government decided to seal Israel off, ordering the closure of the country’s main airport Ben Gurion starting Tuesday Jan. 26 through the end of the nationwide lockdown on Jan. 31.