Ultra-Orthodox educational institutions continued to operate despite orders by the government to close all schools to try to control the spread of the novel coronavirus. 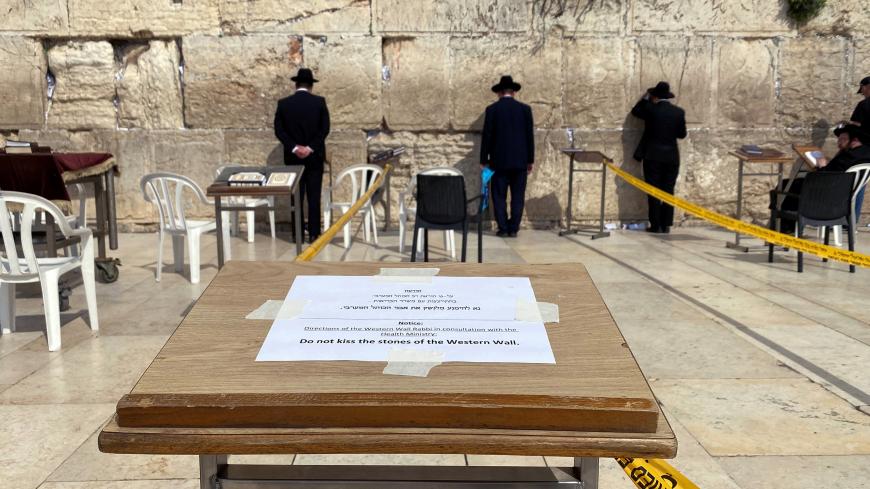 Ultra-Orthodox Jewish men pray in front of the Western Wall behind a notice advising visitors not to kiss it, Jerusalem, March 16, 2020. - REUTERS/ Ilan Rosenberg

The term “civil uprising,” or “insurrection,” has been used to describe a ruling by Rabbi Chaim Kanievsky, one of the top spiritual leaders of the ultra-Orthodox world. Despite an unequivocal directive from the Ministry of Health to close all educational institutions, Kanievsky ordered his followers on March 14 to continue studying in their yeshivas as usual. An ultra-Orthodox public figure who focuses on the relationship between the ultra-Orthodox and the state told Al-Monitor, “I was horrified when I heard this ruling. No one in our community would ever speak out against the rabbi, because what he says is final, but it goes against the religious injunction of ‘Follow the laws of state.’ In other words, it is a call for a civil uprising.”

The man, who spoke on the condition of anonymity, further explained, “Instructions by the rabbis, whom we follow, touch on all aspects of day-to-day life. They rule on what is kosher, on prayer, on marital status, etc. Every so often, there are gray areas in which there might be conflicts with the law or instructions from the authorities, such as whether or not to serve in the military. These are then subjected to a lengthy debate and handled in dealings with the government. In this particular case, the problem is much more serious, because the Ministry of Health’s directives are unequivocal and affect the entire population. It was as if the rabbi said, ‘No one under my authority will follow these instructions. When it comes to following the laws of the state, we have extra-territorial status.’”

Instructions from the Ministry of Health in response to the spread of the novel coronavirus are released at frequent press conferences in which Prime Minister Benjamin Netanyahu, Health Minister Yaakov Litzman, who is ultra-Orthodox, and other ministers take part. This was how the public was informed on March 12 that all schools would be closed, gatherings of more than 10 people would be banned and various other measures introduced to reduce economic activity.

Regardless, on the night of March 14, Rabbi Kanievsky released his own instructions to the public: “Sacred religious studies in schools, yeshivas, and kollels [yeshivas for married men], and all other forms of Torah study will continue as usual, since the very existence of the world depends on them. Great care must be taken to be meticulous in following all instructions regarding hygiene, since this is in keeping with the biblical injunction of ‘Watch over yourselves very carefully’ (Deuteronomy 4:15).” As for girls, his instructions were to follow the directives of the Ministry of Health.

Kanievsky is the most senior spiritual leader of the Lithuanian faction of the ultra-Orthodox community. His ruling was backed by Rabbi Gershon Edelstein, dean of Ponevezh, the flagship yeshiva of the Lithuanian faction, and the ultimate arbiter on all matters pertaining to yeshivas in general. They published the ruling on yeshivas while Litzman was engaged in efforts to exempt at least some ultra-Orthodox institutions from the state-ordered comprehensive measures, effectively allowing them to function as usual. Netanyahu and his national security advisor, Meir Ben Shabbat, refused to compromise on the issue.

On March 15, the schools and yeshivas aligned with the Lithuanian faction opened as if it were business as usual. In certain municipalities, including Petah Tikva and Jerusalem, police and inspectors moved to shut them down. In most instances, the heads of the yeshivas responded positively to their demands.

Other rabbis do not share the position advocated by the Lithuanian leaders. Israel's two chief rabbis, Yitzhak Yosef and David Lau, even issued instructions of their own, calling on the public to follow the Ministry of Health's directives to the letter. “At this time, any health-related directive has the same status as Jewish law,” they announced. Ultra-Orthodox rabbis from other factions, including Mizrahi rabbis affiliated with Shas and rabbis associated with the various Hassidic factions, seconded this position.

Having been updated on the situation, Netanyahu requested a meeting with a group of rabbis representing the various ultra-Orthodox factions and with the chief rabbis. The meeting convened the night of March 15, and a few hours after it, Kanievsky and Edelstein agreed to amend their instructions. Their new directives, however, still failed to follow the same rules as those put in place by the government. Their new instructions said that studies would continue almost as normal, but in smaller groups of just 10 learners or students per classroom. This too went against the advice of the professionals at the Ministry of Health, who opposed the idea for medical reasons, i.e., fear of infections, and also because of how the broader public might react if some were allowed to flaunt health instructions.

Al-Monitor has learned that a senior official in the Ministry of Health told an internal forum that due to the nature of ultra-Orthodox society — with large families living in densely populated neighborhoods — if, God forbid, there were an outbreak of the virus because of the yeshivas, there would not be a single ultra-Orthodox home without an infected member. If that were to occur, the spread of the virus would be expedited across all sectors of Israeli society. The ultra-Orthodox town of Kiryat Yearim illustrates this dynamic well, with 15 people originally found to have been infected but now with more than a quarter of all residents quarantined. The government is considering placing the entire town under closure.

This brings us back to Rabbi Kanievsky’s instructions. An ultra-Orthodox public figure told Al-Monitor, “It's as if there aren’t enough suspicions and accusations about us, that we don’t carry our share of the burden, or that we don’t fulfill our obligations like everyone else, and that we ignore the state and its needs.… The rabbi’s instructions provide vast amounts of ammunition to anyone who hates the ultra-Orthodox.”

Conversations with senior officials at the Ministry of Health and in the Prime Minister’s Office, the two entities responsible for handling the coronavirus pandemic, suggested the degree of shock over the rabbi’s behavior. A senior security official told Al-Monitor on the condition of anonymity, “Imagine if some member of the Knesset or the head of a local authority, or some preacher in a mosque for that matter, would instruct his followers to ignore our instructions. He would immediately be hauled in for interrogation on charges of inciting rebellion and insurrection. The instructions of the Ministry of Health must be followed. Violating them is subject to punishment, and it goes without saying that the same is true of any public figure who calls on his followers to violate them.”

In response, the ultra-Orthodox explain that the rabbi’s remarks were based, among other things, on the deep belief that study of the Torah is a commandment of the first order, equivalent to military service in the Israel Defense Forces because of the role it plays in defending the people of Israel. “If the IDF continues to function, we must too,” Edelstein was quoted as saying.

This story underscores the conflict within the ultra-Orthodox sector between obeying its rabbis and following the law of the land. It also highlights the lax nature of the status quo surrounding this issue. The ultra-Orthodox have come a long way over the last few years in drawing closer to and connecting with the Israeli public at large. The decision by the community's rabbinic leadership to ignore government directives intended to save lives is a big step backward and a devastating blow to any trust that the broader population may have had toward them.