By presenting a level-headed image of a politician with a real anti-coronavirus program, Yamina leader Naftali Bennett is gaining the support of many who are disappointed in Prime Minister Benjamin Netanyahu. 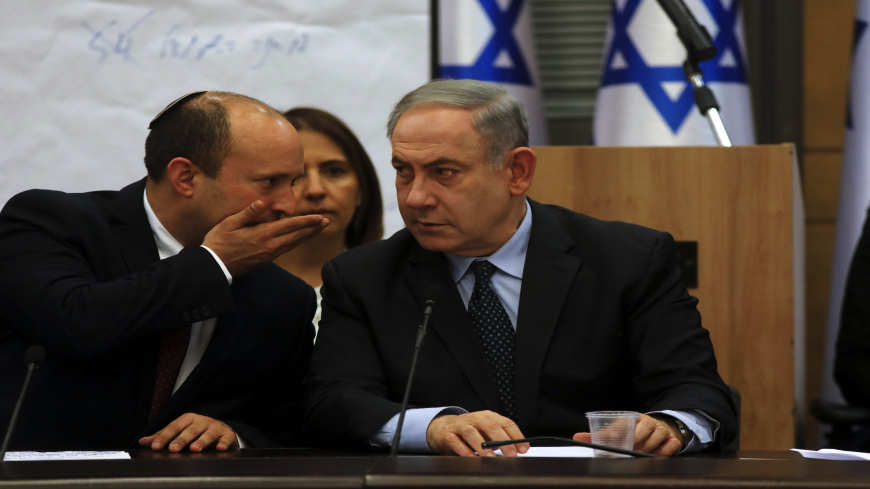 Israel's Defense Minister Naftali Bennett whispers to Prime Minister Benjamin Netanyahu during a meeting of the Israeli right-wing block, at the Knesset (parliament) in Jerusalem, on March 4, 2020. - MENAHEM KAHANA/AFP via Getty Images

He appeared dressed in scrubs like any member of the medical team, complete with regulation personal protective equipment, only he was surrounded by the hospital’s director and a team of physicians. It was Oct. 7, and Yamina party chairman Naftali Bennett was paying a visit to the coronavirus intensive care unit ward at Rambam Hospital in Haifa. He could easily have been mistaken for a run-of-the-mill member of the team in the middle of an exhausting day. That’s exactly the image he wanted the media to capture.

Later that day, Bennett tweeted: “And a word about ‘togetherness.’ I met doctors and nurses, men and women, Arabs and Jews, religious and secular, all of them pouring heart and soul into one noble purpose — saving human lives. … Let’s put our differences aside and beat the coronavirus together. Together we will win!”

Just one day earlier, Bennett visited the southern tourist town of Eilat, which was closed to vacationers because of the second quarantine and now faces an employment level measured in tens of percentage points. Flipping back through Bennett’s calendar shows that just about every day over the last few months, he went out to the field to visit business owners who were impacted by the virus and to hear the anguished outcry of the unemployed. Every single one of these visits received the requisite documentation on the various social networks. All the while he offered an alternative plan to dealing with the coronavirus than what the current government is offering. He even put out a book (two months ago) in record speed titled “How to beat an epidemic.’’

This flurry of activity has proved successful. Dramatic polling results, already released by Channel 12 on Oct. 6, showed Bennett breathing down the neck of Prime Minister Benjamin Netanyahu (23 seats for Yamina compared with 26 for Likud if elections were held today). It’s a remarkable achievement, especially considering that as late as April 2019, Bennett was considered political deadwood. His party failed to pass the electoral threshold, and it was not at all clear that he could rehabilitate himself.

Bennett managed to get himself into the Knesset in the second round of elections in September 2019 and was even appointed minister of defense. At the time, Netanyahu was worried that without giving Bennett that lofty portfolio, he would end up throwing his support behind Blue and White party chairman Benny Gantz.

Then, last May, Netanyahu left Bennett and his six seats out of the unity government, hoping that this would finish him off for good. This left Bennett in an opposition made up mostly of center-left parties and the Arab Joint List. As it turned out, it was the best thing Netanyahu could do for him. Within just two months, the head of the right-wing settler party surpassed them all in terms of popularity. With Netanyahu plummeting in the polls and the official chairman of the opposition Yair Lapid unable to take off, Bennett has emerged as the big winner in the coronavirus crisis.

That is hardly the end of the Bennett phenomenon. He has managed to challenge Netanyahu from the right and present himself as a candidate for the office of prime minister. Actually, support for Bennett increased the moment he cut off his dependence on Netanyahu and positioned himself as an alternative. He is almost the only beneficiary in what is seen as a government fiasco of historic proportions.

Over the last few weeks, Bennett has also intensified his attacks on Netanyahu, using every interview he can to accuse the prime minister of putting his personal issues first before actually dealing with the crisis, while noting that this kind of behavior is disgraceful. This line of attack has proven itself too, and Bennett continues to gain popularity. Like a magnet, he is even drawing seats in polls from centrist Blue and White voters. Disappointed with their own party, they see Bennett as a viable alternative.

What makes this especially fascinating is the idea that Bennett is an unapologetic right-winger who wears a yarmulke and whose major blocs of supporters are the settler community and the far right — the very people who support annexation of West Bank settlements, weakening the legal system and diminishing the power of the Supreme Court. Measured in terms of each of these parameters, Bennett is far more extreme than Netanyahu and the Likud.

How did Bennett do all this? How was he able to make himself the unofficial head of a shadow government? Will he be able to maintain this new standing? Will he succeed where others before him — including several chiefs of staff turned into politicians — have failed and bring about Netanyahu’s downfall?

Bennett is a disciple of Netanyahu. He worked alongside him as his chief of staff at the lowest point of his (Netanyahu’s) political career, when Netanyahu headed a party with just 12 seats. At the time, many people thought that Netanyahu had reached the end of the road. Then Israel's second war in Lebanon broke out in 2006. People lost faith in the country’s leaders, and support for Prime Minister Ehud Olmert dropped to the single digits. Netanyahu played his cards wisely, presenting an official alternative without being overly aggressive. Every day he paid a visit to cities in the north, which had been targeted by Hezbollah’s rockets. He also gave interviews to the foreign press, becoming the country’s shadow foreign minister as well as shadow prime minister. Even people in the center of the country appreciated this approach so that within just a few weeks every poll named Netanyahu as the leading candidate for prime minister.

Of course, Netanyahu acted very differently from behind the scenes. He encouraged and supported anti-government protests and put Bennett in charge of these “special assignments.” In fact, even today Bennett is unwilling to talk about what really happened.

Today, Bennett seems to have adopted Netanyahu’s old playbook. He takes to the streets and meets with victims of the coronavirus, and he attacks the government and its leader. He calls on the country to close ranks and speaks about the virtues of “togetherness.” In other words, he offers a mirror image of Netanyahu, who is seen as divisive and incendiary and as someone who is trying to stop the protests against him just to avoid criminal charges.

In many ways, the wave of demonstrations, led largely by the left, have served Bennett directly rather than Netanyahu’s other main rivals like Yair Lapid and Yisrael Beitenu leader Avigdor Liberman.

At this point, it seems obvious that Bennett is a way station of sorts for everyone disappointed with the Likud and the Blue and White parties. The fact that he is careful to downplay his most extreme positions on the peace process and the courts seems to be helping him. Nor does anyone know who will appear on his party’s list in the next election. In that sense, Yamina is the kind of party that is full of hot air but will likely drop in the polls as soon as it is forced to give clear answers. Right now, one of the major questions is whether he would be willing to sit in a new Netanyahu government. Bennett likes to answer that if that were to happen, he would be prime minister. As the next election gets closer, however, he will need to be more specific. If he rejects Netanyahu categorically, he could lose those voters for appearing to collaborate with the left just to bring Netanyahu down. On the other hand, he will also have to answer whether he would be willing to sit in a government with the ultra-Orthodox. Avigdor Liberman has already announced that he would not sit with the ultra-Orthodox under any circumstances. It is hard to imagine Bennett risking such an unequivocal message. It would stand in direct contrast with the message he is trying to relay of unity between the right and the left and between the religious and the secular.

That is the trap that Bennett now faces. Nevertheless, even if he does lose some seats, he seems to portend the end of Netanyahu’s long reign as the undisputed leader of the right.