Alliance with ultra-Orthodox could bring Netanyahu down

Israelis are furious with the ultra-Orthodox, who have opened their education institutions despite high rates of coronavirus infection. 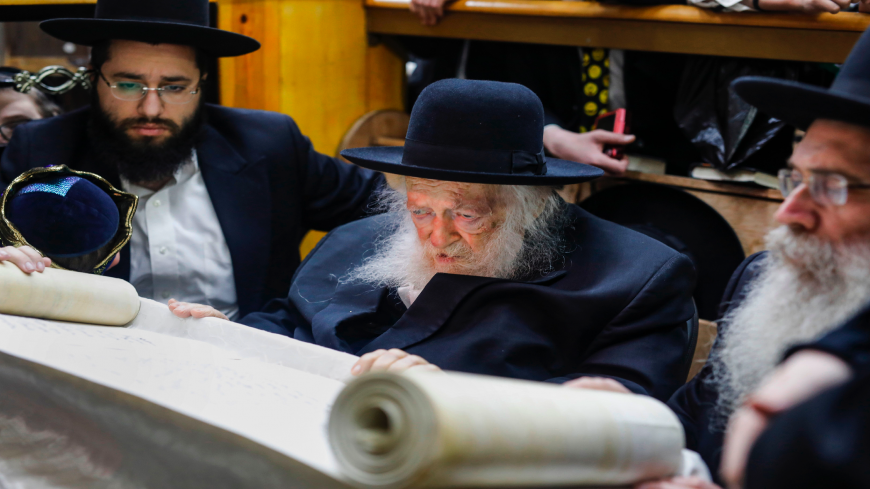 Rabbi Chaim Kanievsky (C), 93 years old and one of the main spiritual leaders of ultra-Orthodox Jews, reads the book of Esther during the feast of Purim at a synagogue in the Israeli city of Bnei Brak on March 20, 2019. - MENAHEM KAHANA/AFP via Getty Images

Prime Minister Benjamin Netanyahu has been suffering from a debilitating headache over the last few days, in the person of the 92-year-old leader of the Lithuanian faction of the ultra-Orthodox sector, Rabbi Chaim Kanievsky. On the night of Oct. 18, the rabbi ordered that his community’s school must be opened at once. His ruling ran counter to the government’s instructions for the nationwide lockdown exit plan, set in place to help the country get through the second wave of the coronavirus.

Most people were furious about the rabbi’s decision. Some 2 million students have been forced to spend the last month at home to prevent the spread of the pandemic’s second wave. And yet dozens of ultra-Orthodox schools are acting in blatant disregard of the government by bringing their students back prematurely. When Netanyahu appealed to Kanievsky’s parliamentary representative, Knesset member Moshe Gafni (Yahadut HaTorah), he was informed outright that Gafni and his community take orders from Rabbi Kanievsky only.

Just two weeks ago, Kanievsky himself fell ill with the coronavirus but has since recovered. Yet even his own experience with the virus hasn’t kept him from becoming the ultimate personification of the ultra-Orthodox sector’s disengagement and alienation from official Israeli policy and institutions.

Netanyahu may have a tight alliance with the ultra-Orthodox parties and their leaders — Kanievsky among them — but this is now harming him publicly and electorally. The overall impression is that he is not being tough enough with them and that the only people really paying the price for that are those who do follow the government’s instruction. Public ire at the ultra-Orthodox community is a direct product of the rates of infections. Most cities in red zones are ultra-Orthodox. In other words, the spread of the virus can be attributed directly to the violation of official orders, public prayer services, weddings and school openings. All of these come at a steep price.

A poll released by Channel 13 on Sunday found that over 60% of the public believes that decisions about lifting the second closure are being made for political, rather than professional, reasons. The poll also found that Netanyahu has been treading water when it comes to the number of seats he would win if elections were held now. While he hasn’t collapsed entirely, people now believe that Yamina party leader Naftali Bennett is the one political leader who takes a practical approach to the coronavirus pandemic and that he is benefiting from the public lack of trust in the Netanyahu government. The shrinking gap in polls between the Likud and Yamina is certainly worrying to Netanyahu. While Netanyahu’s Likud would win 27 seats, Bennett’s New Right party is not far behind with 24 seats in the polls.

Netanyahu is certainly well aware that any perceived submission to the ultra-Orthodox can be potentially damaging to him. That is why he has spent the last few days calling on the ultra-Orthodox to follow the rules. He has even warned that he would take steps to enforce them, but that is probably nothing more than an empty threat. The prime minister is caught in a cruel trap. If he does take steps against the ultra-Orthodox, he will lose their support, and without that support, he will no longer be able to continue in office as prime minister. What makes this situation especially dire is that he has a criminal trial for bribery hanging over him. On the other hand, if he does succumb to the ultra-Orthodox, he is likely to lose large swathes of his own electorate.

The situation is expressed succinctly in a cartoon that appeared in Haaretz on Oct. 20. It shows the elderly Rabbi Kanievsky, with his grandson beside him, holding out a colorful coronavirus ice cone. The caption has Kanievsky saying “Third time, ice cream” — the Hebrew equivalent to “Third time’s a charm.” The message is clear: As a result of his refusal to abide by official ordinances, a third closure is only a matter of time — and the cost to public health and the economy will be borne by those people who do follow the ordinances.

The ultra-Orthodox community was livid. Journalist Avi Rabina tweeted: “The cartoon is infuriating and disgraceful. A caricature mocking a Muslim or Christian spiritual leader would not be published without creating a tumult.”

But the secular community and even large parts of the religious and traditional communities feel no empathy for the rabbi and his followers. In fact, they are running out of patience. The coronavirus crisis has brought old disparities in the ways that the burdens of citizenship are shared between the ultra-Orthodox and secular communities back to the forefront of the public discourse, including such hot-button issues as serving in the military or receiving state stipendiums. If the debate has died down over the last few years, it has resurfaced in all its fury over the last few days. Business owners who have paid taxes all their lives are going bankrupt because of the closure and other government ordinances, while one sector of the population, the ultra-Orthodox, acts as if they have total autonomy.

Barak Eilam is CEO of Nice, one of Israel’s biggest computer companies. Last July, he hired 450 new workers despite the coronavirus crisis, citing his company’s policy of responsibility for others. Yet even he seems to have had enough, as a recent Facebook post by him seems to indicate: “Congratulations to Rabbi Kanievsky and all his supporters on successfully declaring their independence, with the support of Israel’s prime minister. It was a very instructive lesson in how 12% of interested parties can conduct a hostile takeover without opposition. P.S. Update me when you have a chance as to whether we continue to hand our tax money to them as usual, or if there is some new way to provide them with a steady flow of money.”

Netanyahu’s political rivals also realize that this is Netanyahu’s sore point, so they continue to batter him about it. Opposition leader Yair Lapid tweeted: “Everything is politics with you. It was because of politics that you failed to deploy the security forces on time. It is because of politics that you are not enforcing government ordinances in the ultra-Orthodox towns. You are letting anarchy rule.”

In a speech to the Knesset on Oct. 19, Lapid said: “If I was prime minister, educational institutions that failed to follow the ordinances would not get a 5,000 shekel fine. They would be fined 100,000 shekels. The next time it happened, they would be denied all budgets. Any educational institution that fails to follow the ordinances will wake up the next morning to discover that they won’t be getting another penny from the state. This is not intended to attack the ultra-Orthodox. This is intended to help the ultra-Orthodox. This will save their lives.”

Chairman of the Yisrael Beitenu party Avigdor Liberman has attacked Netanyahu about this very issue on an almost daily basis. When the Knesset’s Finance Committee approved funding for yeshivas this Monday, he tweeted: “Every day, the government surrenders [to them]. Every day is a holiday for the ultra-Orthodox.”

Yet even the political leaders of the ultra-Orthodox factions are helpless in dealing with communities in crisis. Shas Party leader Aryeh Deri recently warned Netanyahu that the ultra-Orthodox community will rebel against coronavirus ordinances. What is worth noting is that these politicians also realize that they are headed in a bad direction and that if Netanyahu does fall, they could find themselves out of the government. The problem is that they are also being held captive by their base. In reality, they are caught in a trap that could cause Netanyahu’s alliance with the ultra-Orthodox to come tumbling down, burying him — and them — in its ruins.