Netanyahu challenged from the right, not from the left 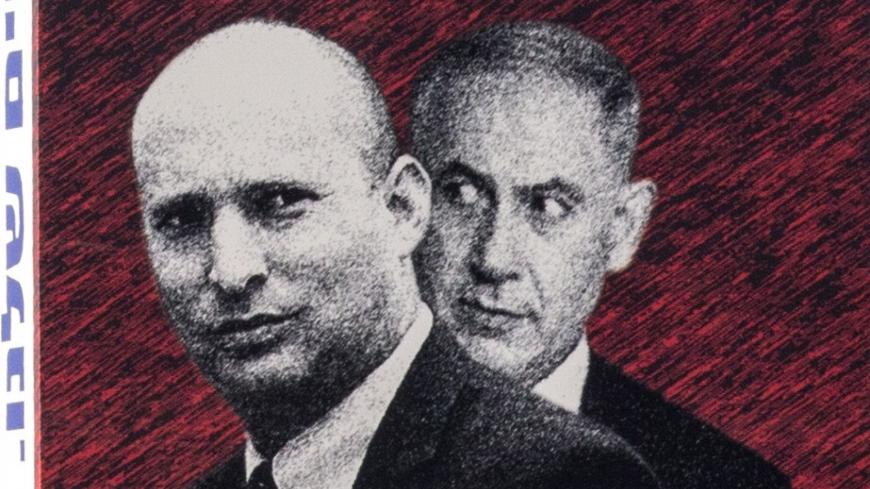 Polls published in recent days dealt a harsh blow to Israel’s political left. The next elections might feature a right-wing vs. right-wing duel instead of a center-left challenge to Prime Minister Benjamin Netanyahu.

According to these polls, Yamina party chief Naftali Bennett is now considered by many Israelis as the principal alternative to Netanyahu. Bennett is ranked second, after Netanyahu, as the person most suited to serve as prime minister. In fact, Bennett passed all the leaders of the center-left camp, including opposition chair and Yesh Atid-Telem leader Yair Lapid, and Alternative Prime Minister and Defense Minister Benny Gantz, who also serves as Blue and White party chairman. Bennett also does better than former Chief of Staff Gadi Eizenkot, who is warming up on the sidelines while deciding whether to enter the fray in the next election.

Given this ranking, the Yamina chairman is preparing to announce his candidacy for prime minister in the next election, which will likely be sooner than anticipated.

Any focus on Bennett’s remarkable achievement is easy to understand. He flipped the tables within a matter of months, transforming himself from the head of a marginal, essentially irrelevant right-wing party who ended up getting tossed into the opposition into an apparent big winner. In that short time, he tripled his potential strength in the Knesset from six seats to 15-19 seats.

The path he took to become the best alternative to Netanyahu is no less remarkable, even if it was his plan since he first entered politics in 2013. Even the most right-wing voters didn’t consider him suitable for the position at the time, certainly not with Netanyahu ruling over the right-wing camp so high-handedly. Bennett was always seen as the head of a satellite party of the Likud, as Netanyahu’s disciple, and even as a pale shadow of the real leader, and as someone would act according to the prime minister’s whims under any and every circumstance.

After the March elections, Bennet found himself outside of the government. Losing his short-term position as defense minister, he again reached a low point. But Bennett saw this as an opportunity. Left outside the coalition, he could now position himself as an alternative leader.

More so, with Netanyahu failing to deal effectively with the second wave of the coronavirus, and with demonstrations against the government intensifying, Bennett gained increasing support. Of course, Bennett did not just wait for things to happen — he fanned the flames of discontent with the government. He identified a political vacuum in the management of the coronavirus crisis, and was quick to step in, thus becoming the opposition’s own “Mr. Coronavirus.” Bennett had no ministry, no political status or position. Nevertheless, he took to the street and presented his own plan to handle the crisis. He ran from one TV studio to the next and seeded social networks with his solutions.

On Aug. 5, Bennett addressed the Knesset. Netanyahu opened the Knesset debate, with Lapid officially responding as the opposition chairman. But Bennett made a point of depicting himself on social networks as the speaker “after the prime minister.’’

Bennett’s remarks from the podium were especially intense. They certainly left a greater impression than anything Lapid said. Firing a flurry of toxic arrows at the coalition’s tender underbelly, Bennet cried, “All the associations are crumbling. … Handicapped children are left without any solutions because you fight with each other. … Have you lost your minds? What else do I have to do? What? God, help us! ... Why haven’t you transferred any money to them yet? You’ve been in government for 80 days already! You should be working day and night. When I was defense minister, I worked on the Sabbath, I violated the Sabbath because lives were at stake. Well, lives are at stake here, too! People are dying. ... Get a hold of yourself and realize that our people are dying!”

Bennett is now riding the crest of the wave. The weaker Netanyahu gets, the stronger Bennett is. Two days after Bennett’s raging speech, Channel 12 created a stir by releasing the results of its poll on suitability for the position of the prime minister. The only person to come close to challenging Netanyahu as the top candidate to be suitable for prime minister was Bennett. Likud voters are shifting to him, and they are not the only ones. Even the soft right, which voted for Blue and White under Gantz, are suddenly realizing that they could live with Bennett as an alternative.

The results of this poll are dramatic, and not just for Bennett. They show how deeply entrenched Israelis are in the right. Even when they are disappointed with the prime minister, they prefer to move further right by supporting a former Netanyahu protege, Bennett. Meanwhile, with the collapse of Gantz, the center-left not only lacks an alternative to take over the government from Netanyahu. It has also failed to create such an alternative. Try as he might, Lapid continuously fails to break through an invisible barrier. No matter what he does, he isn’t deemed suitable to lead the country.

Bennett arrives at this round against Netanyahu much tougher, stronger and braced for a fight. The dilemma he faces is what to do next. After the next election, should he still recommend Netanyahu to form the next government? He seems to have resolved that problem in the most elegant way possible. The answer is “no”; he will recommend himself. This will remain a valid solution as long as the gap between him and Netanyahu continues to shrink. On the other hand, as soon as Netanyahu goes back on offense, all of that could change. Bennett could lose supporters. If the past has taught us anything, it is that when the moment of truth arrives, voters who rushed to answer Bennett’s call will rush right back to Netanyahu. Bennett believes that the coronavirus crisis has changed this voting pattern. The country may soon see if he is right.

The center-left frequently compares the current leadership crisis and the failures of the Netanyahu government to what happened in the aftermath of the Yom Kippur War in 1973. That brought about a drastic change in Israeli politics. It saw the downfall of the left and the rise of the first right-wing government in all of Israel’s history.

Only time will tell how serious the government’s failures really are. The one thing that can be seen is that the current crisis has not pushed the center-left to center stage. In fact, the bloc’s failure to provide a new alternative to Netanyahu is actually strengthening the right. Netanyahu can find comfort in this, because Bennett, unlike Yisrael Beitenu leader Avigdor Liberman, is unlikely to break ranks entirely.

On the other hand, the one thing that leaves Netanyahu worried is the realization that the stronger Bennett gets and the more the prime minister grows dependent on this upstart new leader, the more likely Bennett is to demand a rotation with Netanyahu in the prime minister’s office. Bennett seems to be aiming at that.