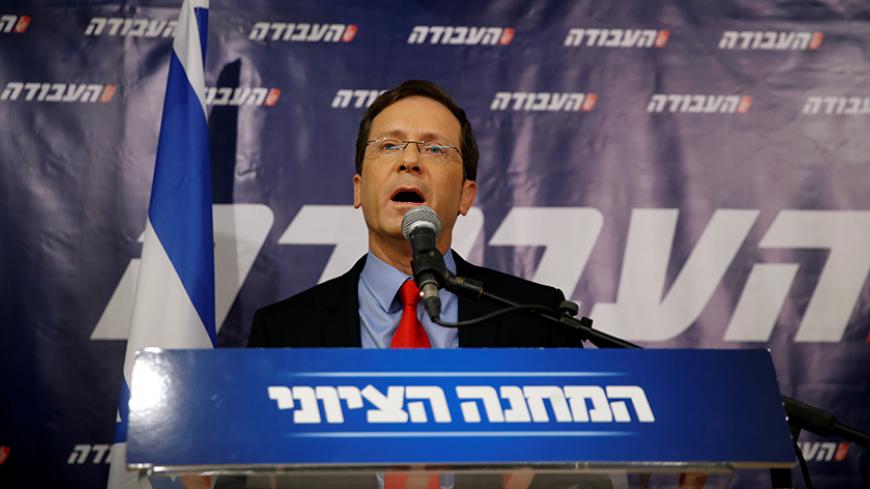 Isaac Herzog, leader of the Zionist Union, delivers a statement at the party headquarters in Tel Aviv, Israel, May 18, 2016. - REUTERS/Baz Ratner

This serious coalition crisis is sending shockwaves across the Israeli political system. It could have been the center-left's greatest hour, but the leaders of that bloc — Isaac Herzog of the Zionist Camp and Yair Lapid of Yesh Atid — failed yet again in presenting a clear and sensible alternative to Netanyahu's current government and the ideology of the right. When faced with the heated clash between the prime minister and the finance minister, Herzog and Lapid decided to act separately, instead of consolidating forces.

As soon as Netanyahu dropped his political bombshell and announced on the evening of March 18 that if his coalition partners do not meet his demand to shut down the corporation, he would call an early election, Lapid and Herzog should have held an urgent meeting and found a way to work together to oppose Netanyahu. Doing so, if only temporarily, would have granted momentum to their political offensive and resounded with political power.

But Herzog decided to call Kahlon instead. It was leaked to the media that the two men discussed the possibility of putting together an alternative government without heading to elections, using an obscure parliamentary procedure known as "constructive no confidence" (a variation on a motion of no confidence). Shortly afterward, Lapid made it clear that he would not participate in the move. He made a point of distancing himself from Herzog and thereby being branded as a collaborator with the left. Nevertheless, Herzog continued to peddle his phony idea of an alternative government to the media, even though Kahlon would not give him a green light.

On March 19, just one day after the crisis erupted, Herzog was interviewed by Ynet. When asked about his phone call with Kahlon, he replied, "We agreed to look at all sorts of options, including 'constructive no confidence,' which means an alternative government. I call on Kahlon to resign from the government. … There are voices and sources [calling for this] in the Likud as well. People are fed up with Netanyahu's leadership. It is intolerable."

It is rather embarrassing that this was the extent of the chairman of the main opposition party's entire arsenal in dealing with the latest coalition crisis. He simply released a few imaginary scenarios, while relying on anonymous sources in the Likud, who may or may not join him in bringing down Netanyahu. It was a slack and implausible response. Herzog, who is himself struggling to survive in Labor Party primaries this July, seems to have assumed that this was how he could create an alternative.

According to the latest polls, Lapid would be Netanyahu's main rival for prime minister in the next election. He acted as one would expect from an opposition leader. "In a democracy, the only way to change the government is through elections," his staff stated in response to Herzog's comments. "We won't lend a hand to these tricks."

Lapid followed the same line during the week. He distanced himself from the Public Broadcasting Corporation issue, even though he was one of its architects, along with Public Security Minister Gilad Erdan. The reason for this is that Netanyahu has already branded the Public Broadcasting Corporation as "left wing." Lapid, who is making every effort to win votes from the right, does not want to be perceived as defending a left-wing organization.

While Lapid may make a point of presenting himself as the leader of the center with a nod to the right, most of his electorate comes from the center-left. He is soaring in the polls at the expense of seats lost to him by the Zionist Camp. As such, his attempt to distance himself from the left is not only artificial. It is also damaging to his political bloc's common effort to create an effective force that can counter the right.

Lapid defines himself as a centrist. He makes a point of noting that he grew up in a home that admired the late Likud leader and Prime Minister Menachem Begin. In other words, he grew up in a right-wing environment. While various polls show that he has managed to win over voters from the soft right, those numbers are not high enough to shift the balance of power between the two competing blocs. Furthermore, if the leaders of the ultra-Orthodox parties — who often tip the political balance in Israel, joining either the right or the left — are forced to decide after the next elections whether they want a government headed by Lapid or a government headed by Netanyahu, it is most likely that they will reject the leader of Yesh Atid. After all, they have not yet forgiven him for the economic and other decrees he imposed upon them when he was finance minister.

The problem is that it wasn't just Lapid and Herzog who acted separately. Torn as it is over elections for the party leadership, the Labor Party itself was unable to present a cohesive and unified front. Each claimant to the party leadership responded separately, because they each tried to present themselves as the best alternative to Netanyahu. Former Minister Avi Gabbay and Knesset members Amir Peretz and Erel Margalit released belligerent statements about Netanyahu's disastrous government and called for new elections, but they did it on their own behalf. This only leaves the question: Is the path of the opposition, the path that should offer an alternative to the right-wing government, the path taken by Gabbay, Peretz, Margalit or Herzog?

The leader of left-wing party Meretz, Zehava Gal-On, also acted independently when she attempted to submit a motion of no confidence in the Knesset. Her motion was rejected on procedural grounds.

Ever since the 2009 election almost a decade ago, the center-left has been unable to present a united front against the right. As a result, it has missed out on every opportunity to win the government for itself. The fact is that the center-left parties have been acting in a scattered and divided manner in just about every possible area. They do not coordinate in their coalition negotiations after elections, and they fail to support a single candidate to lead the camp.

The public that supports the center-left would benefit if its leaders would cooperate against the Netanyahu government over the Public Broadcasting Corporation crisis. Instead, they have been splitting their efforts, their messages and their strategies for action. In fact, the leader of the big opposition party and the leader of the centrist party chose the same goal — each in his own way.