Why is Israeli Labor shifting back to leftist agenda?

Israel’s Labor Party is returning to its left-wing agenda, readopting the vision of peace of late Prime Minister Yitzhak Rabin. 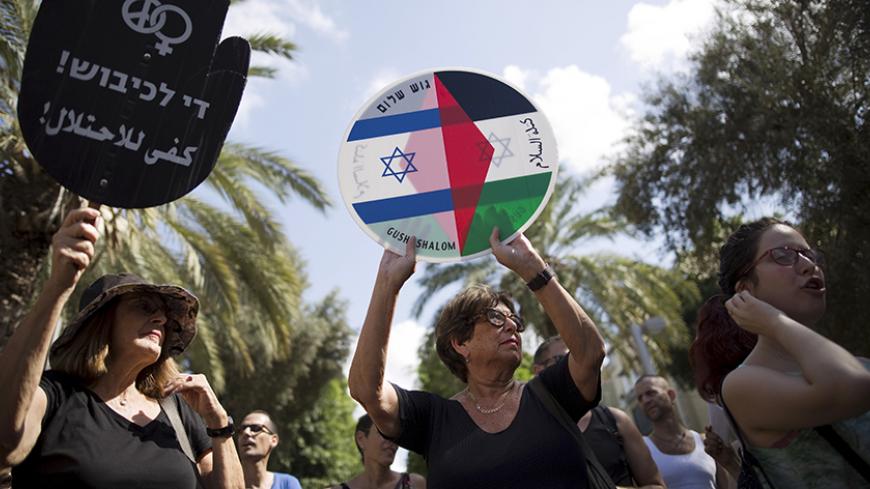 "The term 'leftist' has become a curse word in Israel, and we're going to stop that. Yes, I am a leftist, and I am not embarrassed about it. Only after we stop lowering our heads and feeling ashamed of who we are, will we win." The text appears in a video clip, "The leftists are on their way back," released April 18 by Knesset member Erel Margalit as part of his campaign for leadership of the Labor Party, the large partner within the Zionist Camp. And it is yet another expression of what is turning out to be the end of an era of political ambiguity in the Labor Party.

On July 4, Israeli Labor will elect a new leader to take them to the next election. The most interesting and important phenomenon in this race is that each candidate is highlighting a diplomatic agenda based on that of former party chair and assassinated Prime Minister Yitzhak Rabin. For the first time in years, they are not trying to run away from attempts to brand them as "left." In fact, quite the opposite is true.

Former Defense Minister Amir Peretz is a diplomatic dove and always has been. He is presenting a well-formulated doctrine based on the principle of diplomatic negotiations that led to separation from the Palestinians. Knesset member Omer Bar-Lev, a former chief of the Matkal commando unit, is a zealous advocate of a two-state solution. So is former Minister of Environmental Protection Avi Gabbay. Then, of course, there is Maj. Gen. Amiram Levin, who led a campaign in support of the left-wing group Breaking the Silence and could easily align himself with the left-wing Meretz Party, too. Even the current chair of the Zionist Camp, Isaac Herzog, has made the transition. Just last year, he announced that there was no one to talk to on the Palestinian side. He has since realigned himself firmly with left-wing supporters of the diplomatic process.

The party, which has reached an unprecedented low in the polls (10 seats), is undergoing a process that could prove to be much more than a pre-election gimmick. It distinguishes the Labor Party and the Zionist Camp from Yair Lapid's centrist Yesh Atid, which is doing everything it can to avoid being associated with the left. Such a strategy should win the Labor Party some of the seats that it already lost to Yesh Atid. It should also reformat the Israeli political system for many years to come.

"I — and plenty of other Israelis — we're leftists, plain and simple," says Margalit in the video clip. "And no, it's not a curse word. Leftists built this country. Leftists established the nuclear reactor. Leftists made peace with Jordan. Leftists won all of Israel's wars until now. Leftists have served as the chiefs of staff of the Israel Defense Forces, as heads of the Shin Bet and as heads of the Mossad, who fought against terror and won." It is a carefully crafted text, and it is safe to assume that its impact on Labor Party members was tested beforehand on a slew of focus groups. Labor voters constitute a very clear ideological group, which sees itself following in the footsteps of Rabin. Over the past few years, many of them have grown frustrated with the party's attempts to make gestures to the right in the hope that this could win them a few seats from the rival camp.

One person who was blunt in advocating this tactic of pandering to the right is Knesset member Shelly Yachimovich. As a former chair of the Labor Party, she chose to downplay its diplomatic messages in the 2013 election. Even before, the diplomatic positions that she presented in October 2012 at a meeting with former French President Nicolas Sarkozy were very similar to those of Prime Minister Benjamin Netanyahu. Among the positions that Yachimovich supported as preconditions for negotiations were no freeze on settlement construction and the demand that Palestinians recognize Israel as a Jewish state. All of that was intended to win votes from the right for the Labor Party.

The tactic failed in the election. Under Yachimovich's leadership, Labor reached the finish line with just 15 seats and remained in the opposition. Herzog, who succeeded her, also tried to flirt with the right, in his case, after the failure of the Zionist Camp in the last 2015 election. The party began to crash in the polls. After watching sadly as votes shifted to Yesh Atid, Herzog adopted the same strategy of distancing himself from those markers identified with the left, while making gestures to the right.

Herzog launched his new political program in January 2016, presenting it as a kind of "rude awakening" from the illusions he had, supposedly in response to the intifada of individuals that started in October 2015. Peace can wait, Herzog determined. Palestinian President Mahmoud Abbas is no partner for diplomatic negotiations. Statements such as these may have been pleasing to the Israeli right, but even then the flood of voters fleeing the Zionist Camp was unstoppable. Polls showed that Lapid's party continued to grow in popularity at the polls at the Zionist Camp's expense.

In general, Lapid's entry into the political arena and his efforts ever since the last election to win the support of moderate voters from the Likud posed a complicated challenge to the Labor Party. On the one hand, Lapid has fled from any association with the left, as if it was some infectious disease. On the other hand, he has managed to win over many voters from that camp. This explains why the Labor Party has been so tempted to imitate him.

Now, three months before the primaries, each of the six candidates are presenting themselves as clearly aligned with the diplomatic left and as following in the legacy of Rabin. "Lapid will disappear with the wind, because he is trying to imitate Netanyahu. The options are either the path taken by Yitzhak Rabin or the path taken by Netanyahu. We choose the path taken by Rabin. If we try to look like Lapid, we will lose like Lapid," Margalit predicts in his video clip.

In an appearance before the members of the Institute for National Security Studies this March, Peretz said, "Mahmoud Abbas is a partner for a peace agreement in the future and for routine security cooperation now. He was a partner as soon as he entered the office of Palestinian president over 10 years ago, and he and his successor will be partners in the future, too, apparently." According to him, "The truth is well-known. Every child can recite it. The solution to the conflict will be two states for two people, with borders based on the 1967 lines, but with minor adjustments and the reciprocal exchange of equal territory, which will leave the settlement blocs and most of the settlers within the territory of the State of Israel."

Levin has also spoken extensively about the urgent need for a diplomatic arrangement. "Continuing to keep the occupied territories will turn Israel into an apartheid state with a Jewish minority right in the heart of a Muslim region," he said at the beginning of the year.

This new branding of the Labor Party as the main party of the diplomatic left, regardless of the person chosen in July to lead it, should have implications for Lapid as well. It is highly likely that given the new circumstances, the Labor Party will win back some of the seats that switched to Yesh Atid over the last few years. The question is whether this approach will continue after the primaries for the Labor leadership or whether the party's new leader will be tempted to chase after votes from the right yet again. That would be more than just a mistake. It would be the deathblow for the Labor Party, which has failed to find its path in Israeli society ever since Rabin's assassination in 1995.