Labor leader Isaac Herzog is convinced that to defeat the Likud Party at the next elections, Labor must embrace a more aggressive and assertive security image. 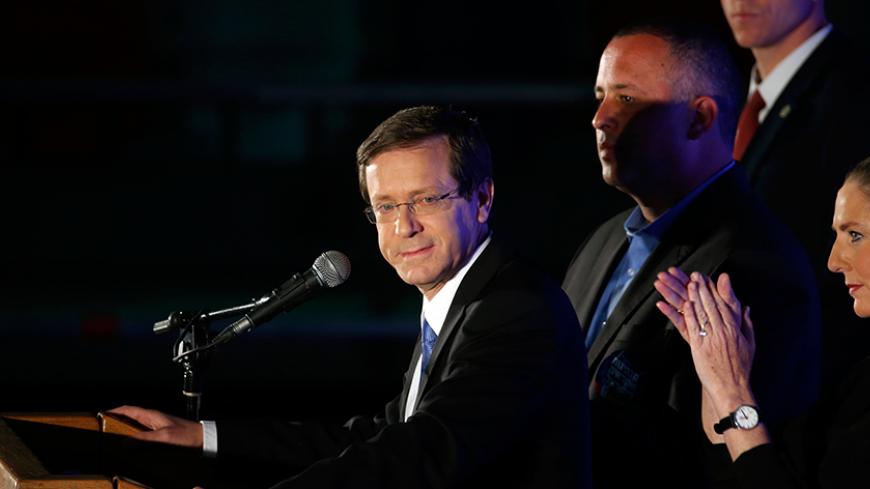 Isaac Herzog (L), head of the center-left Zionist Camp, stands in front of his wife, Michal, as he addresses supporters at party headquarters in Tel Aviv, March 18, 2015. - REUTERS/Ronen Zvulun

There was a surprising statement on the evening of July 20 by Labor Party chairman Isaac Herzog. His assertion that “from a security perspective, the disengagement [from Gaza] was a mistake” received considerable interest, and rightfully so. Herzog, head of the Zionist Camp — a center-left electoral alliance between the Labor and Hatnua parties — and also chair of the opposition, made this comment to a right-wing audience at an event to mark 10 years to the disengagement. Thus, it seems that he continues his efforts to veer toward the political center with a wink to the right, and to rid his party of the left-wing image that has stuck to it over the past few years, and especially after the March 17 elections.

There was good reason that Herzog focused on the security angle, rather than the ideological angle, to explain why the 2005 Gaza disengagement was a mistake. According to all in-depth polls and focus groups conducted by the Labor Party both before and after the election, the party’s soft underbelly is the lack of a top-tier security figure in its ranks. Combined with its left-wing image and growing security threats, this means that it has a very slim chance of winning an Israeli election.

That is why Herzog uses almost every opportunity to reiterate his commitment to security matters. The same was true of the firm response he released after the Iran deal was reached. He said, “In regard to security, I am more extreme than [Prime Minister Benjamin] Netanyahu.” On another occasion, he spoke out against the screening at the Jerusalem International Film Festival of a controversial film about Prime Minister Yitzhak Rabin’s assassin, Yigal Amir.

This is not an easy period for the Labor Party or its leader. Its defeat in the election forced the party to conduct a reckoning with itself, and as usually happens in these situations, a finger was wagged accusingly at the party’s chairman. Though Herzog did win 24 Knesset seats (out of 120), he failed to lead the party to victory. Just like former Labor Chair Shelly Yachimovich after her electoral defeat in 2013, Herzog’s leadership is now being challenged. He can hear Tel Aviv Mayor Ron Huldai revving up his engines, and even more so, he can sense the feelers being sent out by former Prime Minister Ehud Barak. The latter feels that the party is eager to return to a more security-oriented agenda and is checking whether conditions are ripe for him to re-enter the foray. When Herzog says that he is more extreme than Netanyahu on security matters, he undoubtedly means Barak as well.

Both Barak and Huldai are highly regarded when it comes to security matters — particularly Barak, who was a former chief of staff and defense minister. (Huldai used to be a fighter pilot.) Having one of them aboard could offer the same combination in the Labor Party leadership as when the party actually won the elections. Both Rabin (1992) and Barak (1999) were widely recognized authorities on security matters and managed to sway voters from the right to cast their ballots for the Labor Party.

The fact that Barak is sending feelers about coming back to politics and back to the Labor leadership seems especially remarkable. In January 2011, he split the Labor Party that he headed and formed a new party, Atzmaut (Independence), with four additional Knesset members. The move was the final blow after almost two years of internal squabbling. The fight pitted insurgents — who included Knesset members Eitan Cabel, Amir Peretz, Yuli Tamir and Ophir Pines — against Barak with his inner circle, which supported the party’s continued participation in the Netanyahu government, even though it put the diplomatic process on hold.

Barak had a hard time controlling his party and faction. He claimed that the insurgents, who often voted against the coalition, were leading Labor to the far left. On more than one occasion, Barak grew angry at some comment or other by then-Knesset member Tamir. He claimed that she was too far to the left, and he believed that she was chasing away voters. More generally, Barak believed that the Labor Party lost relevancy when it pulled leftward.

Barak’s Atzmaut party didn’t last. On the eve of the 2013 elections, with polls saying that his party wouldn’t pass the electoral threshold, he announced his retirement from political life.

Yachimovich replaced Barak as chair of the Labor Party. Though she injected new blood into the party, she also replaced a focus on security with a socialist socio-economic agenda. While the Labor Party had long been home to different factions, including hawks and doves, security issues always came first and foremost for the party’s leaders until Yachimovich took over. Even when former President Shimon Peres, a dove, served as prime minister, he had Rabin, a hawkish general, as his right-hand man. During Peretz’s tenure, it was former Minister Binyamin Ben-Eliezer who provided the right touch. Under Yachimovich, however, Labor became a kind of socio-economic niche party with a leftist reputation. In some instances, it was even seen as post-Zionist.

But Herzog and the Labor Party also have a rival within the opposition in the person of Yair Lapid. The chairman of Yesh Atid is trying to build himself up as the leader of the political center. According to internal polls conducted by various parties, he is actually succeeding. Lapid runs from anything that even smells left wing, as if it were a raging fire. At the same time, he is doing everything he can to stick the Labor Party with the reputation of being on the extreme left.

On the other hand, Lapid is like Herzog in that he suffers from an inferiority complex when it comes to security matters. That was why he used every available channel to convince former Chief of Staff Gabi Ashkenazi to take the No. 2 slot on his Knesset list and be his candidate for defense minister.

Meanwhile, there is a storm brewing in the Labor Party too. One group argues that it is necessary to hone the security aspect of the party platform. Apart from Herzog, it includes Knesset members Itzik Shmuli, Hilik Bar, Ayelet Nahmias-Verbin and Daniel Atar. They are pitted against a decidedly left-leaning group, which is painting the party in the colors of the leftist Meretz Party. That group includes Knesset members Yossi Yonah, Stav Shaffir and Zohir Bahalul.

Quite a few examples from the past few weeks indicate that the party is searching for the right way to move to the center of the political spectrum, ahead of the next elections. Just a few weeks ago, Shmuli delivered a very moving monologue about the Gaza flotilla. He was quoted by Israeli daily Haaretz saying, “When we are silent about the flotilla, or Basel Ghattas [Israeli Arab member of Knesset who took part at this last Marianne flotilla on June 29], or the BDS [boycott, sanctions and divestment] movement, that picture [of Rabin] practically falls off the wall. … When we are silent about the flotilla, that dovetails with the campaign against us in the election. It sends the wrong message to the public.”

Following these remarks, the party released a statement saying, “The Zionist Camp opposes the Gaza flotilla and any act in support of it.”

The Labor Party has experienced numerous transformations over the past five years. Barak retired, Herzog replaced Yachimovich, and the party ran together with Tzipi Livni’s Hatnua in the last elections. Nevertheless, it has yet to find peace with itself so that it can forge its own identity.