During the election campaign, Zionist Camp leader Isaac Herzog concentrated on a diplomatic agenda, but now, following the electoral failure, he tries to position himself at the forefront of the natural gas debate. 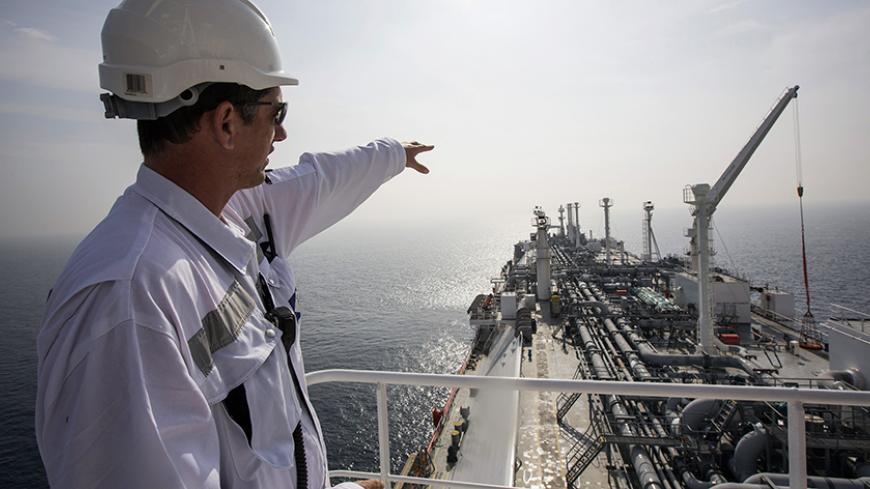 An officer points as he stands on a tanker carrying liquefied natural gas in the Mediterranean, off the coast of the Israeli city of Hadera, Jan. 22, 2014. - REUTERS/Baz Ratner

Isaac Herzog, opposition chairman and Zionist Camp leader, has been trying in recent days to spearhead the opposition to the gas compromise hashed out between the state and the gas companies — a compromise that the diplomatic-security Cabinet endorsed on June 25.

Several huge natural gas reservoirs were discovered offshore between 2009 and 2012. Since then, the government has been struggling to establish a balanced policy that sees the public interest as well as the struggle for social justice and recognizes the great deal of money the rich gas companies invested in those reservoirs.

Unable to rally the huge 59-member opposition (out of 120) since Netanyahu’s fourth government was sworn in, Herzog is dealing with internal tensions within his own party. He faces the possibility that he might be forced into holding a primary for the party leadership within the coming year. Breathing down his neck are Tel Aviv Mayor Ron Huldai, who confirmed that he was contemplating the possibility of running, and the Labor Party’s (later becoming the Zionist Camp) former Chairwoman Shelly Yachimovich, who's also said to be a potential contender.

Yachimovich turned the Labor Party into one with a clear social and socialist agenda. This marked change has been evident in the directions the party has taken in the sitting Knesset, which has forced Herzog to toe the line. The battle over the gas fields is clearly a case in point.

Even though Yachimovich is the most recognized party advocate in the struggle against the gas tycoons, Herzog has also started embracing Yachimovich’s approach on this issue. However, this potentially carries some risks for him. In the March 17 elections, he was able to secure 24 seats, with the support of voters from different sectors. Some votes came from former Kadima and Hatnua supporters. A smaller part came from Yair Lapid’s Yesh Atid Party constituency — a sector that does not necessarily espouse Yachimovich’s patently leftist economic and social worldview. Herzog was able to persuade this electorate to vote for him as the leader of the left, with the hope that he can replace Prime Minister Benjamin Netanyahu and bring about a diplomatic change.

But ever since the current government was sworn in and he officially became the chairman of the opposition, Herzog has been struggling to sink his teeth into a leading principle issue. When it comes to the diplomatic sphere, his standing is being chipped away by Lapid, who takes diplomatic journeys to market the regional initiative for an agreement with the Palestinians, and by Yisrael Beitenu Party Chairman and former Foreign Minister Avigdor Liberman, who lambastes the government for its weakness in dealing with Hamas. Even Tzipi Livni, the No. 2 in the Zionist Camp, occasionally succeeds in making headlines in the area of public diplomacy.

Some voices within Herzog’s party are calling on him to move more to the center of the political map so as not to become a leftist Meretz Party look-alike.

Consequently, after the United Nations Human Rights Council issued its June 22 report on Operation Protective Edge, Herzog abstained from attacking the government, partly not to appear too leftist. Furthermore, on June 23, the Zionist Camp disseminated a position paper with bullet points relating to the Gaza-bound flotilla, the main thrust of which is an objection to the flotilla or any act of support for it. Herzog was also the first to condemn the left-leaning actor Oded Kotler, who labeled Likud voters as “beasts” during an emergency meeting of Israel's cultural institutions.

Herzog is now learning the hard way that even though the opposition is large and consists of 59 Knesset members, it remains weak because it's polarized — between the Arabs and Liberman and even the centrist Yesh Atid Party. In addition, the party must deal with internal discussions concerning the desire of many members to dust off its leftist, not to say post-Zionist, image.

It's against this background that Herzog is clutching at the gas issue. Yet, it's uncertain that it is tailored to him or that it serves his personal agenda. Nor is it certain that this helps him to distinguish himself from Yachimovich within the Zionist Camp or that it will help him in the test of the general elections, if he gets re-elected by his party.

Unlike Yachimovich, Herzog has never viewed socio-economic issues in terms of black and white. Nor has he led struggles against tycoons as a worldview. A considerable part of the business milieu supported him in the recent elections. Incidentally, at her prime, Yachimovich garnered only 15 seats in the 2013 elections. She later ate humble pie for having pushed the diplomatic issues aside during her election campaign.

But it seems that Herzog has made up his mind to head the battle over the gas issue and not let Yachimovich take center stage. On June 25, he published a post on his Facebook page in which he demanded that the gas deal be put to a vote in the Knesset.

Herzog's demand is a worthy one, especially on the backdrop of recent publications and rumors over allegedly foreign or exterior influence on Netanyahu's motivation to conclude the gas saga and have the compromise signed.

His position notwithstanding, it is uncertain whether Herzog should disguise himself as Yachimovich in this regard. She is doing exceedingly well these days. Herzog would do well to let her and other Zionist Camp figures fight the gas battles and instead build himself as a diplomatic and security alternative to Prime Minister Benjamin Netanyahu, which is exactly what Lapid is currently trying to do.

The battle over the gas fields is not one-dimensional. The emerging compromise features important elements, such as the Israeli public’s ability to finally enjoy, after many setbacks, the huge gas reservoirs. Once developed, the fields will provide natural gas to the market. This, in turn, should bring down electricity costs while significantly reducing the production costs for industrial plants. As soon as the gas starts flowing, the taxes that the gas companies are obliged to pay will go into the state coffers in accordance with the conclusions of the 2011 Sheshinski Committee, which examined the gas resources issue. Consequently, the public will stand to gain. A compromise must be reached, and the sooner the better. Without a compromise, we should expect drawn-out legal battles and the risk of having the gas remain buried at the bottom of the ocean, as the companies might loss interest.

Yachimovich believes these are empty threats and that more can be extracted from the gas tycoons for the public’s benefit. The Zionist Camp’s attempt to dismiss the diplomatic-security considerations that were part of the government's motivation when concluding the gas compromise is also exaggerated and actually should be taken into account. For example, won’t the fact that Israel plans to supply Jordan with gas help bolster the relations between the two countries?

Hence, in terms of consolidating the Zionist Camp as an alternative, Herzog may have picked the wrong battle. It would be a mistake from his standpoint to disguise himself as Yachimovich.