Instead of piloting the opposition while the coalition is leading Israel toward harsh divisions, Zionist Camp leader Isaac Herzog is busy dealing with internal party bickering and threats to his leadership. 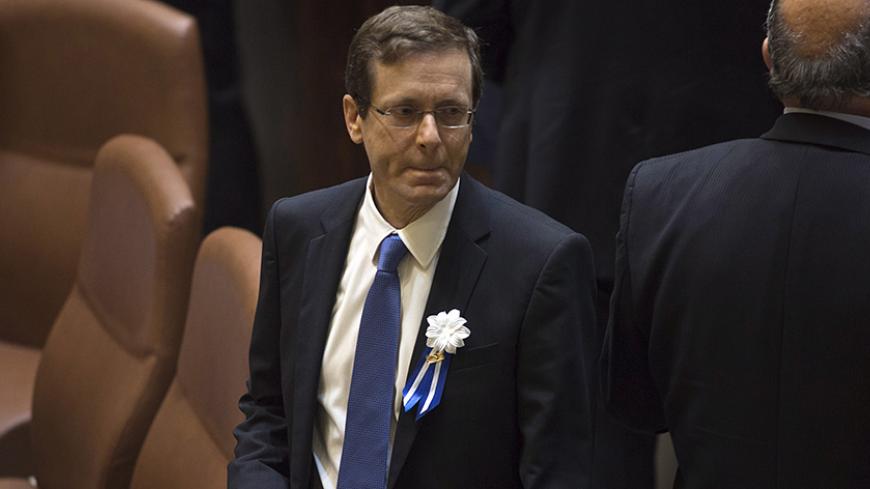 The Labor Party’s Central Committee will meet in Tel Aviv on Nov. 8. On its agenda: approving the addition of 450 new delegates. Ostensibly, this is a routine procedure by the Zionist Camp's major partner, with an easily anticipated outcome. But tempers are running so high in the party that it looks like it is reverting to its old, familiar ways of deposing its chair after losing an election.

This time, Zionist Camp leader and Labor Chair Isaac Herzog’s opposition within the party is arguing that the procedure he is spearheading to add 450 new delegates is against regulations. They claim that it is intended to empower him to tilt votes on critical issues in his favor. One of those critical issues is whether the party should delay its primary for the party leadership.

Herzog isn’t the first party chair to act this way. So did his predecessors Ehud Barak and Shelly Yachimovich. Now, with Herzog’s leadership being challenged both openly and surreptitiously, and with old familiar faces and a brand-new group of aspirants breathing down his neck, things look like they are getting out of control.

This is the only way to explain Herzog’s outburst at a Zionist Camp faction meeting this week, during an argument between him and Knesset member Yossi Yonah. The conflict began when Yonah asked to hold a discussion about bringing these new delegates into the committee, the same demand that key party activists had made in a letter to Herzog.

Herzog was certainly familiar with that letter. Most of it actually dealt with claims that there were irregularities in the election of Zionist Camp Knesset member Danny Atar as chairman of the Jewish National Fund. Herzog was furious. He felt as though Yonah was goading him by revisiting the Jewish National Fund elections, which resulted with many headaches and brought bad blood and factionalism back into the party. Atar, who was supported by Herzog, is considered part of the Old Guard of party hacks. He was running against Michael Bitton, the highly regarded mayor of Yeruham and a social activist who turned the southern development town into a major success story. Yonah and Yachimovich were supported by Bitton. The battle between Atar and Bitton turned into the latest iteration of the fight between new politics and old, with the latter winning at the end. Herzog marked his candidate’s victory as a win for himself. He vehemently rejected claims that the election for the head of the Jewish National Fund was flawed and should be investigated.

In this heated atmosphere, it didn’t take much to provoke an outburst by Herzog. When Yonah demanded to discuss adding new members to the Party Committee, an angry Herzog lashed out at him: “You have a lot of gall! It’s because of you that no one will vote for us in the next elections either. I won’t let you destroy the party from within.” Yonah responded, “No, you have gall! Don’t raise your voice at me.”

The members of the faction were shocked by Herzog’s rare outburst, in which he accused Yonah of perpetuating a culture of personal attacks in the party. Yonah responded that it was Herzog himself who brought this culture back. At the height of the fight, Zionist Camp co-leader Knesset member Tzipi Livni walked out, but not before saying that if the Labor Party wants to shoot itself in the head, she’s leaving. The glorious way in which she joined forces with the Labor Party before the last elections was supposed to bring her back to center stage and maybe even to the prime minister’s office, in a rotation agreement with Herzog. She never imagined it all coming to this. From all those grandiose plans, all she is left sitting with is a frustrated opposition. When she found herself in the middle of a fight that had nothing to do with her, Livni made the right decision and left the room. She had had more than her fair share of fights like that in her old Kadima Party.

As would only be expected, this raucous argument between Herzog, who is usually regarded as soft-spoken and pleasant, and Yonah, who had his own agenda, grabbed headlines and brought the Labor Party back to its old element. No one outside the party delved into the nuances of the argument over whether the new delegates should be added to the Central Committee. All that was left to bounce around the echo chamber was the sound of an impassioned and ugly quarrel reflecting the internal tensions in the party and the difficulties faced by its leader.

Herzog’s outburst comes in the context of the potential fight for the party’s leadership that is gathering momentum. Some eight months after the March 17 Knesset elections, Herzog is fast approaching the date on which the party’s constitution dictates that primaries must be held for the role of party leader (no later than 14 months after the election if the party does not form the new government). Apart from people like Yachimovich and Amir Peretz, two former Labor Party leaders who are considering another run, and Knesset members like Erel Margalit and Omer Bar-Lev, who are also considering running, various others like Tel Aviv Mayor Ron Huldai have also come up as potential candidates. Huldai is known to be considering a run and has come out openly against Herzog’s performance. Then there are two former chiefs of staff, Gabi Ashkenazi and Benny Gantz, who are also frequently named as possible candidates. And so, it is not surprising that Herzog feels like he is trapped in a party that is threatening to depose him and that internal pressure keeps rising.

Furthermore, every so often, polls show Herzog at the bottom of the list of potential leaders when ranked by their ability to confront the current wave of terror. And it is no secret that Herzog wanted to join the government of Prime Minister Benjamin Netanyahu. The prime minister, on the other hand, was wary of putting his fate in the hands of a party that could suddenly depose its leader and decide to leave the coalition. Netanyahu even said as much to Herzog.

As stated, eight months have passed since the election. Netanyahu seems to have gotten used to living with a narrow right-wing coalition, while Herzog has internalized that he will have to lead an opposition party. Nevertheless, even though he heads a party with 24 seats and holds the important position of chairman of the opposition, Herzog is still having a hard time. Despite making all the right speeches, his participation in demonstrations alongside local periphery council heads to protest the cuts to tax benefits and his frequent attacks against Netanyahu, he is still failing in his efforts to lead an alternative agenda to that of the government.

With Israel marking the 20th anniversary of Prime Minister Yitzhak Rabin’s assassination, this would have been the perfect time for the Labor Party to relaunch itself. After all, the party once proved that it could have a leader of Rabin’s stature, and his legacy is more relevant than ever.

Now more than ever, with Netanyahu’s government promoting an agenda that is so damaging to the country’s core democratic values and proving itself diplomatically impotent on the backdrop of the ongoing wave of terror, the Labor Party could flourish.

But the opposition shown by the Zionist Camp is floundering. While Yesh Atid head Yair Lapid and Yisrael Beitenu head Avigdor Liberman have managed to attain prominence within the opposition even with far fewer seats than the Zionist Camp, Herzog is busy morning, noon and night with his Sisyphean struggle for political survival and endless political maneuvering.