Isaac Herzog has presented in Israel and in France a new relevant diplomatic plan, which could bypass the current diplomatic stalemate while offering Israelis security. 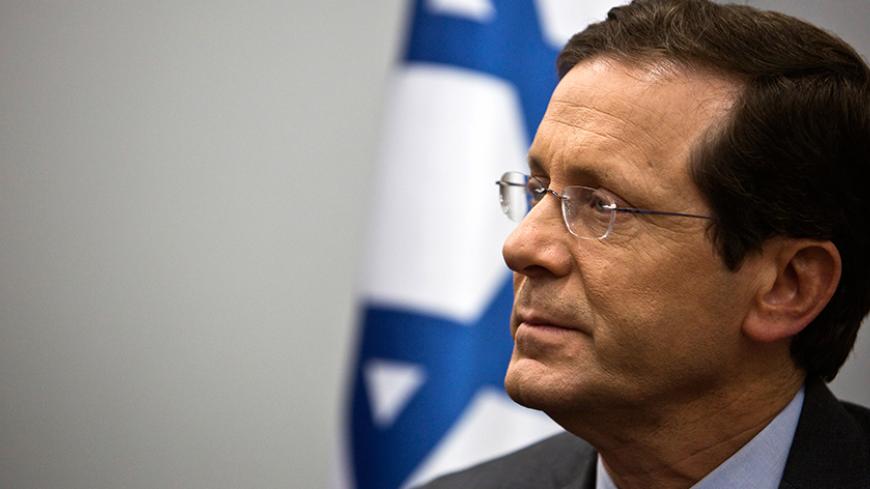 Isaac Herzog, co-leader of the center-left Zionist Camp, is seen at his party's headquarters in Tel Aviv, March 16, 2015. - REUTERS/Nir Elias

Knesset member Shelly Yachimovich headed the Labor Party from 2011 to 2013. During those two years, she led the party to a general election while eschewing the diplomatic platform of the most senior party in the Israeli peace camp and burying it deep in the closet.

Riding on the coattails of the 2011 social justice protest, Yachimovich went full throttle with a strategic approach that underscored the Labor Party’s social democratic banner de rigueur, while addressing the diplomatic issue as little as necessary. Thinking that if she focused only on social and economic issues while dimming her party’s character as the standard-bearer of a diplomatic compromise, she had hoped to garner support from right-wing voters who were not die-hard.

Acting much like Yesh Atid's Chairman Yair Lapid, she, too, tried to curry favor with the settlers. In his case, during the January 2013 elections, Lapid won 19 seats out of 120. In Yachimovich’s case, this approach collapsed, awarding her only 15 seats, having lost voters to the Meretz Party and Tzipi Livni’s now-defunct Hatnua Party.

Even back then, Yachimovich was slow to understand her colossal mistake. It was only in May 2013, 20 months after having been elected as chairwoman of the party and after realizing that a party primary was in the offing, that she found it appropriate to schedule a meeting with Palestinian President Mahmoud Abbas. “I have just met with Mahmoud Abbas for a tete-a-tete. Those who want to get an update should contact me,” she texted her bewildered faction members. Her text was sent in tandem with a press release she had issued right after leaving Ramallah. In talks with activists back in those days, she admitted to having been wrong not to give the diplomatic issue its proper weight.

But the forced meeting with Abbas and eating humble pie did not help her much. In November of that year, she was defeated by Isaac Herzog in the party’s primary.

This introduction is important to understanding the high-profile spat that has erupted this week between those two figures. In a vitriolic and derisive comment on her Facebook page Jan. 24, Yachimovich lambasted Herzog’s “separation plan.” What she was referring to was a meeting between Herzog and French President Francois Hollande on Jan. 22, in which the former argued that a diplomatic arrangement at this time could not be reached and which is why temporary alternatives had to be found. At no point did Herzog renege on his commitment to the two-state solution. Instead, he presented a diplomatic analysis to the effect that Abbas and Israeli Prime Minister Benjamin Netanyahu were trapped in an impossible political environment. Both of them are weak and refuse to engage in dialogue.

“It’s possible that some right-wingers are applauding Buji [Herzog] right now. To be honest, I don’t think so. This whole thing looks so unbelievable — to outflank Bibi [Netanyahu] from the right. … Just like that, in one fell swoop, you overturn a fundamental ethos that underlies our worldview?” she took a jab at him. Throughout her long-winded text, she made sure to call Herzog by his nickname in what appears to be an attempt to dwarf and ridicule him.

She continued, “I don’t agree with Buji and I disagree with his view that now is not the right time for negotiations. On the contrary. Mahmoud Abbas is not a lover of Zion but he could certainly be the last secular and pragmatic leader in the Palestinian Authority. To do away with the two-state vision and the pragmatic efforts to implement it in issuing a press release is such a radical and confusing step.”

In her post, Yachimovich failed to address the damage she herself had caused to the diplomatic discourse. “My diplomatic worldview has always been sharp and clear: Two states for two peoples. Palestinian neighborhoods are not — and will not be — part of Jerusalem and [we need] to implement the Saudi Initiative to the maximum extent possible,” she said, casually dismissing the charges leveled at her for currying favor with the settlers.

If Yachimovich’s diplomatic worldview is indeed so clear and dear to her heart, why didn’t she do anything to act on those ideas when she was the party’s leader? As chairwoman of the opposition with 15 seats, she could have done much more than just hold a belated meeting with Abbas, which had no follow-up. In 2003, toward the end of the second intifada and with just 5 seats to his name, Yossi Beilin — then a Knesset member and the leader of the Meretz Party — was able to provoke a keen debate in Israel concerning the Geneva Initiative. Even former Prime Minister Ariel Sharon’s adviser Dov Weissglass once admitted that the Geneva Initiative was one of the triggers of the 2005 disengagement plan, following which Israel pulled out of the Gaza Strip. Beilin had enough conviction and creativity to bring about a change despite having little political clout. To this day, the Geneva Initiative is an important milestone on the continuum of diplomatic plans, to broker peace between Israel and the Palestinians.

What Herzog has been doing over the past week is precisely a “Beilinesque” move — in the good sense of the word, trying to forge an avenue to bypass the diplomatic vacuum. He does not make do with hackneyed mantras such as the “two-state solution.” Rather, he is trying to push the envelope of the diplomatic discourse.

Herzog’s plan closely corresponds with the spirit of the Labor Party during the era of late Prime Minister Yitzhak Rabin. On the one hand, Herzog is presenting an uncompromising commitment to security during this time of a third intifada, while, on the other hand, he is proposing to manage the conflict until the dialogue can be resumed. As a temporary measure, he has proposed to “separate” from East Jerusalem’s neighborhoods in terms of security. This is certainly not a wink at the right or a capitulation to the likes of right-wing HaBayit HaYehudi Knesset member Bezalel Smotrich. Yet it does sound like an awakening and a pragmatic move, which might not be politically feasible because the right is in power, but one which could defy Netanyahu and his right-wing ministers should this plan succeed in eliciting public pressure.

The spat among the Labor Party’s top echelons proves that Herzog’s move might have succeeded. It has put his plan on the international agenda and he has no intention of letting up. Moreover, he distinguishes himself both politically and diplomatically from Netanyahu, reinstating the Zionist Camp’s relevance that was lost amid Lapid’s frenzied activity.

Seeming to brace herself for a showdown against Herzog in the Labor Party’s future primary (Labor is the main partner in the Zionist Camp), Yachimovich looks and sounds to be under some stress. Herzog was right to counter with the same derisive tone: “Do you think that if you tell the Palestinians tomorrow: ‘Hi, this is Shelly, let’s make peace,’ they will lay down their knives?”

This week, Herzog returned from a successful trip to Paris during which he met with France’s diplomatic elites who proposed to host a regional peace conference. Contrary to Yachimovich, Herzog cannot be blamed for having forsaken his commitment to the diplomatic process. Rather, he could be identified as the person who charted a new course and who realized he has to act against Netanyahu’s diplomatic vacuum — as he himself observed in an interview with Al-Monitor. ​