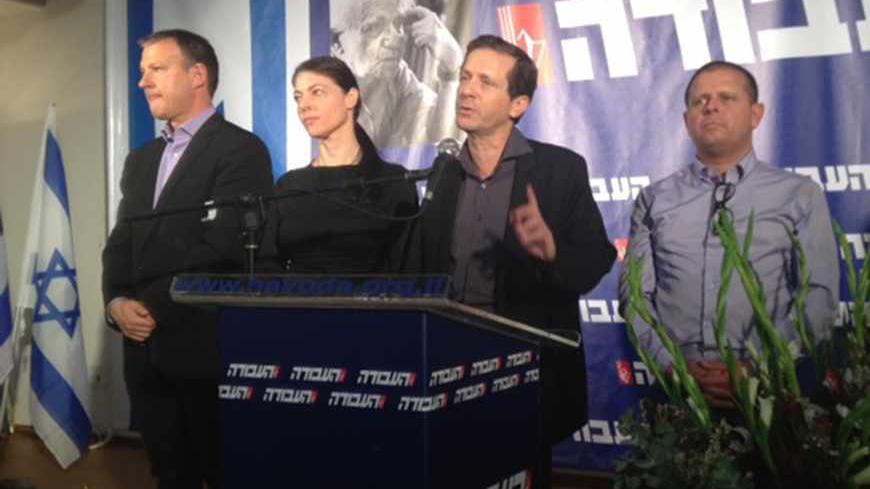 Isaac Herzog at his victory speech in Tel Aviv, after winning party elections for chairman of the Israeli Labor Party, Nov. 22, 2013. - Mazal Mualem

The first impact of Knesset member Isaac “Buji” Herzog’s victory in the primaries for the chairmanship of the Israeli Labor Party could be felt on Friday morning, Nov. 22. Moments after the final results were in, and the extent of outgoing Chairwoman Shelly Yachimovich’s defeat became known, party old-timers rushed to the Journalist House, Beit Sokolov in Tel Aviv. They were heading back to center stage. They were returning from an exile imposed on them for over two years.

These were the old familiar faces, who attended victory parties for late Prime Minister Yitzhak Rabin, President Shimon Peres and former Prime Minister Ehud Barak. They were there for every turnover that the party experienced in the long years that it failed to rise from its ruins and re-establish itself. Also present were senior Labor Party officials of the past who had disappeared completely from party life such as former Labor and Social Welfare Minister Raanan Cohen and former Knesset member Colette Avital.

It is this account from the sidelines of the turnover that could explain Yachimovich’s huge defeat. The outgoing chairwoman paid the price for distancing the movement’s old guard over the last few years, and for doing it so brashly. She paid the price for trying to obliterate the Labor Party’s DNA and establish a new party — the Yachimovich Party — in its stead. She surrounded herself with legions of extremely young activists, because she felt safe with them around her. But she lacked the good sense to keep Environmental Protection Minister Amir Peretz, former Defense Minister Binyamin “Fuad” Ben Eliezer, Knesset member Eitan Cabel and Isaac Herzog beside her, too.

Yachimovich always knew how to praise the party’s democratic structures under her leadership, when in fact, it was a one-woman democracy. During the Labor Party’s election campaign at the start of this year, she was patronizing in the way she cast aside anyone who dared to warn her of the consequences of abandoning the left-wing party’s diplomatic banner and of expressing diplomatic positions that might appeal to the right. She told anyone who expressed doubt and dared to ask her about it that Likud Party supporters would soon be flooding the Labor Party and supporting it en masse.

She accepted no help and refused to consult even with those who innocently offered her their support. On Nov. 22, as they stood in a packed hall in Tel Aviv blanketed with colorful confetti, those same people felt like they got their party back. They felt as if their Labor Party had experienced a hostile takeover during all those years that Yachimovich was its leader, and that she had disinherited them.

Yachimovich is a politician in every fiber of her being. She's a survivor, and when necessary, she can be a predator, too. However, on Nov. 21, she learned a basic but fundamental lesson on the enormous power that grudges and personal animosity can have in the game of politics. Hostility toward her convinced Cabel and Erel Margalit — both of whom considered running against her — to join forces in support of Herzog and help in his campaign. They came to the conclusion that of the three of them, he had the best chances of winning. Meanwhile, Fuad, Peretz and even Dalia Itzik helped out behind the scenes.

The new chairman of the Labor Party and incoming chairman of the opposition is the polar opposite of Yachimovich. He shares with and nurtures others; he is a uniter and a compromiser. It was not in vain that Cabel announced from the victory podium: “From now on, there is no more me but we. We are restoring our former glory.”

Despite what Yachimovich tried to claim during her campaign, Herzog has no intention of joining Prime Minister Benjamin Netanyahu’s government at any time in the near future. It is true that as far as Netanyahu is concerned, the incoming chairman is a much easier person to deal with, but such a scenario is not about to happen anytime soon. The diplomatic negotiations are stuck, and Herzog — like Yachimovich before him — plans to build his power base from the opposition.

Herzog is hardly the quintessential opposition leader. In the past, he was eager to join the National Unity governments cobbled together by former Prime Minister Ehud Olmert and Netanyahu. It will be interesting to see if he manages to transform the Labor Party into an effective opposition party when facing Netanyahu, Finance Minister Yair Lapid and Economy and Trade Minister Naftali Bennett.

Very soon, Herzog will discover that defeating Yachimovich was the easy part in his current political odyssey. He has taken over a middling and noninfluential opposition party with a confused sense of identity and an ongoing leadership crisis. He will stand at the helm of a problematic political brand, which has failed to break the 20-seat barrier ever since the 1999 elections. Knesset member Amram Mitzna, Peretz, Barak and Yachimovich all failed to restore the Labor Party to its position as an alternative to the ruling party.

The good news, as far as Herzog is concerned, is that the last elections proved that despite the conventional wisdom that overwhelmed the political system, the right wing is not in the majority in the country. A significant bloc among the center left still believes in the diplomatic process, but it has no political home and no leader deemed capable of serving as prime minister. Herzog is not there right now either. Only time will tell if he manages to survive to lead the Labor Party in the next elections. He might yet be deposed, just like his predecessors, if the polls show that he is not bringing home the goods.