Can Yachimovich Keep Her Job As Israel's Labor Party Leader?

Sources within the Labor party told Mazal Mualem that an initiative is being kicked around to hold "lightning primaries," to bring an “end to the Yachimovich dictatorship era.” 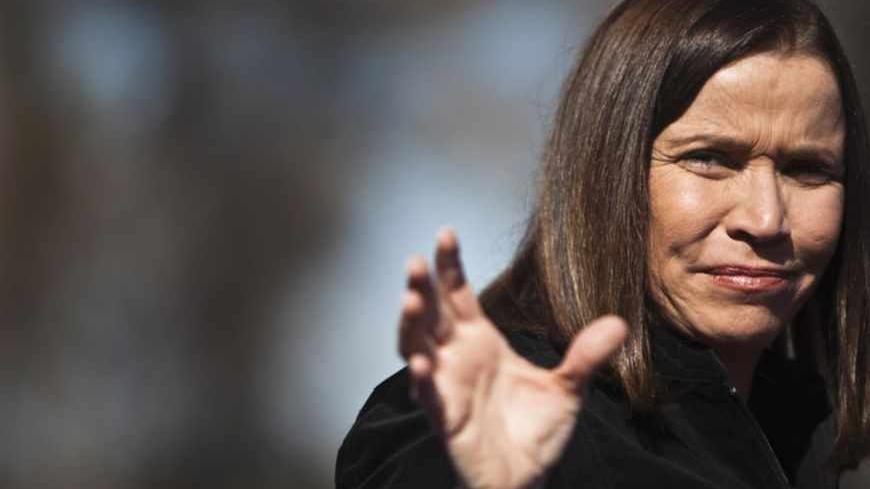 Labor party chairwoman Shelly Yachimovitch will need a lot of successful political maneuvering in the coming months, and some luck as well, to hold on to her job. According to some very high-level sources in the Labor party, an initiative is being kicked around these days to hold "lightning primaries," within a few months from today, in order to bring an “end to the Yachimovich dictatorship era.”

According to the Labor party’s constitution, if the party does not assemble the government after elections, primaries must be held to elect its leadership within 14 months. But now it seems that Yachimovich, who is viewed as being personally responsible for the failure in the elections, will be forced to deal with a demand for primaries a long time before the legal deadline.

The initiative for the "lightning primaries," which is still in its early planning stages, is based on the assumption that Yachimovich can be easily defeated — if all three of her competitors will unite forces and then endorse one of them. The three potential Knesset-member candidates to inherit Yachimovich’s position are: Isaac Herzog, Eitan Cabel and Erel Margalit. In fact, the three already function full-time as internal opposition plank to the chairwoman, and are publicly criticizing her for the way she runs things.

Histadrut labor federation Chairman Ofer Eini is expected to hold a key position in the plans to replace Yachimovich. Eini was Yachimovich’ ally not long ago, when he helped her defeat [now] Environmental Protection Minister Amir Peretz in the second round of the primaries for Labor leadership about a year and a half ago. Today he is among her greatest opponents and his feelings toward her, according to people in the party, “border on disgust.”

At the Labor party convention last Thursday [April 4], Eini spoke with restraint when he talked about Yachimovich, but it was clear that the honeymoon between them has passed and gone. “A party without veteran members and without the people who built it, will not succeed,” said the Histadrut chairman from the podium. He was referring to the fact that Yachimovich had distanced the party’s long-time members from hubs of power, while preferring the young and new members.

In closed conversations, Eini is much more adamant. Immediately after elections, he was heard saying about Yachimovich, “She just doesn’t have the right stuff. She just doesn’t have it.” Anyone who understands the party’s inner dynamics, understood that Eini was ready to try to replace her. Even today, when the Histadrut chairperson is far from the peak of his political power, he is still considered a considerable power hub in the party.

Eini is charged with ambition to show Yachimovich who really is in control. He was bitterly disappointed in her when he felt that she acted to rein in the power of the Histadrut members in the party; he was disappointed again when — against his opinion — Yachimovich outright rejected Prime Minister Benjamin Netanyahu’s generous offer to serve as finance minister in his government after elections. At the time, Eini told the Labor chairperson that this was an offer she could not refuse, but Yachimovich thought otherwise.

And if that wasn’t enough, Eini recently conducted two strategic reconciliations that are supposed to strengthen his side in the campaign to bring down Yachimovich — with Minister Amir Peretz and with Knesset Member Eitan Cabel. The quarrel between Eini and Peretz is considered to be one of the most severe and emotionally charged feuds known in Israeli politics. While Peretz already left the Labor Party (because of Yachimovich) for the sake of Livni’s HaTenua, under whom he now serves as Minister of Environmental Protection, he is always happy to help bring down the woman he hates so much. In fact, Peretz would be willing to go house to house to recruit supporters for a struggle against her, if necessary.

Knesset member Eitan Cabel made a decent showing when he faced off against Eini for leadership of the Histadrut, in one of the party most emotional struggles. Yet he is likely to become Eini’s ally against Yachimovich in the very near future.

“This is the beginning of the end of Shelly Yachimovich in the party, and it can happen much faster than she imagines,” said a high-placed Labor source to Al-Monitor; the source participated in the stormy party convention last Thursday [April 4]. “In the entire history of this party, there has never been such negative energy against the chairperson, even not in the days of former Defense Minister Ehud Barak.”

At that convention, anger and criticism toward the chairperson erupted all at once in an intensity no one has seen since the days of Barak’s rule. Knesset member Erel Margalit even called on Yachimovich to conduct an open discussion on the subject of the party’s failure in the elections. To the sound of fierce hand-clapping, Margalit rose up against her and cried, “What are you afraid of?” Isaac ‘Buji’ Herzog attacked Yachimovich for distancing large publics in the elections, and Eitan Cabel called her ‘dictatorial.’

Yachimovich is not used to responses such as these. Since she was elected Labor’s leader, she was only pampered at party events. Until recently, every time she arrived with great pomp and entered a hall, she received encouraging cries along the lines of, “Here comes the next prime minister!” This time she looked more like a party head under siege, and not one of the Knesset members came to her defense.

Yachimovich is, of course, not the first Labor head forced to struggle against her dismissal. The curse on the chairperson of the Labor party has long since moved from the realm of folklore to that of the exact sciences. It happens over and over — Ehud Barak in both his terms of office; Amir Peretz; [Binyamin] Fuad Ben Eliezer and [now] HaTnua Knesset member Amram Mitzna — each one, in turn, crossed his political ‘Via Dolorosa’ after elections. But it seems that in the case of Yachimovich, the emotions involved and the desire to settle scores with her, are much more powerful. Yachimovich is a soloist  personality who never really brought any of the party’s senior members into her radar. Deep inside, she even scorned them, mainly the old-timers among them. Yachimovich did not leave room for anyone at her side, and waged the election campaign by herself. She was its star; she tried to prevent other candidates, like Merav Michaeli, from running for a place in the Knesset (in Michaeli’s case, she failed).

Thus, there is no one in the faction who feels uncomfortable in rising up against Yachimovich. On the contrary. The fact is that, she made the Labor party ‘relevant’ at a time when it seemed poised to be wiped off the political map, and increased its strength to 15 mandates as opposed to 13 under Barak. But it has been a long time since anyone gave her credit for that anymore. Yachimovich is now viewed as the one who made every possible mistake before elections and after them too, starting from “hiding” the Labor party’s diplomatic banner and ending with her sweeping refusal to join Netanyahu’s government, without holding a discussion on it in the party’s institutions.

Nevertheless, despite her difficult political situation, Yachimovich shows no signs of breaking. She tries to keep her cool. Thus, for example, when asked last week about the possibility of moving up the primaries, she answered that if it depended on her they would be held soon, “so that we can continue further.”

It seems that her request will be fulfilled very soon.