Knesset member Isaac Herzog, running for Labor Party leadership, claims that the public is looking for a new diplomatic alternative. 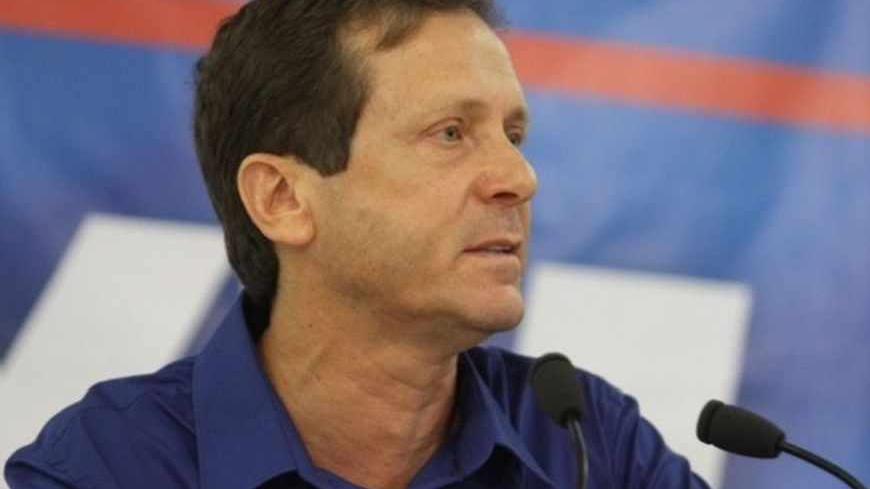 Knesset member Isaac Herzog announces during a news conference at Beit Sokolov in Tel Aviv, Aug. 26, 2013, that he will run against Knesset member Shelly Yachimovitch for leadership of the Labor Party in a primary election scheduled for Nov. 21. - Yael Tzur

Barely 24 hours after announcing at an Aug. 26 news conference that he will run for head of the Labor Party, Knesset member Isaac “Buji” Herzog is already deep into campaign frenzy, with a platform of "True, I am no star, but I am experienced and a team player."

On Nov. 21 of this year, only 10 months after the Knesset elections, the Labor Party will hold primaries for party leadership. Another scene in the party’s famous backstabbing pageant will be enacted for posterity.

This is Herzog’s second contest for party leadership, after Labor leader Shelly Yachimovich’s victory last time around when she led the Labor Party to elections. For this round, Herzog brings with him Knesset Members Eitan Cabel and Erel Margalit — a three-pronged alliance fueled by high motivation to oust Yachimovich from her chairwoman’s seat. There is not much love there, only personal animosity and accumulated grudges toward the chairwoman, who faces a fierce battle for her political life.

In an interview with Al-Monitor, Herzog addresses developments in the region and the Syrian threat and declares that an opposition under his leadership will not allow Prime Minister Benjamin Netanyahu to evade diplomatic negotiation with the Palestinians. In short, everything that he feels Yachimovich is incapable of doing.

Al-Monitor:  What should Israel do in light of the developments in Syria?

Herzog:  We must maintain vigilance and alertness. The truth is that there is nothing much we can do except to continue to provide the humanitarian, medical and other forms of aid that we are already providing. It is clear to me that if Assad tries to embroil Israel in this fight, he understands that he will pay a very steep price. At the moment, the Americans have to consolidate a broad coalition of all the players with the goal of averting additional humanitarian disasters. I mean the NATO countries, Turkey and the Arab League.

In the last two years I have maintained consistent contact with Syrian activists in the opposition, starting from the period when that was still rare. From the very beginning I viewed Syria as a country that could move toward democracy due to its multiculturalism, its religious diversity and its large middle class. I thought then, and I still hold today, that the Western world has squandered a great opportunity here. It was a mistake not to lead an intervention such as the Libyan one.

The result is catastrophe, a shattered country that is a hothouse for Islamic jihad elements that entered the country, and unbelievable chemical-weapon massacres of civilians. The speech of American Secretary of State John Kerry was apt, though unfortunately a bit too late.

Al-Monitor:  Were you in contact with Syrian opposition activists recently as well?

Herzog:  Yes, in recent days I spoke with opposition sources in Syria with whom I maintain contact, and they described a situation to me of an enormous quantity of sarin gas, simply unprecedented.

Al-Monitor:  Will an American intervention in Syria affect the negotiations between Israel and the Palestinians? The United States will be busy in another battlefield.

Herzog:  There is no connection between the diplomatic negotiations and the situation in Syria or a possible American assault. These are two different arenas. The negotiation track takes place separately. The situation in Syria only provides even more justification for promoting the negotiations, and represents a platform for new alliances in the Middle East. The Middle East is undergoing tremendous changes that create fascinating coalitions in front of our very eyes. Within this tsunami, Israel must maintain itself as a bastion of democracy, liberty and stability in the region and, of course, attempt to cooperate with the moderate elements.

Al-Monitor:  Shelly Yachimovich announced that she would grant Netanyahu a diplomatic safety net. Is that approach acceptable to you?

Herzog:  Shelly Yachimovich set conditions for her support of the diplomatic process. She said something like, "We’ll support you if you show us some kind of plan." As opposed to Shelly, I feel it improper to set preconditions. I assume that the sides have not yet reached the moment of truth, and if I reach the conclusion that Benjamin Netanyahu intends to cross the Rubicon, we’ll be there. At the moment I have no reason to commit to any scenario; after all, none of us knows how the negotiations will progress.

When Netanyahu proposed to Yachimovich to join the government after the elections, I thought that first and foremost, she should have set diplomatic parameters before him and not concentrate almost solely on socioeconomic demands. She should have asked him, first of all, whether he is prepared for a peace process based on the 1967 border guidelines. No one clarified the issue with Netanyahu in depth. My impression is that Netanyahu is undergoing some kind of change, but I don’t know how far he is willing to go. That is something we will see in the near future.

Al-Monitor:  You present yourself as a diplomatic alternative to Netanyahu, while claiming that Yachimovich is not interested in this issue. Yet since the elections, Yachimovich has progressed a long way toward diplomatic issues after she understood that she had made a mistake that caused her to lose mandates.

Herzog:  Statements are important and good in and of themselves, but in this case, there is no real substance behind them. My key argument was that the Labor Party became irrelevant in the diplomatic sphere because of the way Yachimovich conducted her election campaign. She turned her back on our natural constituents, and in effect caused the middle class to abandon us. The Labor Party did not provide a diplomatic alternative to a tremendous public that wanted to hear an alternative vision to the one presented by the right.

I deal constantly in the diplomatic sphere and maintain connections with many leaders in the world; I am known in the international media and in prestigious global forums. I have the tools to be an effective opposition head vis-à-vis Netanyahu and the right in the diplomatic sphere. What is happening now is that the opposition headed by Yachimovich does not represent a serious diplomatic alternative, because there is no real content behind her. That is aberrant.

Al-Monitor:  Perhaps she should be given another chance to prove that she can raise the diplomatic banner instead of being pulled into another internecine party struggle?

You have to understand that the Labor Party’s natural constituency has long desired to see the diplomatic banner raised next to the social-justice banner. Yachimovich, as opposition chairwoman, has not presented a detailed diplomatic program. I will do this. We have no overall regional vision about what is taking place in the Middle East. I respect her contribution in the social-justice arena, where she really did succeed in changing the party’s image. The problem is that we have become an oppositional party, a type of social-justice protest movement, a niche party. We are a ruling party and need to return to that place, to be an address for disillusioned Lapid backers.

Al-Monitor:  If we admit to the truth, we know that all this stems from the bad blood between senior Labor Party members and Yachimovich. You, Cabel and Margalit simply want to remove her. It is really hard to work with her?

Herzog:  I am known as a team player. I have no desire to express an opinion about Yachimovich in this context. My colleagues have already said enough about her. My objective is to unify the party as quickly as possible and transform it into an effective opposition. The opposition under me will be different. I will not allow Netanyahu to enfeeble the diplomatic process by winking at the right. I have no intention of making things easier for him, because this is not a good government. I will do everything in order to present a real diplomatic alternative.