Israel's prime minister will need to get busy in the peace process or present an alternative plan of his own. 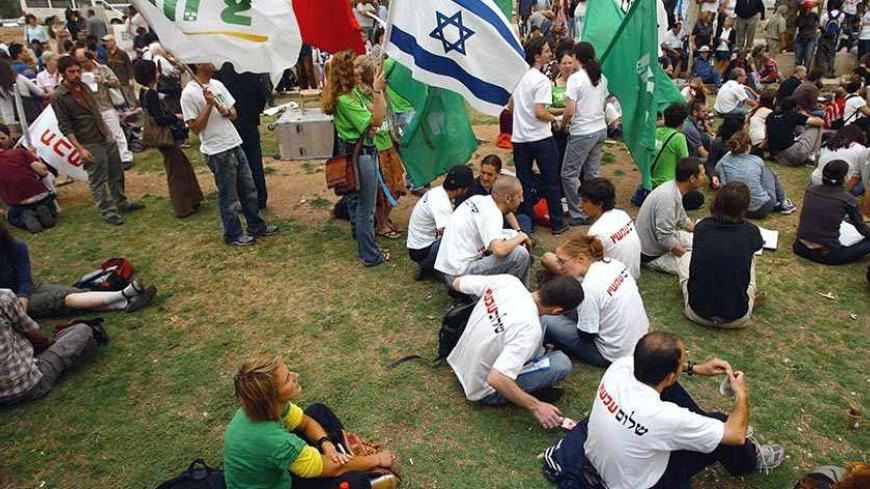 Israeli leftist peace activists attend a rally calling for a two-state solution to the Mideast conflict outside Jerusalem's Old City, May 11, 2007. - REUTERS/Ammar Awad

In October 2003, while the second intifada was raging, the Israeli media uncovered a diplomatic initiative that sent the country’s political system into turmoil. The scope of the public debate surrounding it surprised even its architects on the Israeli side: former minister Yossi Beilin and former chairman of the Israel Labor Party Amram Mitzna.

The right-wing prime minister of the time, Ariel Sharon, was then at the height of his political power, leading a party holding 38 seats. Yet even he found himself challenged by the virtual peace agreement signed in Geneva between Beilin, who was then the chairman of the small opposition Meretz Party, and the Palestinian adviser and politician Yasser Abed Rabbo, who held no official position. Sharon came out against those forces on the left who acted behind the government’s back and collaborated with forces he claimed were hostile to the State of Israel. He tried, to no avail, to delegitimize what has come to be known as the Geneva Initiative and the people behind it.

While the second intifada continued, Sharon experienced a drop in the public opinion polls, while at the same time his efforts to create a diplomatic agenda failed. The Geneva Initiative rolled into the ensuing vacuum like a tempest, receiving the backing of leaders of the free world, among them US President Bill Clinton and British Prime Minister Tony Blair. For many long months, the initiative refused to disappear from the headlines. Ultimately, it was one of the factors that motivated Sharon to announce the disengagement from Gaza a few months later. By then he had realized that he had lost all relevancy in the diplomatic discourse.

A decade later, that virtual peace initiative continues to set a meaningful agenda and to evoke political and public debates. That was its great achievement. It continues to preserve the relevance of Israel’s diplomatic left, which suffered a harsh blow after the failure of the Camp David talks in 2000 and the eruption of the second intifada immediately after that.

Like Sharon before him, Prime Minister Benjamin Netanyahu is close to the point where he will lose all relevance in the diplomatic arena. Israel is now in the midst of one of the greatest periods of isolation it has ever known, and Netanyahu has been forced into participating in a vague and uncertain diplomatic process. Worst of all as far as he is concerned is the waning of the Iranian issue since the signing of an interim agreement between Tehran and world powers.

Putting the negotiations between Israel and the Palestinians into motion provided Netanyahu with some quiet, but only for a limited time. On the other hand, conflicting reports about what is happening in the inner chambers are hardly encouraging and add a large question mark to US Secretary of State John Kerry’s remarks Dec. 6 about the progress of the talks. Furthermore, Avigdor Liberman — foreign minister of Israel, number two in the ruling party and the person who holds the keys to the integrity of the coalition — was loud and clear when he told the world on Dec. 6 that the task of reaching an agreement is impossible at the current time.

Even if Liberman, who said this from the podium of the Saban Forum in Washington, was just speaking his own mind, without coordinating what he would say with Netanyahu, the political significance of his remarks is clear. The prime minister does not have the support of the key person needed to advance the negotiations. In other words, the talks have no political future.

At the same time, just as Sharon could not ignore the Geneva Initiative ten years ago, Liberman and Netanyahu are not acting in a vacuum either. Even then, the virtual agreement offered clear-cut proof that the diplomatic process between Israel and the Palestinians has enormous implications in the international arena and that a large part of the Israeli public is still interested in a permanent arrangement with the Palestinians based on a partition of the land.

The citizens of Israel have gone through a lot since then. Sharon has long exited the stage, but his heirs in the Kadima Party — former prime minister Ehud Olmert and former foreign minister Tzipi Livni — failed to achieve an agreement and finally, in 2009, they lost the reins of government to the Likud Party. Ever since that election, which brought Netanyahu back to the prime minister’s office, the Palestinian issue has completely vanished from the agenda, replaced with the struggle against Iran’s nuclear program.

Now that the world is losing interest in the Iranian nuclear program issue, the level of interest in the negotiations with the Palestinians is rising. Israelis are also paying close attention to warnings by the former head of Shin Bet Yuval Diskin, who described the negotiations with the Palestinians as an existential issue for Israel while attacking Netanyahu’s coalition and describing the prime minister as a weak leader on Dec. 4. To prevent serious discussion about Diskin’s claims, Netanyahu chose to disparage his person instead.

In some way, it is reminiscent of how Sharon tried to delegitimize Beilin right after the Geneva Initiative was revealed in 2003. It did not work then. Three years into the second intifada, the Israeli public was looking for a more hopeful future. It will not work now. Diskin gave a speech last week at an event to mark the tenth anniversary of the Geneva Initiative, in front of a hall full of the initiative’s supporters, while Meretz, the sponsor of the event, has soared in the polls, which suggests it could hold 12 seats.

The January 2013 elections proved that the center-left bloc, which supports a diplomatic resolution based on the concept of a two-state solution, has the same political power as the right-wing bloc, which also has supporters of such a solution within the prime minister’s own party. The current coalition has at least 25 seats in Yair Lapid and Tzipi Livni’s parties [Yesh Atid and HaTenua, respectively], who are committed to the diplomatic process. The election of Isaac Herzog as chairman of the Labor Party, instead of Shelly Yachimovich, also fits well with that trend.

At the same time, there is significant activity outside of the political system to topple Netanyahu. The two people leading this effort, Olmert and former minister Moshe Kahlon, are currently working independently, but they could combine forces in the future. As far as anyone knows, Diskin has no political ambitions of his own, but he would be glad to throw his support behind any group organizing to serve as a counterweight to the prime minister.

Netanyahu is closer than ever to the moment where he will have to decide for himself. Without the Iranian nuclear issue, he will have to be more active in the current diplomatic process, or he will have to present an alternative plan of his own. Otherwise, the vacuum will be inundated with other diplomatic initiatives and political forces.