Israeli group looks to bring peace back into agenda

Amid Israeli hopelessness and indifference toward the conflict with the Palestinians, the Geneva Initiative convened a conference on restoring a dialogue on the two-state solution. 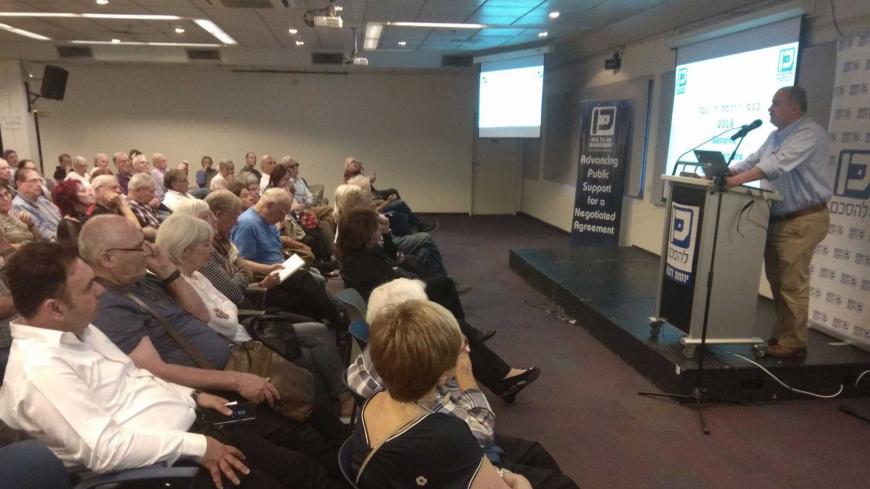 On the afternoon of May 10, some 150 people gathered for “Palestinian-Israel Dialogue” in the conference hall of the Eretz Israel Museum in Tel Aviv. For the most part, the conference participants identified with the hard core of the Israeli left, including Meretz members and supporters of the Geneva Initiative, which organized the event. They had come to talk about the Israeli-Palestinian peace process in the wake of the decision to open the US Embassy in Jerusalem on May 14 and the deterioration of the security situation in Gaza. The participants paid rapt attention to Elias Zananiri, the deputy chair of the Palestinian Committee for Interaction with the Israeli Society, Meretz Chair Tamar Zandberg and former party chairman Yossi Beilin, one of the architects of the Geneva Initiative. Listening to them, they were filled with hope.

Anyone watching from the sidelines might think that this limited gathering was detached from all reality. Israeli fighter jets had attacked Iranian targets in Syria one night before, and Israelis living in the Golan Heights were waiting nervously for the response. Prime Minister Benjamin Netanyahu and the right were soaring in the polls to unprecedented new levels, yet the organizers of the event insisted on remaining loyal to their vision of a two-state solution. They refused to abandon all hope.

Given the general mood in Israel, no one was surprised that Israeli media barely covered the event. It was certainly not on the public’s agenda. The organizers probably recognized this, given the emerging conflict with Iran and the concurrent tendency of Israelis to ignore the Palestinian-Israeli conflict almost entirely. Over the last two weeks, Israelis proved that it is easier to get them to take to the streets in response to an international sporting event, that is, the Giro d’Italia bike race, or the Eurovision song contest, after which thousands emerged at 2 a.m. to celebrate Israel’s victory. It is, of course, an important sign of Israelis living a normal existence. At the same time, however, it is worrying to think that most Israelis remain apathetic toward the conflict with the Palestinians, which directly affects the future of their country as a Jewish and democratic state.

This is the most challenging time for Israel’s political left since Netanyahu returned to power almost a decade ago. The two-state solution, adopted by Netanyahu in his 2009 Bar Ilan speech, has disappeared from the agenda of his fourth government, while US President Donald Trump avoids dealing with the issue at all. Furthermore, Netanyahu and the right are constantly being showered with gifts by the Trump administration, even though each gift, including moving the embassy and the US withdrawal from the Iran nuclear agreement, comes with a steep strategic cost. On the other hand, for now at least, the ultimate deal between Israel and the Palestinians that Trump promised is nowhere to be seen on the horizon.

Then there are the two major center-left parties, Yesh Atid and the Zionist Camp, which are being dragged along after Netanyahu’s Iran doctrine and are unable to offer a political or defense alternative to Netanyahu’s right-wing government. The May 10 meeting revolved around what the core issue and political banner of the camp opposed to the right should be — i.e., separation from the Palestinians. Now of all times — there are signs that Hamas is interested in a hudna, a long-term cease-fire, with Israel, and Gaza is about to explode — there should be an attempt to rekindle a discussion in Israel about reaching some kind of arrangement with the Palestinians.

That is why Meretz and the Geneva Initiative are so vital, especially in this political and diplomatic climate. That Zananiri visited Tel Aviv on what was one of the toughest days for the Palestinians, just hours before the US Embassy relocated, should indicate that there are people on both sides who are keeping the embers of hope glowing and who believe that change is possible.

Speaking in Hebrew, Zananiri said, “The Palestinian leadership adopted the Saudi peace initiative and the Geneva Initiative. The Israeli government said nothing at the time, then later said that there is no partner for peace. The whole world recognizes a Palestinian state alongside Israel, within the 1967 borders. As long as there are Israelis and Palestinians who realize that the only way to live in peace is the partition of the country, there is a chance.”

Zandberg spoke about reports of the proposed hudna, which have been ignored by the Israeli government. She remarked, “If we have a chance, any chance, to avoid bloodshed next week, we are obliged to take it.”

When looking at the history of the Geneva Initiative since it appeared in December 2003, it becomes quite clear how removed Israel is from a two-state solution. The beginning was overwhelming. At the height of the second intifada (2000-2005), with hundreds of Israelis killed in bombings in the heart of the country’s major cities, Israelis and Palestinians put together an outline for a permanent solution to the conflict. The people behind it weren’t marginal figures either. Israel was represented in the secret talks by the chairman of Meretz, Beilin, and the chairman of the Labor Party, Amram Mitzna, while the Palestinians were represented by Yasser Abed Rabbo.

The agreement became a political and diplomatic sensation and an annoyance to Prime Minister Ariel Sharon, who was also chairman of the Likud. At first, he tried to accuse the left of working behind the government’s back and cooperating with forces hostile to the state, but this attempt to delegitimize the agreement failed. Over time, the people around him claimed that by resetting the agenda, the Geneva Initiative made it clear to him that the public really does long for a diplomatic process. This was, many claim, one of the factors that led to the plan for Israel to withdraw from Gaza, which Sharon presented soon afterward.

Almost 15 years later, the Geneva Initiative still survives, under much more difficult circumstances. Yet the very fact that it survives is worthy of respect. It is especially important, when Israel’s center left, which should be raising it as a banner issue, refuses to do so clearly and confidently. In that sense, Meretz also has a major role as a left-wing Zionist party in advancing this agenda. Its stubborn adherence to the peace process and a two-state solution is worthy of admiration.

At the same time, Zandberg, as the new chair of Meretz, should be aware that her decision to boycott the ceremony marking the transfer of the US Embassy alienates her from large swathes of the left, who identify with this historic move. Her protest diverts the discussion from the need to move ahead with a solution to resolve the Palestinian-Israeli conflict and seems more like a gimmick intended to grab headlines. That’s too bad, especially now, when Meretz's clear voice is so vital to the left and to the country overall.