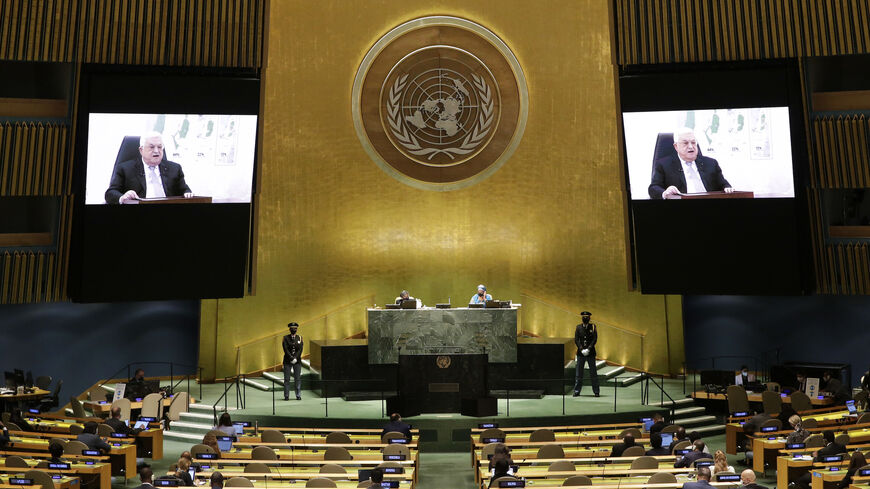 Palestinian President Mahmoud Abbas is expected to play host to two Israeli ministers, both of them members of leftist Meretz. By accepting this invitation, Meretz chair and Health Minister Nitzan Horowitz and Minister for Regional Cooperation Issawi Freij have given Prime Minister Naftali Bennett’s office reason to feel uneasy.

On Sept. 27, Bennett gave his first speech to the United Nations. He made no mention of the Palestinian-Israel conflict, focusing instead on the fight against the pandemic and Iran.

It a was jarring omission. Just a few days earlier, Abbas commented on Israel’s new government in his prerecorded remarks to the UN General Assembly. His speech contained an ultimatum, giving Israel one year to end the occupation. The demand came off like a desperate attempt to end years of diplomatic deadlock.

“This is a moment of truth,” Abbas warned, adding that the region is at “a crossroads.” He went on to accuse Bennett's coalition government of avoiding reaching an agreement and offering empty economic and security plans.

On Sept. 13, Foreign Minister Yair Lapid proposed his "economy for security" Gaza rehabilitation plan. Lapid explained that conditions are not right for any real diplomatic progress with the Palestinians, other paths should be investigated. He claimed that his plan would strengthen the Palestinian Authority at the expense of Hamas.

Meretz wasn’t happy about the way Bennett ignored Abbas’ distress signal and tweeted a scathing rebuttal to the prime minister’s speech: “In Meretz, we are actually quite interested in the Palestinians. We will continue to act within the government and outside it to advance a two-state solution and rehabilitate Israel’s ties with the Palestinian Authority. Ignoring the Palestinians means the continuation of creeping annexation and the rush to a binational state.”

A few days later Horowitz and Freij confirmed that they had accepted Abbas’ invitation to meet in Ramallah.

When Defense Minister Benny Gantz met with Abbas just a few weeks ago, he needed the approval of the prime minister. But the Meretz ministers, who are not discussing security cooperation, are free to engage in political dialogue. When asked whether Bennett even knew about his planned meeting with Abbas, Freij responded, “We are part of a government that agreed to not to agree. We did not agree not to meet.”

Another Meretz cabinet member, Minister of Environmental Protection Tamar Zandberg, also told Army Radio in an interview that her party has no plans to abandon its ideology. When asked about Bennett ignoring the Palestinians in his speech, she said, “The issue isn’t the speech but the reality … and the reality hasn’t disappeared just because of a decision to shut our eyes to it. That is the position of Meretz, and it corresponds with reality. This land must be divided between two peoples. It would be right for the State of Israel to move forward to a better future through the partition of the land through negotiations.”

The situation greatly weakens Bennett, who cannot force Meretz to lower the political banner it has held for decades. The party will remain deeply committed to the idea of ending the occupation and instating a two-state solution.

Abbas and the Meretz leadership have had a close relationship for years. When they were in the opposition together during Netanyahu’s long diplomatic deadlock, Meretz leaders met occasionally with Abbas in Ramallah.

Calls are quietly growing within Meretz to reinvigorate the Palestinian channel of the peace talks, based on the assumption that with Bennett being as weak as he is, the party can act with considerable freedom. The planned visit to Ramallah by Horowitz and Freij should be seen through that lens.

Meanwhile, Bennett has kept silent. His office did not react to news of the meeting in Ramallah. But there is tension beneath the surface as Bennett keeps a careful eye on the few supporters he still has on the right. He opposed the two-state solution for years and waged a delegitimization campaign against Abbas. If he allows Meretz to move ahead with some version of a two-state solution, he will lose whatever is left of his base.

Abbas knows a thing or two about Israeli politics. He has identified Bennett’s Achilles’ heel and bypassed him to arrange a meeting with two of his ministers. Right now, the government can probably survive the meeting taking place. The question is what will happen when the coalition’s left flank starts introducing diplomatic initiatives of its own.

When the new government was first formed, its members made it clear that they would not take up controversial issues like the Palestinian question. In practice, however, it is impossible to avoid them entirely. Bennett wants to not only continue the deadlock initiated by former Prime Minister Benjamin Netanyahu but shore it up.

On the other hand, the left flank of his government is starting to lay the groundwork for dialogue with Abbas. It is now believed that soon after the ministers from Meretz have their meeting in Ramallah, ministers from the Labor Party will make their way there too. Then there is Foreign Minister and Alternate Prime Minister Yair Lapid and his plan to rebuild Gaza.

Right now, the government seems to have no official policy or plan regarding the Palestinians and its members are all pulling in their own directions.