The Abraham Accords did much to sideline the Palestinian issue, but the current Israeli government is increasingly communicating with the Palestinian Authority and President Mahmoud Abbas. 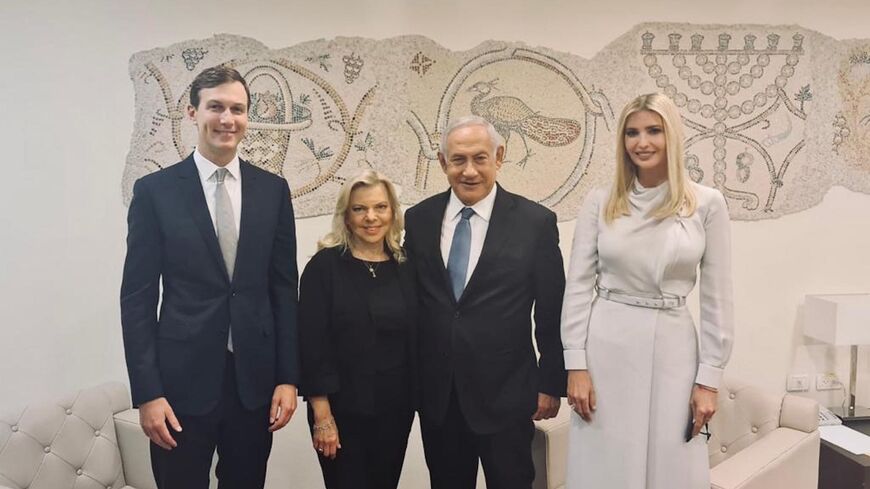 When former Prime Minister Benjamin Netanyahu traveled to the White House to sign the Abraham Accords last year, it seemed for a moment as if he and President Donald Trump had broken the Palestinian veto on the peace process. Israelis started flying to Dubai and a spirit of reconciliation appeared to be infecting the region.

Even Netanyahu’s biggest rivals and opponents were forced to congratulate him for what was, by all accounts, a surprising historic breakthrough. Four peace agreements and the normalization of relations with four pragmatic Arab states proved Netanyahu’s claim that it was possible to make peace without the Palestinians. The Abraham Accords were a devastating blow to the Israeli left after half a century of advocating for an end to the occupation and partition of “the land between the river and the sea” into two independent states.

The accords also dealt a heavy blow to Palestinian President Mahmoud Abbas, whom at least some of the Arab states had abandoned. In a burst of anger, he accused the United Arab Emirates of betraying the Palestinian people. He came off as a leader whose relevance was fading.

Less than a year has passed and the mood has already changed. Last August, Defense Minister Benny Gantz of the Blue and White Party went to Ramallah and met with Abbas. And on Oct. 3, Abbas met with a delegation of Israeli ministers from Meretz, which is now part of the ruling coalition, pushing for a return to the negotiating table with Israel.

Circumstances have changed, too. Netanyahu is no longer in power. He has been sent to the opposition, while a Democratic administration in the White House has restored the two-state solution to its agenda.

Even if Prime Minister Naftali Bennett is opposed to reviving the Palestinian channel for peace talks, he has apparently little control over it. Bennett came into the coalition with only six Knesset seats. His political weakness makes it impossible for him to prevent left-leaning ministers in his government from going to Ramallah to promote peace initiatives of their own. After all, as a result of the rotation agreement, Foreign Minister Yair Lapid is expected to enter the prime minister’s office in less than two years and once he does, the pursuit of a two-state solution could become Israel’s official policy.

Lapid delivered a speech Oct. 11 to mark the launch of a new Knesset caucus to advance the Abraham Accords. While Lapid congratulated Netanyahu on his role in bringing about the peace agreements and promised to move forward with them, he emphasized the importance of achieving peace with the Palestinians, too. “The current government not only embraced the Abraham Accords, it took them to the next level. In just four months, it has succeeded in nurturing warmer relationships with Egypt and Jordan and strengthened our ties with the United States.” He said that he is taking this opportunity “to tell the Palestinians and any other Arab nation that is listening that we seek peace.”

In the audience were guests of honor former White House adviser Jared Kushner and his wife Ivanka Trump and Moroccan ambassador to Israel Abderrahim Beyyoudh. Netanyahu, now as the leader of the opposition, also attended with his wife Sara. He received an effusive welcome.

Despite this warm welcome, Netanyahu is no longer in charge and the national agenda has shifted rapidly since he left office.

Meretz leader and Health Minister Nitzan Horowitz said during his visit to Abbas in Ramallah, “Meretz has a mission in the government: to keep the two-state solution alive. We won’t let it disappear and we won’t let anyone sabotage the chances of achieving it in the future because there isn’t any other solution.”

All the other Meretz ministers also regularly repeat this message. In the Labor Party, this sentiment is starting to resurface. Just last week, a group of prominent Labor activists led by Labor leader Eran Hermoni received a warm welcome in the Mukataa in Ramallah.

Hermoni reported back to his party, “We met with Palestinian leaders, including ministers, advisers to Palestinian President Abbas, and other senior officials from the Palestinian Authority and Fatah. Our delegation's goal was to engage them in dialogue and foster a closer relationship between the political and social leaders on both sides.”

There are also those who doubt that it is in Israel’s interest to revive the idea of a two-state solution. Led by Netanyahu, this faction cites the success of the Abraham Accords as proof of his approach’s viability. As he tends to do, Netanyahu makes use of sophisticated rhetorical tools to distinguish him and his party from the current government, even though it is led by a figure from the right. In his speech yesterday, he said that the normalization agreements broke the Palestinian veto. He went on, “The persistent refusal of the Palestinian leadership to recognize a Jewish state is a root cause of the Palestinian problem.”

Netanyahu was scornful and blunt in another belligerent speech he gave two hours later, saying, “We proved that peace with Arab states does not go through Ramallah. It bypasses Ramallah.” He added, “Unlike you, we not only talked about peace; we made peace. We extricated Israel from its dependence on the Mukataa, while you keep running back to the Mukataa.”

Netanyahu now has one political mission: to destabilize the new government by marring the credentials of its furthest-right members, like Justice Minister Gideon Saar and especially Prime Minister Naftali Bennett. He presents them as collaborating with leftist policies even though a return to negotiations with the Palestinians on a two-state solution will lead to the resumption of terrorism. Then in the same breath, he uses the Abraham Accords to prove that his way is right and that there is no need for Israel to achieve peace with the Palestinians.

It is hard to argue with this idea. The one group that stands to benefit from Netanyahu’s efforts is Israel’s political left, which is becoming relevant again and has a loyal base of support. The person who stands to lose the most to Netanyahu’s rhetoric is Bennett. By failing to create a right-wing political agenda of his own, he is actually providing a tailwind to the two-state solution.