Is two-state solution back on Israel’s agenda?

Israel’s leadership must understand that as far as the Biden administration is concerned the two-state solution is back on the agenda. 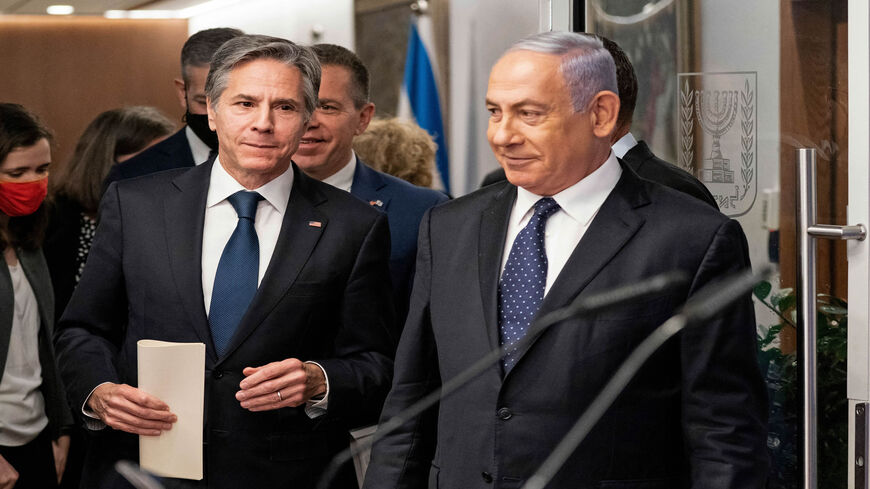 Israeli Prime Minister Benjamin Netanyahu (R) and US Secretary of State Antony Blinken arrive for a joint press conference, days after an Egypt-brokered truce halted fighting between the Jewish state and Hamas in the Gaza Strip, Jerusalem, May 25, 2021. - Alex Brandon/POOL/AFP via Getty Images

The meeting between Israeli Prime Minister Benjamin Netanyahu and US Secretary of State Antony Blinken in Jerusalem May 25 offered insight into the enormous changes taking place in the region, ever since President Donald Trump left office.

On the one hand, it was a very good meeting. Blinken made every effort to showcase the close friendship between the two countries, with an emphasis on President Joe Biden’s longstanding commitment to Israel’s right to defend itself against a terrorist organization firing rockets on its citizens. This was more than just rhetoric, too. Over the last two weeks, during Operation Guardian of the Walls, Biden’s actions proved that he stood with Israel. He maintained regular and cordial contacts with Netanyahu, while his calls for a cease-fire were made quietly, with calculated diplomatic tact. Biden made a point of respecting Netanyahu. The White House made no threats, nor did it bully him, as happened on more than one occasion during the Obama administration.

On the other hand, despite all the elegant diplomacy, the last two weeks show that there have been enormous changes to American attitudes toward Israel, particularly when it comes to Israel’s relationship with the Palestinians.

What Biden effectively did was return negotiations with the Palestinians — with the goal of achieving a two-state solution — back to center stage, after they were frozen indefinitely in 2014. This happened when Biden felt forced to intervene as a result of the recent conflict in Gaza. What made his new policy notable was that it consisted of more than just rhetorical flourishes. It had a number of operative components, too.

The most obvious and immediate example of this is the Biden administration’s decision to reopen the US Consulate in East Jerusalem, which was shut down by the Trump administration. Blinken informed Netanyahu of this decision during their meeting, and reiterated the new policy during his meeting with Palestinian President Mahmoud Abbas in Ramallah.

This is, of course, much more than some symbolic act. Over the last three decades, the consulate served as the United States’ diplomatic representation to the Palestinian Authority (PA). It was shut down in October 2018, when Trump moved the US Embassy in Israel from Tel Aviv to Jerusalem. It was decided at the time to merge the two diplomatic offices in Jerusalem. What this meant in practical terms was that the consulate, which was once responsible for all contact with the PA, was subordinated to the ambassador to Israel. In other words, it lost its independent status.

The decision to shut down the consulate was a highlight of the unusually warm relationship between Trump and Netanyahu. Inevitably, it led to any efforts to achieve a two-state solution being removed from the agenda. The Palestinians considered this an act of belligerence and part of a larger policy that showed preference to Israeli interests over any national aspirations they had.

That is why the reopening of the consulate is considered to be an important step forward in the effort to renew the relationship between the United States and the Palestinians. It was a conciliatory gesture to Abbas, who had been subjected to a chilly and sometimes hostile attitude from Trump.

And Blinken had even more surprises for the Palestinians. He informed both Netanyahu and Abbas that the United States plans to send $75 million to Gaza in 2021 to help rebuild the enclave after the current round of violence.

There is no doubt that in his first official visit to Israel and the Middle East, Blinken presented a new American policy toward the region, which differed markedly from that of the previous administration. Reflecting back on the summer of 2020, when the Abraham Accords began to emerge, shows how serious this change is. Trump eliminated two key factors that President Barack Obama tried to advance: a nuclear deal with Iran, from which the United States withdrew, and talks between Israel and the Palestinians, which were taken off the table. Both of these are, once again, prominent points on the American agenda, even if the style used to advance them is different.

It looked like Blinken wanted to address the Israeli people directly. He knew that they were enamored with Trump, and this was his chance to introduce them to the new Biden agenda. On the one hand, he wanted to highlight the absolute nature of the US commitment to Israeli interests, while at the same time, he wanted to breathe new life into the two-state solution to the conflict.

Before leaving Israel for Egypt and Jordan, Blinken gave an exclusive primetime interview to Israel’s main news broadcast on Channel 12. When asked if there would be an attempt to revive the Israeli-Palestinian peace process, he responded, “We continue to believe very strongly that a two-state solution is not just the best way, but probably the only way to really assure that going forward Israel has a future as a secure Jewish and democratic state, and the Palestinians have a state to which they’re entitled. So I think we want to get to that. But right now, the focus is on dealing with the aftermath, the recent violence, trying to build on the cease-fire, address the immediate needs and concerns, and then see if over time the conditions are such that there’s a better environment for trying to pursue a two-state solution."

Israelis had gotten used to being the beneficiaries of Trump's generous gifts. He moved the embassy to Jerusalem, recognized Israel’s annexation of the Golan Heights and fostered peace treaties with moderate Arab states. Now, Israelis are beginning to realize that something new and different was happening.

At the same time, however, they also recognize that Biden is unlike Obama, who was considered by many Israelis to be decidedly pro-Palestinian. Biden succeeds in presenting himself as someone who really understands the mood in Israel, and who loves Israel dearly.

So far, Netanyahu, an experienced politician, managed to get through this baptism by fire unscathed. In contrast to his heated dealings with Obama, Netanyahu had no public disputes for the moment with Biden.

All these changes coming from Washington catch Israel in a state of political instability. It is very possible that Netanyahu’s long term in office will soon end. Now that a new coalition made up of parties from the left and the right is on the table yet again, the question being raised is what policies it will adopt in dealing with the Palestinians.

The prime minister of this new government would probably be Yamina party Chairman Naftali Bennett, who advocates the annexation of Israeli West Bank settlements, while the alternative prime minister, Yair Lapid, supports a two-state solution. Furthermore, the left-wing parties, headed by Meretz, consider the settlements to be a symbol of the Israeli occupation, with all the corruption this engenders. Meretz party Chairman Nitzan Horowitz came under attack from the right last March, when he expressed support for the International Criminal Court in The Hague, which announced that it was investigating Israel for war crimes. On May 27, Horowitz said in a radio interview that he supports renewing negotiations between Israel and the Palestinians.

The significance of this is that if a new government of change is, in fact, formed, there would be no consensus on how it will handle the Palestinian-Israeli conflict. The situation in the Gaza Strip was relatively quiet when the parties agreed to form such a government with the express purpose of removing Netanyahu from office. It therefore had the leeway to claim that it would avoid the Palestinian question and focus on other civil and military issues. The last two weeks have restored the security situation to the top of the national agenda and returned the possibility of a two-state solution to center stage.