Now that Joe Biden has been elected as the next president of the United States, Israel’s political left feels revived. 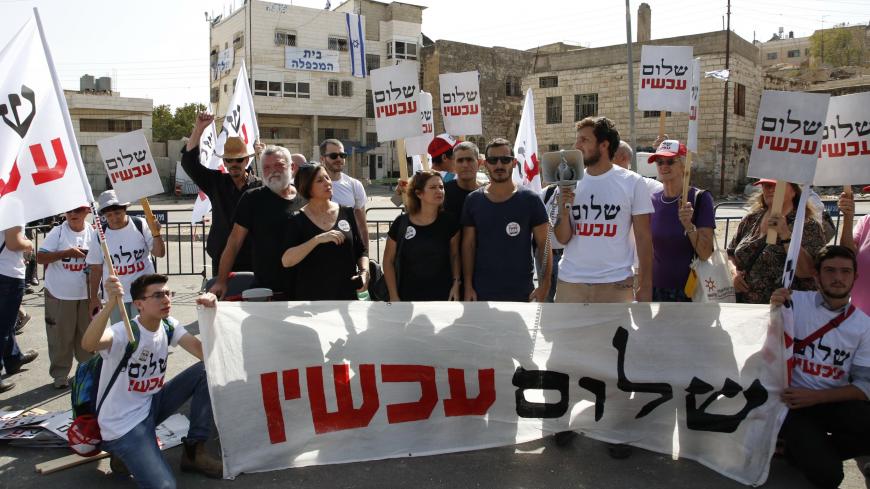 Israeli left-wing demonstrators hold banners in front of a Palestinian house occupied by Israeli settlers in the center of the divided city of Hebron during a protest called by Peace Now to denounce settlements in the Israeli-occupied West Bank, on Oct. 20, 2017. - HAZEM BADER/AFP via Getty Images

“Congratulations, America! Congratulations, Joe Biden! And congratulations, Israel too! America chose Joe Biden, a true friend of Israel and a supporter of the two-state solution. The age of belligerence, messianism, and fantasies of annexation is over. It’s time to put an end to the frenzy of construction in the settlements and return to the negotiating table until we have peace here!” That was the response of Peace Now, right after the major US networks announced that Biden had been elected to be the next president of the United States.

Sharing in this outpouring of joy over the defeat of President Donald Trump were all the leaders of the Israeli political left, former and current politicians alike. But there was good reason that Peace Now’s response was the quickest in coming and the most effusive. As far as the movement’s supporters were concerned, it marked the end of the four-year nightmare in which Trump was in the White House. As president, he made them irrelevant, while supporting and strengthening the West Bank settlement movement and the Israeli right.

Peace Now is the oldest movement on Israel’s political left. It is also the best known, both at home and internationally. It was first founded over 40 years ago to gain public support for a withdrawal from the West Bank. Over the years, some of its leaders and founders became major political figures on the Israeli left. Their successful campaigns to halt construction in the settlements received extensive international media coverage.

During Trump’s four years in the White House, however, Peace Now and the entire Israeli left found themselves pushed to the margins. They lost any influence they had on the national agenda. In terms of messaging, this was an awful period for them, impacting even their ability to raise donations. They were hurt by just about everything that Trump did for which the settlers were grateful. This included deep diplomatic deadlock, a failure to communicate between Washington and the Palestinian Authority, and symbolic moves such as the relocation of the US Embassy to Jerusalem.

In August and September, when they learned that Prime Minister Benjamin Netanyahu and his friend Trump were able to reach normalization agreements with Arab Gulf States, the blow to the left seemed lethal. The paradigm that members of the left had been preaching for decades — that only after peace is reached with the Palestinians would Israel be able to sign agreements with the other Arab states — suddenly seemed to collapse. Peace Now struggled to contend with the changes, which seemed to play into the hands of the right.

That is why Biden’s election turned everything around. The US Embassy will not be returned to Tel Aviv, but the political agenda will change. Biden and Vice President Kamala Harris bring the two-state solution back to the table, and provide support for a battered and humiliated Israeli left, which has been losing more and more electoral support over the last few years.

Knesset member Nitzan Horowitz, chairman of the left-wing Meretz party, issued a public call on Facebook to the president-elect’s Middle East team “to renew efforts to advance the peace process between Israel and the Palestinians, which is a clear Israeli interest.”

Even in the centrist Blue and White party, there were those who saw this as an opportunity to relaunch negotiations with the Palestinians, headed by Palestinian President Mahmoud Abbas. And this doesn’t even take into account opposition leader Yair Lapid’s effusive congratulations to Biden.

Israelis consider Biden to be someone involved and intimately familiar with the history of political negotiations with the Palestinian Authority. He has criticized Netanyahu’s handling of the Palestinian issue on more than one occasion. He was also a close partner in President Barack Obama’s failed efforts to reach a political agreement, and it is now thought that he will try to resuscitate these efforts. Harris is no less committed to that cause. During the campaign, she said the United States would reopen a consulate (for Palestinians) in East Jerusalem and restore economic aid to the Palestinians.

Former Prime Minister Ehud Barak said in Maariv that Biden believes it would be better for Israel to separate from the Palestinians and become a nation with a firm and secure border and with a solid Jewish majority for generations to come.

Former Cabinet minister Yossi Beilin, one of the Israeli political left’s most prominent voices, said in an article in Israel Hayom that Israel and the Palestinians will return to the negotiating table. “The Trump plan is the plan of the Israeli right. It does not take Palestinian interests into consideration. The lack of communications between the Trump administration and the Palestinian leadership is the explanation or the cause for the plan itself, which had no chance of being embraced by the Palestinians. All the most problematic decisions now become a big opportunity for the Biden administration. He can try to get the sides to meet, and he can encourage them to engage once again in serious negotiations,” he said.

Another major event that coincided with the Biden election was the death Nov. 10 of senior Palestinian senior official Saeb Erekat. He was a key figure in negotiations in the peace talks, including during Obama’s final years in the White House. Erekat's death from the coronavirus in a Jerusalem hospital became the source of a vociferous argument between the Israeli right and left.

Former Foreign Minister Tzipi Livni, who negotiated with Erekat in 2014 on behalf of Netanyahu, tweeted in his memory, “I negotiated with Saeb Erekat for hundreds of hours. We represented two different sides, and we had serious differences, but we shared the same objective: We wanted to reach an agreement that would put an end to the conflict between our two peoples. And no, not all Palestinians are terrorists. Anyone who brands them all as such prevents us from speaking with the moderates among them in order to reach some future agreement.”

Livni came under harsh attack from the right on social networks. Nevertheless, it still seemed that with a man who is expected to reinvigorate negotiations with the Palestinians being elected to the highest office in the United States, the left has begun to raise its head again, after such a long time away. The signs from Ramallah also seem encouraging, with Abbas announcing that he plans to revive security coordination with Israel in response to the US election.

In this festive mood, even the announcement of US Secretary of State Mike Pompeo’s planned visit next week to the West Bank and Golan Heights, apparently with Prime Minister Netanyahu, was not enough to weigh down on members of the left. They see this as the final death throes of the Trump era, and they believe that this could signal the long-awaited opening for a change of government in Israel as well.