Even with Biden, talks with Palestinians not on Israel’s agenda

Despite the election of Joe Biden, no one in Israel is keen to rush to the negotiating table with the Palestinians. 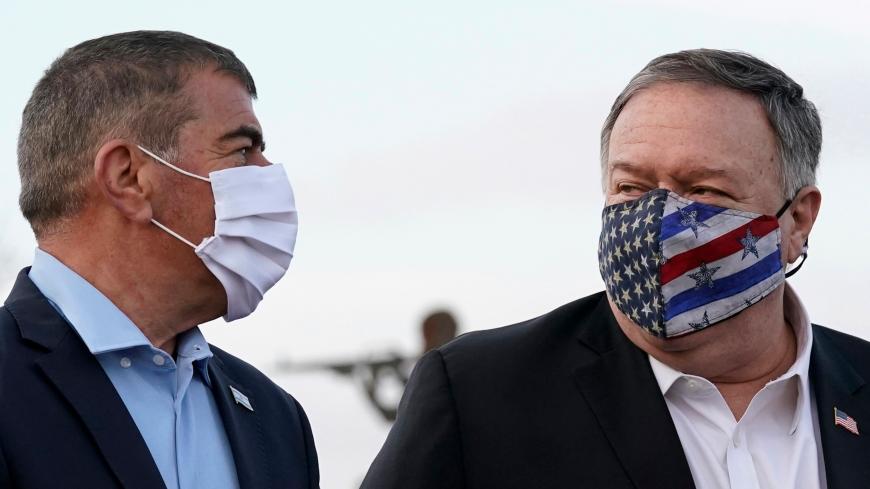 Israeli Foreign Minister Gabi Ashkenazi (L) walks with US Secretary of State Mike Pompeo following a security briefing on Mount Bental in the Israeli-annexed Golan Heights, near Merom Golan on the border with Syria, on Nov. 19, 2020. - PATRICK SEMANSKY/POOL/AFP via Getty Images

Foreign Minister Gabi Ashkenazi’s call Nov. 18 urging the Palestinians to return to the negotiating table without preconditions is highly unlikely to result in a renewed peace process with Israel. Ashkenazi took advantage of the media coverage of his meeting in Jerusalem with Bahraini Foreign Minister Abdullatif bin Rashid Al Zayani, who was on a historic visit to Israel, to convey a conciliatory message to the Palestinians a day after they announced the resumption of security coordination with Israel that they suspended almost a year ago.

However, Ashkenazi’s was almost a lone voice in the government, lacking any operational significance as long as Prime Minister Benjamin Netanyahu is still engaged with President Donald Trump.

Palestinian President Mahmoud Abbas severed security coordination in anger after Trump’s “deal of the century” for Israeli-Palestinian peace was unveiled in January and Netanyahu announced his intention to annex parts of the West Bank with Washington’s approval.

The coronavirus epidemic broke out in Israel in February, and Israel held  its third election in less than a year March 2, which like the two previous rounds failed to yield decisive results. Netanyahu’s Likud formed a unity government with the rival Blue and White party in May, followed a few months later by the signing of peace and normalization agreements with Gulf States, relegating the Palestinians to the nether margins of the Israeli-American agenda.

Joe Biden’s election as US president appears to provide Abbas with a lifeline after the acrimonious ties with Trump. However, no one in Israel is keen to rush back to the negotiating table, abandoned in the spring of 2014 when talks with the Palestinians, sponsored by US Secretary of State John Kerry during President Barack Obama’s second term, broke down.

The only other senior Israeli politician to refer to the encouraging message from Ramallah on renewed coordination was Defense Minister Benny Gantz, chair of the Blue and White party, who tweeted, “Coordination is a shared interest, beneficial to the security of Israel’s citizens, and critical to the welfare and economic well-being of the Palestinians.” Gantz then urged the Palestinians to return to negotiations with Israel, which he described as “the most promising route to a more stable and prosperous future for our region.”

Gantz’s statement is hardly a festive declaration, and it clearly does not convey practical and personal intentions for reviving negotiations with the Palestinians. He could have, for example, conveyed a direct message to Abbas and proposed a meeting, but he avoided doing so, for good reason.

Israel has once again embarked on the route to elections, which various assessments expect in March 2021 once a new president is installed in the White House. For now, Gantz, like Netanyahu, does not want to do anything that could hurt Trump as long as the current administrations in Washington and Jerusalem are involved in more burning issues, including shared defense and diplomatic ones. That is why his message was measured and general, focusing largely on the security implications of the Palestinians' announcement and ignoring their underlying political and diplomatic message.

Gantz, in fact, has never set out a coherent peace plan or solution to the conflict with the Palestinians in his three election challenges to Netanyahu. The former army chief is aligned with the political center-left and is known to favor a two-state solution, but the issue is not on his immediate to-do list. That is why, at this stage, the only relevant plan is the Trump blueprint. Gantz has never led a diplomatic agenda or any initiative for renewed negotiations with the Palestinians. Even when he joined the Netanyahu government in May, he did not demand the resumption of negotiations, instead targeting the fight against COVID-19 and beefing up Israel’s embattled legal and law enforcement institutions.

Netanyahu, as expected, chose to ignore the conciliatory signals sent up by the Palestinian leadership, which views Trump as its archenemy. If he can, Netanyahu will wait for Biden’s entry into the White House before dealing with the Palestinian issue. In the remaining weeks until then, Netanyahu will focus on maximizing the benefits of normalization with the United Arab Emirates, Bahrain and Sudan, achievements that will feature prominently in his next election campaign, including highly publicized visits of senior Emirati officials to Israel and a future historic visit of his own to the Emirates. To ensure they do not steal his limelight, he has instructed all government ministers to avoid travel to Israel’s new partners in peace without his permission and prior to his own visit.

Netanyahu is obviously led by political considerations as he once again contemplates a complex election campaign in the coming months. He will need all the support he can muster from his political base to survive and therefore has no incentive to launch negotiations with the Palestinians that are bound to involve talks of a two-state solution. A senior diplomatic source who has been at Netanyahu’s side in past negotiations told Al-Monitor on condition of anonymity, “Netanyahu will wait for the changing of the guard in Washington and Biden’s inauguration. He knows the Palestinian issue will resurface and be restored to the agenda but he will manage. If need be, he will even renew talks with the Palestinians as he has in the past. What came out of these talks? Not much.”

The agendas of Israeli politicians, especially in the shadow of the coronavirus, reflect public sentiment. In recent years, Israelis have grown indifferent to prospects of negotiations with the Palestinians, an issue that once topped election campaigns and generated stormy arguments between the political left and right. The prolonged freeze in negotiations, combined with relatively few security threats, have made it possible for most Israelis to set aside the conflict with the Palestinians, certainly against the backdrop of the normalization with Arab states.

The chances of leading Israeli political candidates placing talks with the Palestinians, or annexation for that matter, at the top of their agenda appear slim. Even chair of the pro-settler Yamina party Naftali Bennett, who represents the ideological right and the settlers and currently seems to pose the main threat to Netanyahu’s reelection, has avoided handling this controversial, hot potato issue. Although a fervent advocate of annexation, Bennett has declared in several recent interviews that as prime minister he would focus in the coming years only on suppressing the coronavirus, economic recovery and bridging the divide in Israeli society. Bennett is doing so because he realizes that his meteoric rise in the polls in recent months stems from his focus on people’s daily concerns as they deal with a health and economic crisis, and that the minute he starts talking about annexation of territories, many potential voters will turn their backs.