The peace plan presented by US President Donald Trump could serve as a platform and incentive for Blue and White leader Benny Gantz to accept the formation of a unity government with Prime Minister Benjamin Netanyahu. 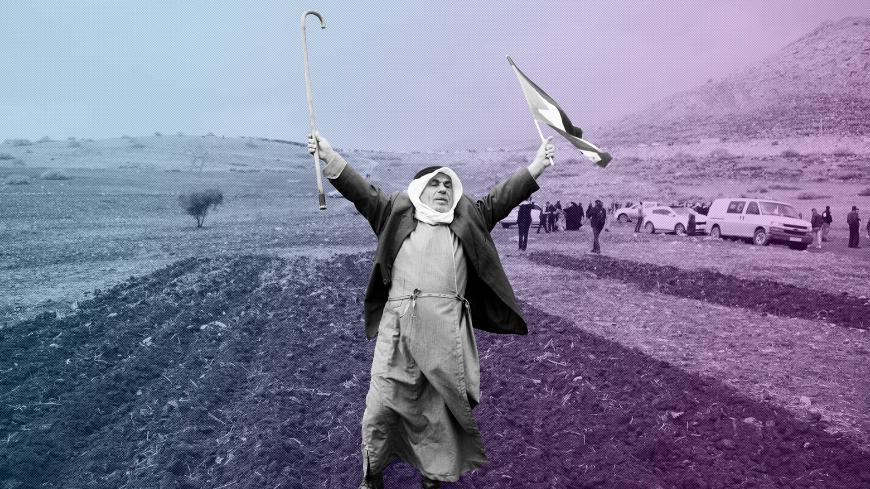 A demonstrator holds up a cane and a Palestinian flag during a protest against the US President Donald Trump’s Middle East peace plan, in the Jordan Valley, West Bank, Jan. 29, 2020. - REUTERS/Raneen Sawafta

A long day of silence had passed from the moment US President Donald Trump revealed his "deal of the century" Jan. 28 until Chairman of the Blue and White party Benny Gantz responded to it by declaring that it reflects the basic principles of his party. Gantz called the plan a “historic opportunity” to reshape the boundaries of the State of Israel for generations to come. He then went on to explain that Prime Minister Benjamin Netanyahu will be unable to implement the plan because of the indictment looming over him. That is why it will be up to Blue and White to implement it. Gantz’s remarks reflect the views of the senior Blue and White party leadership. They think that the plan “meets all of our security concerns and creates an opportunity for a different approach to the conflict,” as No. 2 party member Yair Lapid put it.

The problem facing the Blue and White party is that the deal of the century is identified more with Netanyahu than it is even with Trump. One month before the third round of the March 2 election against Netanyahu, it is incumbent upon them to find a way to embrace the Trump plan and Trump himself, while at the same time removing Netanyahu from the equation. It is not at all sure that this is possible. What can be said with the utmost confidence is that after three years of headlines and hot air, the elusive deal of the century, which once looked like it would never be reached, came as a big surprise. It is a formative event in Israel’s political debate, changing agendas from top to bottom. It officially announces that the era of Oslo — the years in which debate centered on support or opposition to a two-state solution — is now over.

The big turnabout took place on the evening of Jan. 28, when the 45th president of the United States put a plan on the table that shattered the old Oslo paradigm. The new plan clearly meets Israel’s demands. It dismisses key issues in advance, like the right of return for Palestinian refugees and the partition of Jerusalem; it determines that West Bank settlements will not be evacuated; and it sketches new borders for the partition of the land. Even before giving Israel the green light to annex 30% of the West Bank, it forces the various streams in Israeli politics to formulate their positions vis-a-vis the plan.

Over the last three decades, multiple peace plans have been developed and put on the table by various American presidents. In each case, the Israelis and Palestinians engaged in direct negotiations, based on the initial assumption that Israel will have to give up territory, evacuate settlements and partition Jerusalem. All of Israel’s prime ministers after late Yitzhak Rabin — Shimon Peres, Netanyahu, Ehud Barak and Ehud Olmert — negotiated with the Palestinians based on the vision of a two-state solution. The right opposed this categorically, while the center-left supported it. In fact, it was the direction they chose from the outset. As for Netanyahu, it will be remembered that during his first term as prime minister (1996-99), he made a commitment to continue implementing the Oslo Accord, largely as a result of enormous pressure from US President Bill Clinton. Despite panicked cries on the right, Netanyahu went on to sign the Hebron Protocol and the Wye River Memorandum, too. In 2009, during his second term as prime minister, Netanyahu delivered his Bar Ilan speech, expressing support for the idea of a two-state solution, this time due to pressure from US President Barack Obama. Prime ministers Barak and Olmert went very far, each in their own way, in their concessions to the Palestinians, who even expressed a willingness to partition Jerusalem.

Trump turned everything around. From now on, his plan offers a fresh new perspective on the problem. From the moment an American president adopted an approach that removes the old principles of the negotiations, it has been difficult to see how an Israeli prime minister could ever return to the idea of partitioning the country and even Jerusalem on the basis of the old outlines. In that sense, the Trump plan is historic. Netanyahu is the power behind it. It was written on the basis of his vision, but it is not at all certain that he will be able to implement it.

And so, for the first time in quite a few years, it looks like the current election will focus on the diplomatic process. The left opposes the Trump plan, claiming that there is no alternative to direct negotiations between Israel and the Palestinians. The No. 2 member of the Labor-Gesher-Meretz party, Nitzan Horowitz, described the annexation of the territories as a destructive move. The Arab Joint List also rejects the Trump plan unequivocally. “This is not a peace plan. It is a war plan,” said Knesset member Ofer Cassif in response. Senior members of the party were of the opinion that given the Blue and White party’s support for the plan, chances are slim that the Joint List will recommend Gantz to form a new government.

On the other side of the political spectrum, supporters of the ideological right — particularly among the settlers — oppose the plan, too, claiming that it includes recognition of a Palestinian state. The leaders of the Yamina list — Defense Minister Naftali Bennett and former Minister Ayelet Shaked — called on Netanyahu to annex the settlements and the Jordan Valley immediately, even before the election.

While the Blue and White party was apparently caught unready, they have decided to embrace the plan. Of course, they would have preferred to have the plan presented after the election. The release of the plan now foils their campaign strategy of focusing on Netanyahu’s indictment and reduces the attention it would otherwise have paid to Netanyahu’s criminal behavior. Meanwhile, Netanyahu will not let the Trump plan die out, even if he is unlikely to impose Israeli sovereignty on the settlements and the Jordan Valley before the upcoming election as he hoped.

What all of this shows is that the political implications of the Trump plan are significant, even if polls conducted after its release continue to show the two blocs in a dead heat, with no decisive outcome. The Likud has gotten a little stronger, but not enough to ensure that Netanyahu will continue as prime minister. Pollsters believe that this will be the situation on election day as well.

Given these circumstances, the Trump plan can serve as the platform for a unity government. Both the Blue and White party and the Likud see the plan as a once-in-a-lifetime historic opportunity. It looks like Netanyahu wants to see that unity government happen, too. After all, he requested the Trump administration for Gantz to be kept in the loop for the past few months, based on his assessment — before the Knesset was dissolved and a third round of elections was called — that the plan would form the basis of a unity government. The burden of criminality weighing down on Netanyahu will once again make it difficult to form such a government, but on election night, once it is obvious that no party has won a decisive victory, it seems as if the plan for a unity government will be raised again. In that case, the “historic” Trump plan could be the bridge needed to achieve that.