Israel's Gantz presides over collapse of Blue and White

Blue and White leader Benny Gantz, the only real alternative to Prime Minister Benjamin Netanyahu, now collapses politically, taking down with him the whole center-left camp. 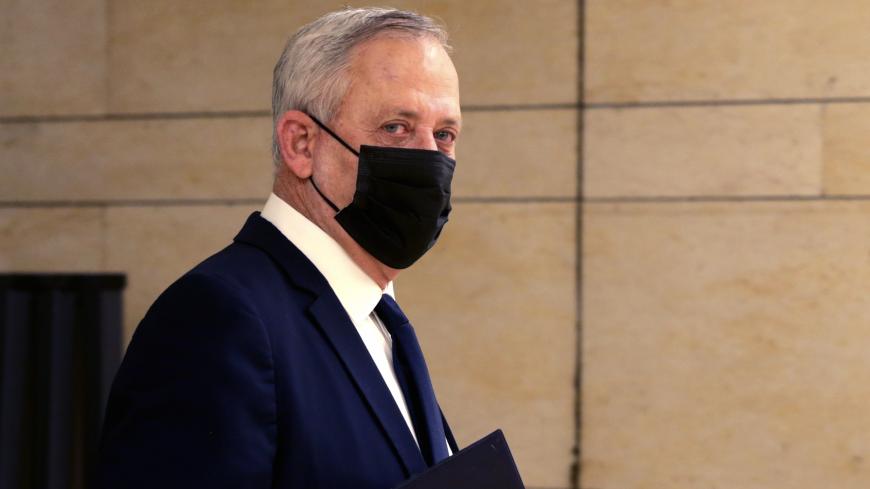 Will Defense Minister and Blue and White Chairman Benny Gantz decide to run in the upcoming March elections or will he step down? This thorny question has occupied the entire political system, and Gantz himself, in recent days.

The man who until seven months ago headed the second-largest party and represented the hopes of the Israeli center to replace Prime Minister Benjamin Netanyahu now finds himself in a desperate political and public conundrum as he watches his party disintegrate in front of his eyes.

Recent polls have shown that the Blue and White party under his leadership is getting dangerously close to the electoral threshold, with only five Knesset seats. Almost every day, Knesset members are quitting or being driven out by Gantz; others are rebelling publicly against all of Gantz’s decisions; and his former high-ranking partner, former Chief of Staff (Foreign Minister) Gabi Ashkenazi, is apparently on his way out. He might even announce his departure as early as tomorrow.

The collapse of Blue and White is the epitome of the downfall of a dream. No less than six parties are vying with one another to enter the vacuum. Some of the parties have only been cobbled together in recent days, including a party headed by Tel Aviv Mayor Ron Huldai. The new party of Huldai will be announced this evening, with the goal of becoming a new political home and to spread hope. Justice Minister Avi Nissenkorn announced this afternoon that he was quitting Blue and White and will be joining Huldai. Following his announcement, Gantz asked Nissenkorn to resign from his ministerial position. The survey experts claim that at least two of the six center-left parties will not reach the electoral threshold.

The total downfall of the center-left camp is not only expressed in its fragmentation but also in the hemorrhaging of numerous votes into clear-cut right-wing parties such as that of former Minister Gideon Saar, who recently quit the Likud, and of Yamina, headed by Naftali Bennett. Both of these are ultra-right-wing political parties, and both contain religious elements.

According to current predictions, more than 15 of the mandates that voted for Blue and White in the three election campaigns will fall into the hands of Saar and Bennett, including typical secular left-wing voters. The main reason for this strange political behavior? Blue and White voters became desperate over their failure to replace Netanyahu and hope that maybe this time Bennett and Saar (who are running against the prime minister) will succeed where Gantz failed. The main goal: to remove Netanyahu, period.

Therefore, Yesh Atid Chairman Yair Lapid’s biggest mission until elections (together with Huldai) is to return the Blue and White voters to their camp. But that is not simple at all.

Thus, this is the center-left’s main weakness in the upcoming elections: There is no hero, no single leader to face down Netanyahu. Lapid, for example, has failed to breach the glass ceiling regarding his suitability in polls to replace Netanyahu and rule the country. Instead, Lapid trails behind Saar and Bennett in this context, while Netanyahu retains his high ranks in rulership suitability, way over the other contenders.

It is not easy to be Benny Gantz these days. Many voices call on him to simply announce defeat and go home. But as of now, he isn’t giving in, and his close associates who spoke to Al-Monitor say he is very motivated and filled with fighting spirit. He will not abandon the party to Ashkenazi, they say.

Feb. 4 is the deadline for submitting party lists to run at the general elections. The assessment is that until then — and so long as Gantz’s position in the polls worsens — more and more pressure will be inflicted on him to withdraw from the race so as not to waste precious votes.

Gantz is motivated to continue, but he is also bitter and angry. He is a leader without a following, a chairman of a party without a party, and he finds it hard to make decisions. For example, last week Gantz supported the COVID-19 Cabinet in its decision to impose a closure on fifth- through tenth-grade students. Then, on Dec. 27, members of his own faction in the Knesset’s Educational Committee rebelled and informed him that they would vote against the decision. He was forced to fall in line with them, thus he emerged as a weak leader who is governed by his own backseat Knesset members, whom he himself brought into the Knesset.

This also happened on Dec. 22 when three members of Blue and White voted in favor of dispersing the Knesset — against Gantz’s wishes — thus causing the elections to be held earlier than planned. This rebellion revealed to the world that Blue and White is on its last legs.

The demise of Blue and White did not start today; it probably started when Gantz decided to join Netanyahu in May 2020 when COVID-19 was at its height in Israel. This decision led Yesh Atid — which was part of Blue and White — to dismantle the party. Immediately, the two sections of a party that had exemplified united ranks and new hope immediately became political rivals. Lapid was appointed head of the opposition and went out to demonstrate against the Gantz-Netanyahu so-called Unity Government.

Thus, Gantz’s decision also divided the electorate that had already started to abandon him. The virtual Knesset seats then made their way in polls to Lapid and afterward to Bennett and Saar.

The situation of Gantz represents the greatest low point of Israel’s center-left, which had led the country for dozens of years and established its foundations. It’s a time of confusion, despair and tailspin. However, the argument that “it’s all because of Netanyahu” is not the whole truth.

The truth is that a political camp that is not able to produce a leader and an alternative over the years needs to look itself in the mirror and ask what went wrong. One of the explanations for the current situation is that from one election campaign to another, the “Anyone but Netanyahu” slogan became the be-all and end-all. The slogan brainwashed worldviews and political paths. The “Anyone but Netanyahu” sentiment became so powerful and irresistible that the leaders of the camp forgot the main point: They needed to adapt themselves to a changing world, even regarding the two-state issue.

When Netanyahu surprised everyone last summer with normalization with Arab countries, he revealed the center-left's weakness as an alternative viewpoint that has been reciting the same old song for 20 years, which is that only peace with the Palestinians will prepare the road to diplomatic relations with the countries of the region. Netanyahu’s opponents wasted precious years on the “Anyone but Netanyahu” flag, until they reached the last elections with a meager electorate and no leader at all.