Gantz opts for a coronavirus government

By candidating for the job of Knesset speaker, Blue and White leader Benny Gantz gave the sign that he is willing to join a Netanyahu-led unity government. 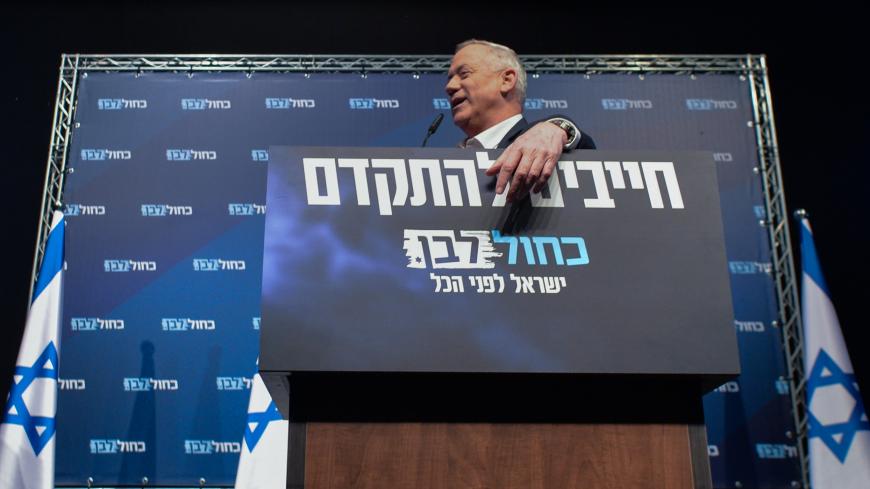 The Blue and White party collapsed like a house of cards March 26, and with it, the most meaningful challenge to Prime Minister Benjamin Netanyahu’s rule in the past decade. It will just be a matter of days before Israelis are introduced to their new “coronavirus government,” with Blue and White leader Gantz holding either the defense or foreign affairs portfolio. Based on the emerging agreement, he will replace Netanyahu as prime minister in another year and a half.

Gantz made the most difficult decision of his political career, knowing that it would lead to the dismantling of Blue and White. He struggled and anguished over it, and he postponed it to the very last minute in the hope that Yair Lapid, the No. 2 member of Blue and White, would lift his veto of a Netanyahu government. At the same time, however, he also came to realize that there was no way for him to form a minority government. He went with the polls, which showed that the people were fed up with all the political squabbling and most of his voters wanted a unity government, even if it included Netanyahu. The coronavirus had the final word.

The problem was that as much as Gantz leaned toward a unity government, Lapid and his ally, Yisrael Beitenu Chairman Avigdor Liberman, stood firm in their opposition to the move and used whatever power they had to block it. As leaders of the contrarian line against the Blue and White party chairman, they even tried to take over the Knesset with their “Anyone but Netanyahu” bloc of a supposed 61 seats. Only this, they claimed, would bring an end to Netanyahu’s government.

What Lapid never fully understood about Gantz was that despite his kindly demeanor and his maneuverability, he could also make difficult decisions in a matter of minutes without the slightest display of emotion. That is exactly what happened too, when Lapid yanked on the rope a little too hard. “Benny [Gantz] realized that Lapid and Liberman were neutralizing him. He didn’t have a government, and they were preventing him from leading in his own way, so he decided to put them to the test,” one of Gantz’s senior advisers told Al-Monitor on condition of anonymity. The test that Gantz posed to Lapid on Thursday morning was actually quite simple. He asked him to shelve his plan to get Knesset member Meir Cohen (of Lapid’s Yesh Atid party) elected speaker of the Knesset. Cohen was something of a red flag for the Likud. The decision to remove him from the running signaled that there was still room for negotiations with Netanyahu over a unity government.

But Lapid was adamant in his refusal to do that. According to someone close to Gantz who spoke on condition of anonymity, Lapid told him, “The only thing Netanyahu understands is strength. Any negotiations with him over a unity government should only take place after he has lost all control of the Knesset.” From that moment onward, the explosion was inevitable. Once it occurred, everything happened at dizzying speeds. No one who was in the Knesset that day could recall anything quite as surreal as what they were now witnessing. Gantz submitted his candidacy for speaker, while Lapid and Liberman, both of them stunned, left the plenum with their fellow party members during the vote. Instead, it was Netanyahu and his right-wing, ultra-Orthodox bloc that ended up voting for Gantz.

There can be no doubt that this was one of the most surreal and unusual days in the history of Israeli politics. With millions of Israelis sequestered in their homes and the Knesset operating within the guidelines regarding restrictions on gatherings because of the coronavirus, there was a sudden political explosion with far-reaching reverberations. Gantz was elected speaker of the Knesset because of the votes from the right-wing, ultra-Orthodox bloc, while Lapid and the No. 3 member of the Blue and White party, former Chief of Staff and Telem party chairman Moshe Ya’alon, rushed to ask the Knesset for permission to split from the Blue and White party and form a faction of their own.

Liberman stormed out of the Knesset before the vote for Gantz even took place and instructed his fellow party members to do the same. He knows that he is one of the biggest losers in the dismantling of the Blue and White party. The collapse of Blue and White meant the failure of his own efforts to bring down Netanyahu. He has maintained his silence ever since.

As was expected, reactions from Gantz’s former partners were harsh. Lapid and Ya’alon called a press conference in Tel Aviv, at which they had some sharp comments about their former party chairman. “Together with us, over a million Blue and White voters marched from street to street and from bridge to bridge. … They feel betrayed today, and justifiably so. Their votes were stolen and given as a gift to Netanyahu,” said a stern-faced Lapid. Ya’alon was just as blunt: “Gantz surrendered today without a battle and went crawling to a Netanyahu government,” he declared. While this was going on, some of Gantz’s supporters organized a demonstration outside his home in Rosh HaAyin to express their outrage over his decision. They showed up waving black protest flags. For his part, Gantz showed restraint in his response to these declarations by Lapid and Ya’alon, tweeting, “At the end of the day, I believe we must not drag Israel to a fourth election at such a challenging time. … We disagree on that point.”

So what’s next? Gantz took an enormous risk. He may even have ended his political career. But he also showed leadership and an ability to make tough decisions, for which he will be credited if the coronavirus crisis is handled responsibly. Furthermore, Gantz was able to force Netanyahu to make major concessions in their negotiations. He got the prime minister to give up the Justice Ministry, which is especially dear to him but which will now be handed to someone of Gantz’s choosing. And he got Netanyahu to put a stop to all the impending immunity legislation. No less important than all of that, Gantz managed to limit Netanyahu’s term to a year and a half. What Gantz proved to the Israeli electorate, already exhausted by a series of undecided elections, was that he was prepared to sacrifice himself for the sake of a united leadership at a very difficult, historic juncture in the nation’s history.

Unlike Lapid and Liberman, Gantz and the person occupying the No. 4 slot on the Blue and White list, former Chief of Staff Gabi Ashkenazi, understood that the moment unfolding in front of them was much bigger than their “Anyone but Netanyahu" agenda. Neither Gantz nor Ashkenazi was ever happy about their party’s connection with the Arab Joint List, and they knew that they would pay for it in the next election. The most recent polls showed how damaging this potential partnership really was. They showed the Likud getting significantly stronger, while the Blue and White party lost strength.

Israel’s political map ended up getting redrawn on March 26. Netanyahu exhibited a rare ability to maneuver around the obstacles, including his indictment, the coronavirus and the fact that he did not win the March 2 election. What he actually succeeded in doing was to bring about the dismantling of the Blue and White party, survive in power for another year and a half, and delay the start of his trial. As for his fight with Liberman, Netanyahu can take credit for a total knockout.