Does Israel's Gantz stand a chance at establishing a government?

The chances of Blue and White leader Benny Gantz establishing a minority government with Avigdor Liberman and the support of the Arab Joint List are not high, yet the risks he is taking are huge. 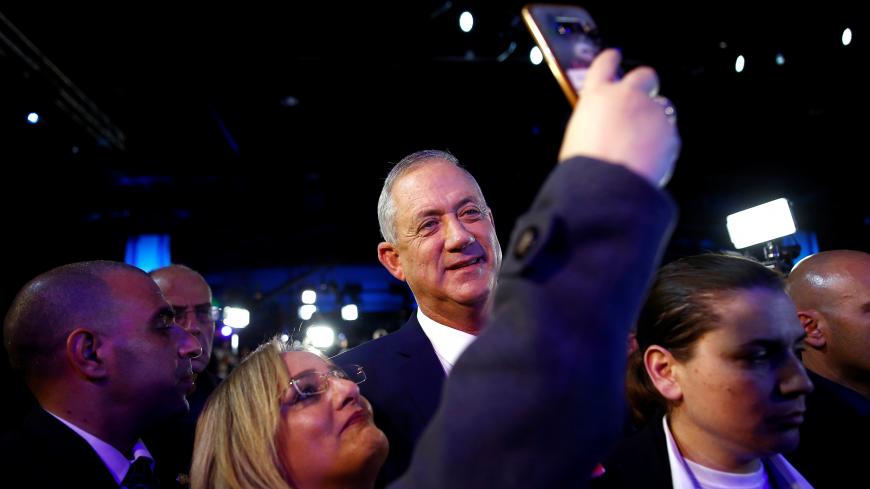 Blue and White party leader Benny Gantz poses for a picture with a supporter after speaking to supporters following the announcement of exit polls in Israel's election at the party's headquarters, Tel Aviv, Israel, March 3, 2020. - REUTERS/Corinna Kern

A bargaining chip for dealing with the Likud. That’s how Blue and White party leader Benny Gantz described the option of forming a minority government with the support of the Arab Joint List after the September 2019 election. For the past few days, however, he has pushed ahead with the same idea and fully intends to implement it.

The one person behind the scenes who has given him the confidence he needs to push ahead with this is Yisrael Beitenu party chairman, Avigdor Liberman. Liberman has shifted gears in his plan to remove Prime Minister Benjamin Netanyahu from politics once and for all. On March 5, it became obvious that he was willing to walk back the promise most identified with him that he would not cooperate with the Joint List. In the past, he even charged its members with aiding and abetting terrorism and told them to go to “that parliament in Ramallah.” Now, however, when forced to choose between his promise to never sit in a government with Netanyahu and his total rejection of the Joint List, Liberman chose to break the latter promise.

It was the kind of turning point in the plot, which restored hope to the Blue and White party after failing to win at the ballot box March 2, after yet another election. The Likud and the right-wing Orthodox bloc actually got stronger, and the Blue and White party and its leaders slipped into despair. But then Liberman showed them that all was not lost, and that when dealing with Netanyahu, they had no choice but to break out their somewhat more unconventional weapons. Besides, Liberman already promised that there wouldn’t be a fourth round of elections.

His calculations were simple: There is a common interest among the anti-Netanyahu bloc — Blue and White, Labor-Meretz-Gesher, Liberman and the Arab Joint List — to get rid of Netanyahu immediately, and this bloc holds 62 seats, compared to Netanyahu’s own bloc of 58 seats. As far as Liberman is concerned, it is all one move, and seeing it through would mean that the right-wing, ultra-Orthodox bloc of Netanyahu would be history. It will then be possible to form a stable unity government without Netanyahu.

This tactic was based on the assumption that the Likud and the right would feel so threatened by the possibility of losing power that they would break apart Netanyahu’s bloc.

The plan sounded promising. The problem, as became quite clear over the last few days, is that it wasn’t worked out to the last detail. Two right-wing Knesset members from the Blue and White party, Yoaz Hendel and Zvi Hauser, refuse to support a minority government backed by the Joint List. Without them, the chance of it actually happening is slim. They held a series of intense talks with Blue and White senior Moshe Ya’alon, who brought them to the Blue and White party in the first place. He went so far as to demand that they resign from the Knesset if they don’t support the move. Yet even that was not enough to convince them to change their minds. Both Hendel and Hauser are standing firm for now, and have no plans to resign.

Netanyahu jumped on this opportunity to attack Gantz, calling him “Erdogan.” This was, of course, his way to hit back at the Blue and White party, which used their campaign to compare him to Turkish President Recep Tayyip Erdogan, the “dictator” who came to power in a democratic election.

As it turned out, the deal wasn’t sealed with the Joint List either. Over the last few days, its members have announced that they will not recommend Gantz without a series of steps on his part, including a promise to repeal the Nationality Law and reject the Trump deal. The problem is that Gantz already embraced the deal, calling it “historic.”

What all this shows is that Gantz may be galloping ahead, toward the goal of a minority government, without preparing himself adequately for such an extreme move. It could cause him to lose everything. If this attempt fails, it is unlikely that he will continue to lead the Blue and White party. In fact, its voters could start to abandon the party altogether, after following it through thick and thin in the past three elections. Furthermore, the Blue and White party will no longer be able to run as a centrist party with right-wing tendencies. As much as it has pulled through everything and acted tenaciously as a united party, it could split. That would be one failure too many. Once that happens, the right will get even stronger in the polls.

Given the Hauser and Hendel crisis, it seems obvious to everyone that the Blue and White party will not last long in its current constellation. The uncomfortable truth jutting out from the polls is that most of Israel’s Jewish citizens, including a significant number of Blue and White supporters, are unwilling to accept the notion of cooperation with the country’s Arab Knesset members. In contrast, most of the Joint List’s Knesset members have a strong sense of identity as Palestinians. They do not hide that, nor will they suppress it in any way, when faced with Jewish nationalism. This is the source of their strength among the Arab public, which gave them a historic 15 seats.

On the other side of the divide is Netanyahu, but it is not just him either. During the last election campaign, all the leaders of Blue and White swore that they would not, under any circumstances, sit in a government backed by the Arab Joint List. Gantz was asked about this in every interview he gave, right up to the election. In response, he declared again and again that it would never happen. Former Chief of Staff Ya’alon said that these were lies being spread by Netanyahu, while the No. 2 in the party, Yair Lapid, reiterated confidently that there would be no government supported by the Joint List. They were not speaking in a vacuum either. All internal polling by Blue and White in the weeks leading up to the election indicated that the party was losing seats to the Likud and other parties on the right. Netanyahu was able to “stick us with the Arabs,” someone said at a Blue and White party campaign meeting, according to a source who spoke on condition of anonymity. And in fact, Netanyahu ran a successful campaign, arguing that Gantz would not have a government without the Joint List. This message trickled down to the wider public, as much as Blue and White did everything they could and more to prove that Netanyahu was spreading lies.

For now, Gantz’s actions in favor of forming a government supported by the Joint List only validates Netanyahu’s claim. It certainly poses a problem for those Blue and White voters who lean to the right, but also for those with more centrist views. The immediate consequence of all this is that if there is a fourth round of elections, the Blue and White party will not run with the same list as it has now, and that this will likely have implications in the voting booth.

These are tense times, different from anything the Israeli political system has seen since its inception. On one side is a prime minister who is about to stand trial for bribery, but is nevertheless more popular than ever in his own party, but also among supporters of the right-wing, ultra-Orthodox bloc. On the other side are the extreme steps being taken to bring him down. What all this means is that this political quagmire is far from over. While the option of a unity government is not on the table, it may yet resurface as a result of the impending crises surrounding the coronavirus and the economic emergency that will likely ensue. That would offer a good opportunity for everyone to climb off of their high horse and avoid a fourth round of elections, from which the only person who would really benefit is Netanyahu.