Blue and White leader Benny Gantz is now ready to do whatever it takes to topple Prime Minister Benjamin Netanyahu, including going back on his promise not to establish a government backed by the Arab Joint List. 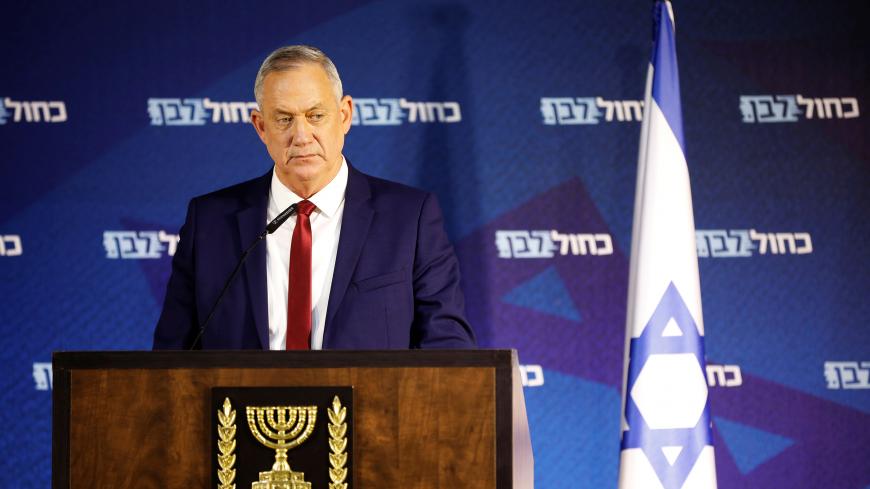 Lt. Gen. (res.) Benny Gantz has probably never faced as painful and cruel a dilemma in his entire four decades in uniform and as Israel’s top soldier as he is now confronting as leader of the Blue and White party. The March 2 election results maneuvered Israeli politics into the most complicated situation possible: On the one hand, a clear victory for the Likud on the party level (36 Knesset seats for the Likud compared with 33 for Blue and White). On the other, a no less clear victory for Blue and White on the coalition map (62 Knesset seats for the center-left bloc compared with 58 for the right-wing, ultra-Orthodox bloc). An impressive electoral victory for Prime Minister Benjamin Netanyahu in personal terms, but failure of his truly important mission — sufficient votes for a narrow government comprised of his political base of right-wing, ultra-Orthodox parties. Netanyahu desperately needs his own government for him to continue serving as prime minister throughout his trial.

Gantz has already made his historic strategic decision. He made that decision shortly after the publication of the March 2 election results, which showed that Blue and White could form a minority government if at least 12 of the 15 newly elected lawmakers of the Arab Joint List were to vote in its favor. Gantz decided to forge ahead with this move, no matter the cost. Yisrael Beitenu leader, the hawkish Avigdor Liberman, offered his silent support.

After the last election round in September 2019, Liberman hesitated to support such a government. With his visceral hostility toward the elected representatives of the country’s 21% Arab minority, he finally decided against it. But the results of the March 2 election convinced Liberman that there was no other way. In order to free Israel from Netanyahu’s chokehold, Liberman would have to swallow the bitter pill and cross what was until then a red line. He realized that the only way to crack Netanyahu’s bloc of right-wing, ultra-Orthodox parties, which now comprises 58 Knesset members (out of 120), and to quash the specter of a fourth election, he would have to back a Gantz-led government, which would need the vote of at least 12 Arab lawmakers to be formed.

Originally, the intention was to make do without the votes of three Knesset members of the nationalist Arab Balad party, which is one of the four constituent parties of the Joint List. Most Jewish Israelis cannot stomach the idea of a government backed by Balad, which disavows the principle of a Jewish state, espousing instead a multinational state, and is perceived as more radical than the other Arab parties. When doing the math, if the 12 Joint List Knesset members and Liberman’s seven vote in favor of a center-left coalition led by Blue and White (without joining it), Gantz would have the support of 59 Knesset members to form a government, compared to the opposing bloc of 58. This scenario has Liberman joining the coalition at a later stage, once other parties start trickling out of the Netanyahu-led opposition to partake in the perks of government. Meanwhile, the government would be sworn in, Netanyahu would depart the official residence on Balfour Street and Gantz would move into the prime minister’s office. Toppling a government requires the backing of 61 Knesset members so that a Gantz government might survive if Blue and White, a hodgepodge of disparate elements, displays a modicum of political skills.

Gantz knows that if fourth elections are held later this year, Netanyahu stands a good chance of garnering the coveted 61-seat Knesset majority. He now has to choose between two pledges he made to voters — to shun a government led by Netanyahu, who is under indictment for bribery, and his promise not to form a government that would be backed by the Arab parties. Gantz opted to violate his second promise. “We intend to form a government as quickly as possible, to swear it in as quickly as possible sometime in March and to send Netanyahu home,” a Blue and White leader told Al-Monitor on condition of anonymity.

However, declarations of intent are one thing, skillful execution is another. Recent days have landed a series of political disasters on Gantz that severely undermine his prospects of swearing in a minority government with the support of Arab Knesset members, a move with no precedent in Israeli history. In the face of aggressive pressure being brought to bear on Blue and White’s lawmakers by the political right, Gantz finds himself at a grave disadvantage.

The first to crumble under pressure was Blue and White’s right-wing flank, Knesset members Zvi Hauser and Yoaz Hendel, who worked closely with Netanyahu in senior positions until he showed them the door in 2012 for exposing alleged sexual harassment by Natan Eshel, a loyalist of the Netanyahu couple. In 2018, the two joined the small Telem party led by former Defense Minister Moshe Ya’alon, which subsequently merged with Blue and White. While Ya’alon reluctantly agreed to Arab backing for a narrow coalition, for the sake of ousting Netanyahu, Hauser and Hendel have reportedly refused to go along. Gantz reprimanded them, but he does not appear to have overcome their refusal to support a government backed by Arab legislators.

The second blow came March 10, when Knesset member Orly Levy-Abekasis, who ran in this month’s election with Labor party leader Amir Peretz on a joint ticket with the left-wing Meretz party, announced that she would not back such a government either, reversing her previous stand. In interviews she gave in recent weeks, Levy-Abekasis said she would have no trouble serving in a government coalition backed by Arab votes. Levy-Abekasis, whose father David Levy was foreign minister in Netanyahu’s first government, appears to be making her way back to the Likud. That would boost Netanyahu’s bloc to 59 Knesset members, further eroding Gantz’s prospects of forming a minority government.

Gantz has not given up. He enjoys the sweeping support of two members of the Blue and White leadership quartet —​ Ya’alon and centrist politician Yair Lapid (albeit stormy reservations on the part of Gabi Ashkenazi, the fourth quartet member) and is now examining prospects of all 15 Arab Joint List lawmakers voting in favor of a minority government. That should suffice if Knesset members Hauser and Hendel agree to abstain in the vote or absent themselves from the plenary, rather than voting nay. If Netanyahu had a 61-seat majority he would have sworn in a government without bothering to examine the identity of its supporters. Gantz is trying to do the same thing, but his prospects of success are slim.

The latest developments have eroded the clear political advantage Gantz enjoyed over Netanyahu in recent days, and he now faces a dead end. Prospects of his success have plunged dramatically. Netanyahu knows he has probably scuttled a minority government. Gantz is left with the choice between agreeing to a fourth round of elections and joining a Netanyahu-led government in a power-sharing agreement of a rotating premiership. Senior Likud figures are now claiming that a blueprint proposed by President Reuven Rivlin last year, which would give Netanyahu first turn as prime minister for eight months, after which he would switch with Gantz, is no longer relevant. Netanyahu is now going for broke, demanding two full years on the job before handing over to Gantz. That would place him in a position of power as he faces the three Jerusalem judges named to try him (with a trial set to open March 17), enabling him to conduct negotiations with the attorney general on a possible plea bargain as an incumbent prime minister.

That goal now appears closer than ever. The rollercoaster of Israeli politics is charging forward at record speed. That, along with the coronavirus outbreak (almost 100 Israelis have been diagnosed with the disease), the looming economic crisis and ongoing political chaos, make for a state at a total impasse.