Did Netanyahu celebrate his victory too early?

Prime Minister Benjamin Netanyahu thought that he had won the elections, but now finds out that the road toward a majority government is long, if not impossible. 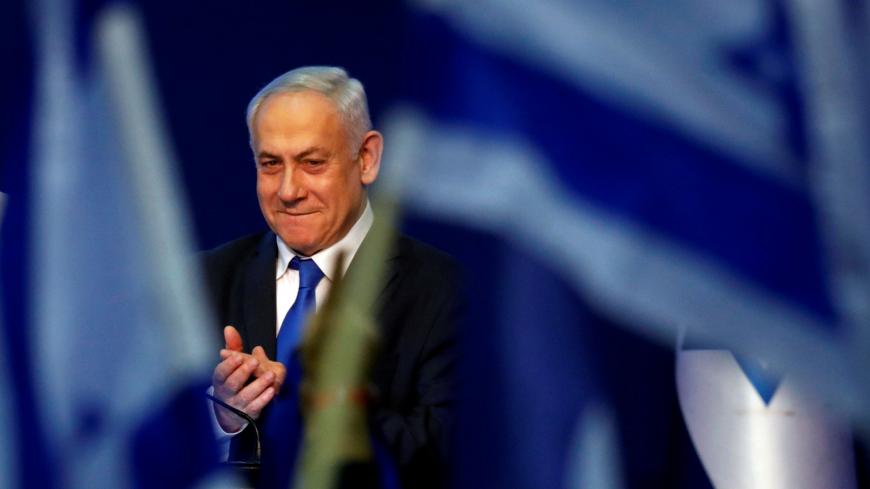 In the very early hours of March 3, Prime Minister Benjamin Netanyahu addressed his wildly cheering supporters about what appeared to be his biggest political victory ever. He had done it again. According to the exit polls aired at 10 p.m. local time on March 2, he was only a few tens of thousands of votes short of the 61 seats he needed for a Knesset majority. The feat that had appeared wholly impossible just weeks earlier was now happening in front of our eyes. “Tonight delivered a tremendous victory!” the jubilant prime minister declared. Netanyahu believed that as always, the real vote count would improve his Likud party’s showing even further and hand him the missing 61st seat. Even if the party fell short, at 60 seats, Netanyahu believed he could scrounge a defector from the ranks of the opposition that would allow him to form a government and lead it — while facing his criminal trial scheduled to start on March 17.

Less than two days later, Netanyahu was a political wreck. He found himself in the same situation as the late Shimon Peres, who went to sleep on May 29, 1996, as prime minister, confident in the election results projected by the exit polls that had him in the lead over his rival Netanyahu, only to wake up the next day as leader of the opposition. Netanyahu, in his first run for the premiership, had trounced him by a mere 30,000 votes.

Netanyahu has served as prime minister for 14 of the ensuing 24 years, breaking the cumulative term record set by the state’s first prime minister, David Ben-Gurion. Yet he is currently closer than ever to the end of his impressive career. The 60 Knesset seats projected by the exit polls dropped to 58 once all the votes were tallied. He had achieved a tremendous personal feat in bringing his Likud party from 32 to 36 Knesset seats, but failed in the real mission of culling a 61-seat bloc of support that would have enabled him to form his fifth government.

The disappointing vote count was only the beginning. The worst awaited Netanyahu on the morning of March 5. Avigdor Liberman, his once greatest loyalist turned demon in recent years, was now holding the political butcher’s knife over his neck with the announcement that his Yisrael Beitenu party would back newly proposed legislation barring an elected official under an aggravated criminal indictment from serving as prime minister. Should the opposition bill overcome the constitutional barriers to its passage, it would bring Netanyahu’s political career to an end in one fell swoop. Rather than an all-powerful prime minister, he would walk into the Jerusalem District Court as a run-of-the-mill defendant charged with bribery, fraud and breach of trust. His first court date, March 17, follows the swearing-in of the 23rd Knesset the day before. If a scriptwriter had proposed such a scenario for a TV series, he would have been summarily dismissed.

Netanyahu is desperate. “In this situation, he is capable of anything,” one of Netanyahu’s veteran, closest former advisers told Al-Monitor on condition of anonymity. “He is convinced he is being persecuted and he will do anything, including anything, to survive in power. He knows he cannot afford to walk into the courtroom as an average Joe, and is now regretting that he did not conduct negotiations on an honorable plea deal with the attorney general when it was still possible.”

Desperation was clearly written on Netanyahu’s face at the start of the meeting with the heads of his right-wing ultra-Orthodox bloc of parties whom he convened the morning after the elections. Turning to the board he had brought with him, he picked up an erasable marker, announced that he had won the elections and proceeded to tally the seats garnered by the parties in his bloc. He then discounted the 15 seats achieved by the Arab Joint List, thereby proclaiming himself a racist. When he needed the votes of the Arab alliance to allow him to dissolve the Knesset in May 2019, he had no qualms enlisting them. The same went for other votes in which he needed the support of the elected Arab officials, such as last year’s appointment of his nominee for state comptroller. Now, when the centrist Blue and White party threatens to form a minority government with the backing — albeit not the participation — of the Joint List, Netanyahu is up in arms, denouncing the plan as illegitimate, undemocratic, a putsch. Shockingly, wide swathes of the Israeli public support his racist pronouncements. At that same meeting with his allies, Netanyahu dropped quite a few hints suggesting that masses could be mobilized to take to the streets and foil the plot to unseat him. “My friends and I, like millions of citizens,” he declared, “will not allow this to happen.”

The dilemma is now in the “cockpit” of the Blue and White leadership — former army chiefs Benny Gantz, Gabi Ashkenazi and Moshe Ya’alon, and centrist politician Yair Lapid. They are debating whether to go for the proposed legislation that would bar Netanyahu from serving as prime minister as long as he is under criminal indictment, but are unable to ignore the massive elephant in the room: Formation of a minority government backed by the Arab Joint List.

While a handful of Arab citizens have served in Israeli governments over the years, and Arab parties have voted in favor of government initiatives, no Arab party has ever been included in a governing coalition in the state’s nearly 72-year history. According to pervasive assessments, Liberman, too, would be willing to vote for such a minority government led by Blue and White, ensuring the support of 59 of the newly elected Knesset members. (Three of the 15 Arab Knesset members, of the nationalist Balad faction, would not vote in favor.) The 58 lawmakers of the Netanyahu-led bloc (right-wing and ultra-Orthodox parties) would obviously vote “nay.” A minority government (two short of a narrow majority) would be formed and would be hard to topple. Blue and White proponents of such a scenario hope that eventually, Netanyahu’s bloc would disintegrate and some of its components would find their way into the ruling coalition, making for a majority government that would also enable Liberman to join. This complicated, multi-stage measure, not devoid of risks, has only one goal: Distancing Benjamin Netanyahu from political life.

Not everyone in the Blue and White party is enthusiastic. “A government with the backing of the Arab Knesset members will be the end of whoever forms it,” a senior party figure told Al-Monitor on condition of anonymity. “Anyone serving as prime minister with the votes of Arab lawmakers will be defeated in the next elections. The government will not last a full term. This is a gamble that is too risky.”

In recent days, one of the cockpit members, former Defense Minister Ya’alon, has undergone a dramatic change. His revulsion for Netanyahu and the events of the just-ended campaign left an indelible impression on him. Ya’alon now favors the idea of a minority government, as Lapid seemingly does. Ashkenazi is undecided, as is party chair Gantz. Netanyahu’s political fate is now in the hands of his political rivals, among them 15 Arab lawmakers. The only feasible way out for him is the formation of a power-sharing government with Blue and White, as proposed last year by President Reuven Rivlin. The question is whether he has partners for such a move.