On the backdrop of internal party disagreements, Blue and White leader Benny Gantz must make a decision on whether to join a Netanyahu unity government. 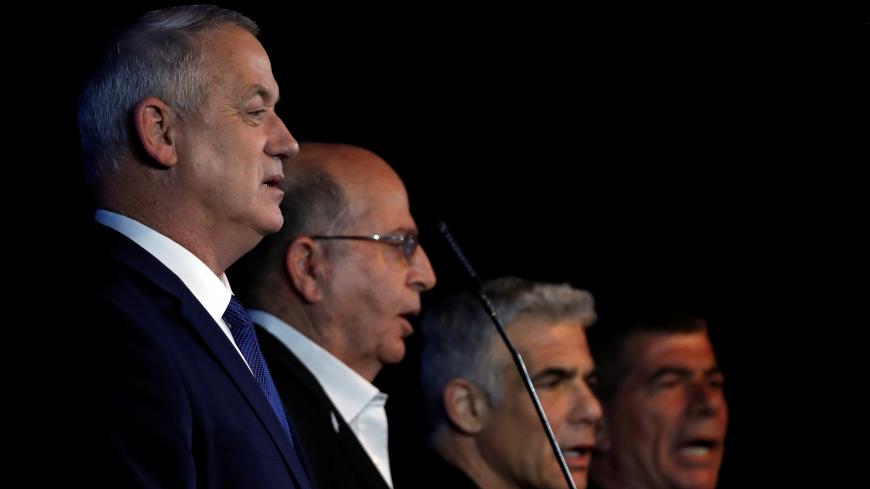 Prime Minister Benjamin Netanyahu is conducting a two-pronged campaign. He is seeking to isolate, contain and eliminate the novel coronavirus spreading throughout the country, at the same time making cynical use of the pandemic in an effort to impose the same fate on his political rival, Blue and White Chair Benny Gantz.

Netanyahu’s overriding goal is to dismantle the Gantz-led bloc of parties that coalesced against him following the March 2 elections, which accounted for 62 seats in the 120-member Knesset (although the bloc shrank to 61 after the desertion by Gesher leader Orly Levy-Abekasis). At this stage, Netanyahu appears to be advancing toward his goal, at least the political one. Blue and White, which only recently celebrated its first anniversary, is nearer than ever to being dismantled or splitting in two. One group would consist of the two former army chiefs, Gantz and Gabi Ashkenazi, who are willing to join a power-sharing unity government with Netanyahu as premier for the first part of its term, followed by Gantz. The other group would include the other two party seniors, Yair Lapid and former army chief Moshe Ya’alon. Neither is willing to join Netanyahu “for even a minute.”

On March 15, President Reuven Rivlin tasked Gantz with forming Israel’s next government after 61 Knesset members recommended him for the job. The 61 included all 15 members of the predominantly Arab unified Joint List. This historic endorsement would have been exciting had it not dealt a potentially severe blow to Blue and White. Many of its supporters from the soft right (as many as the votes needed for six or seven Knesset members) consider a government supported even just from the outside by an Arab party as a nonstarter. More specifically, two of Blue and White’s Knesset members, Zvi Hauser and Yoaz Hendel, have already announced they would refuse to vote for a Gantz-led government supported by Arab lawmakers, even if the Arab party won’t be part of the coalition. Thus, Gantz’s slim majority has shrunk from 61 to 59. Chances of establishing a narrow government until others from the right agree to join are close to nil.

Netanyahu is well aware of this. He has woven a trap around Gantz and is letting him stew within its confines. Once his 28-day deadline expires, it will be Netanyahu’s turn to take a crack at forming a government. His chances of mobilizing deserters from Gantz’s bloc are far greater than the reverse. Netanyahu’s bloc of right-wing, ultra-Orthodox parties is solid, loyal and more homogenous than the fragile, eclectic makeup of the center-left bloc, which is also less determined. Gantz knows that he must not give Netanyahu the chance to form a government, and even more so that he must not enable a fourth round of elections, which would bury Blue and White.

The drama now unfolding within Blue and White is therefore real, tormenting and potentially terminal. Ashkenazi favors accepting the situation imposed on the party and joining a government with equal representation for both sides and Netanyahu as its first leader, followed by Gantz. Gantz is leaning toward this option. Both are now regretting that they refused to accept a compromise outline proposed last year under which Netanyahu was supposed to govern for six to eight months and then take time out — declaring himself "incapacitated" because of his imminent trial — and allow Gantz to take over.

“Had we said ‘yes’ at the time, Gantz would have entered the prime minister’s office during the Passover holiday, which is less than a month away,” a senior Blue and White source told Al-Monitor on condition of anonymity. "According to that scenario, with Gantz as prime minister, Amir Ohana would not have been the justice minister and Naftali Bennett would not have been defense minister. The state would have been in a completely different situation, and after all, we established Blue and White for the sake of the state’s future.”

The two other members of the Blue and White leadership quartet, Lapid and Ya’alon, are no less determined, citing matters of principle. “We pledged to our voters that we would not sit under Netanyahu, and we are committed to that promise,” a Knesset member from this camp told Al-Monitor on condition of anonymity. “Voters will not forget our violation of this pledge, and in any case, chances are slim of Netanyahu sticking to the agreement [to cede his seat to Gantz]. Suffice it to examine what political deals he made good on during his career.”

Between these two camps is a third faction, which is not part of Blue and White but is far more determined than the sum of its parts. Its name is Yisrael Beitenu, and its leader is Knesset member Avigdor Liberman. Liberman wants Netanyahu’s head on a plate — a fate Netanyahu has justly earned. Liberman is a disciple of Tuco (played by Eli Wallach) from “The Good, the Bad and the Ugly.” If he has to shoot, he shoots. He does not talk. On March 16, immediately after the newly elected Knesset was sworn in, he tabled proposed legislation that would ban an elected official under criminal indictment from serving as prime minister. Boom. Liberman believes that the law, if passed, is the only way to remove Netanyahu from office without too many political headaches.

Liberman is trying to convince the Blue and White leadership that this move stands a good chance, but they are doubtful. The Likud would argue that such legislation is both personal and retroactive in nature, petitions would be filed with the Supreme Court, and who knows how it could all end. What is more, Netanyahu could simply ignore the law, call for a fourth round of elections and, borne on the wings of his voters’ anger at the attempt to "rob" him of his right to the premiership, finally win the 61-seat majority that has eluded him in the previous three elections. He could then revise the law at the next Knesset’s first sitting.

The fate of the Blue and White party will be determined within two weeks. Gantz will have to make a decision before his 28-day mandate expires. One of the options under discussion is not to dismantle the neophyte party but to split in two as a temporary measure. That would allow Gantz and Ashkenazi and about half the party’s 33 Knesset members to join the government, while Lapid, Ya’alon and the other half stay out but vote in the Knesset in favor of the government and its moves. They will not hold ministerial positions and will not violate their pledge to avoid joining a Netanyahu-led government. Once Netanyahu’s term, estimated at 12 to 18 months, expires, he would cede his seat to Gantz, at which time Lapid and Ya’alon would join the government. This would allow Gantz to protect his lifetime achievement.

After the September 2019 elections, this offer was made to Lapid, who rejected it — but this time is not last time. The ammo is running out. A fourth election would be tantamount to suicide. Lapid is also facing a tough choice. On the one hand, he believes that he stands a greater chance than his currently slim chances of one day being in line to replace Gantz if he sticks to his guns now and foregoes the perks of power. On the other hand, he will have a hard time carrying on from the wilderness of the opposition.

For now, Gantz is trying to dance at two weddings — although they look more like funerals — to keep his bloc intact (especially the support of the Arab parties and Liberman) while placating his furious voters, and at the same time to conduct the controversial negotiations with Netanyahu. This macabre dance will have to end at some point, and no one, not even Gantz, knows where.