Gantz made a tough decision. Will he regret it?

Blue and White leader Benny Gantz slammed the door on his anti-Netanyahu partners to join a unity government with the Likud, but will he ever occupy the Prime Minister's Office? 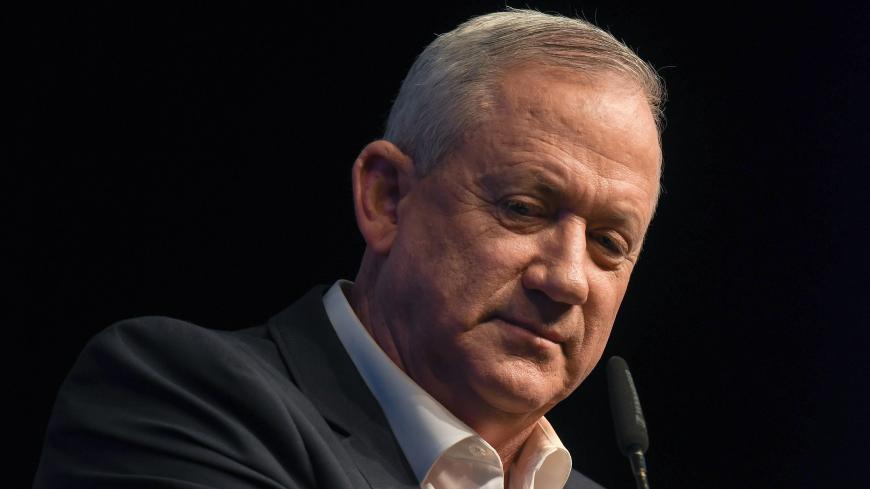 The bloody war of attrition between the two Benjamins, Netanyahu and Gantz, lasted more than a year, pitting their respective parties, the Likud and Blue and White, representing the two halves of the Israeli electorate, against each other. Their all-out war, spanning three tense election campaigns, was waged on the streets and in homes, in halls and stadiums, in the political arena and cyberspace.

The war turned particularly nerve-racking after the March 2 elections for the 23rd Knesset. The pugilists were exhausted. Israel had already been drawn into the coronavirus crisis while Netanyahu and Gantz clinched on the ropes, praying for a bell to save them. At 3:30 pm on March 26, Gantz blinked first and agreed to a power-sharing government with Netanyahu. He decided to cut his losses and accept the best terms he could wring from him, obtaining a firm date to replace Netanyahu as prime minister: October 2021, just around the corner.

The problem now, however, is that no one has managed to turn this “corner” at which Netanyahu is supposed to cede the chair. The political corpses of the politicians who engaged Netanyahu in various agreements are strewn throughout the annals of recent Israeli history, among them Shaul Mofaz (Kadima), Tzipi Livni (Hatenua) and Isaac Herzog (Zionist Camp). Replacing Netanyahu is what Gantz wanted for starters, but he will wait 18 months in prayer, hoping against hope that he can thwart Netanyahu’s every attempt to scuttle their agreement.

Gantz’s decision was a tough one. He dismantled his baby, Blue and White, slammed the door in the faces of his partners Yair Lapid and Moshe Ya’alon, and disappointed millions of Israelis who had voted for his patchwork alliance in the hope of getting rid of Netanyahu. He has now taken a dangerous gamble, which will culminate in either a promotion or a demotion.

Hundreds of thousands of Israelis will spend the coming days mourning the dream they had nurtured with Gantz. They feel he used them; instead of beating Netanyahu, he is now joining him. None of them is looking ahead to the expiry date that will be stamped on Netanyahu’s forehead. No one truly believes that that time will come. Indeed, this will be Gantz’s real test.

Blue and White, formed in haste a little over a year ago, brought together an eclectic group of politicians and ideologues spanning the spectrum from left to moderate right. After a dizzying meteoric rise, it crashed on March 26 in the Knesset plenary, ending in a whimper rather than a bang, with two contradictory forces at play behind the scenes.

The veteran and wily politician Aryeh Deri, eternal leader of the ultra-Orthodox Shas and Netanyahu ally, joined forces with the popular former military chief of staff Gabi Ashkenazi, the power behind Gantz, to conduct secret negotiations between the two Benjamins. Facing off with them were two of Netanyahu’s most fervent haters, the anti-clerical centrist Lapid (Blue and White) and the anti-clerical hard-liner Avigdor Liberman (Yisrael Beitenu). The two sought a frontal clash with Netanyahu in implementing a simple plan: to keep up Knesset pressure on him by taking control of its committees by virtue of the slim, 61-seat majority that coalesced around Blue and White after the elections, replacing Speaker Yuli Edelstein (Likud) with Meir Cohen (Blue and White), and then tabling legislation to end Netanyahu’s political career by banning indicted politicians from serving as prime minister.

Lapid and Liberman realized that Gantz's prospects of forming a minority government, an idea raised in view of the political deadlock, were unrealistic given the refusal of Blue and White’s two right-wing standard bearers, Zvi Hauser and Yoaz Hendel, to support a government backed by the Arab parties. Lapid and Liberman still hoped, however, to exert sufficient pressure on Netanyahu in parliament to wrangle the best possible deal on a power-sharing, unity government. Their worst-case scenario involved letting Netanyahu head a minority government for six months, providing him with Knesset support and letting him stew in the coronavirus crisis and pay the price for his prolonged neglect of the health system. Gantz, however, upended their plans midway. He had had enough. There was the state to consider, he argued.

Ashkenazi, whom Gantz replaced as chief of staff in 2011, brought pressure to bear on him. He more or less said, “Benny, the public doesn’t care about the nonsense of petty politics. The economy is tanking, the epidemic is frightening, people are waiting for us. It’s time to make a decision and put a stop to this political merry-go-round.”

Gantz can only offer a dowry of about half of Blue and White’s 33 Knesset seats given that Lapid’s Yesh Atid and Ya’alon’s Telem broke from the alliance and are now warring over who retains the Blue and White brand. Nonetheless, under the deal with Netanyahu, Gantz will still get the same number of ministers in the new government as Netanyahu. In fact, Gantz will be able to appoint almost all his Knesset members to cabinet positions. This is a rare luxury, but will he know what to do with it? Gantz’s party will be given the foreign, defense, economy and communications ministries and the crowning glory, the Ministry of Justice.

The craziness involving the legal system and the rule of law will end, Gantz argued in trying to convince Lapid and Ya’alon to go along with his plan, but they remained adamant. We cannot turn around and violate the two promises made to voters during the campaign, Ya’alon responded, referring to Blue and White’s pledge not to form a government with the support of the Joint List, which fell by the wayside as soon as coalition negotiations began, and the key promise not to join a Netanyahu-led government. The excuse that “there is the state to consider” did not wash with Lapid or Ya’alon or with Liberman, the key figure in the prolonged electoral campaign against Netanyahu.

Gantz has now embarked on the most dangerous leg of his journey to the Prime Minister’s Office. Blue and White has split, the 61-seat anti-Netanyahu bloc that it led has dispersed, but negotiations with Netanyahu are unfinished. For now, all of Netanyahu’s promises are written on ice. What will Gantz do if Netanyahu changes his mind tomorrow and decides to invite Labor leader Amir Peretz and Labor senior Itzik Shmuli to join his government, forgoing the rotation with Gantz and the heavy price he would have to pay to gain the support of Gantz’s shrunken party? Should such a scenario evolve, Gantz will become the biggest joke in Israeli political history.

Nonetheless, Gantz still holds an ace in being elected speaker on March 26 (instead of Cohen). The speaker sets the legislative agenda, so all Gantz has to do to deter Netanyahu from reneging on their deal is to table Liberman's proposed legislation to plug an existing loophole in the law and preclude indicted politicians from forming a government. Thus Gantz can end Netanyahu’s political career in a hurry.

Liberman's proposed law had enjoyed majority support in the Knesset, but with the Gantz-led bloc no longer solid or reliable, no one knows where it now stands. Gantz and Netanyahu are supposed to wrap up their negotiations within 10 days, sign an agreement and establish a unity government. If that happens, Israel’s prolonged political chaos will end, at least for now. Most Israelis are hoping for a speedy completion of the deal. Life, the economic crisis and the coronavirus have taught them to be modest in their aspirations.