The Balad party is not interested in supporting a Gantz-led government, but it knows that voters of the Arab Joint List do not want another Netanyahu-led government, either. 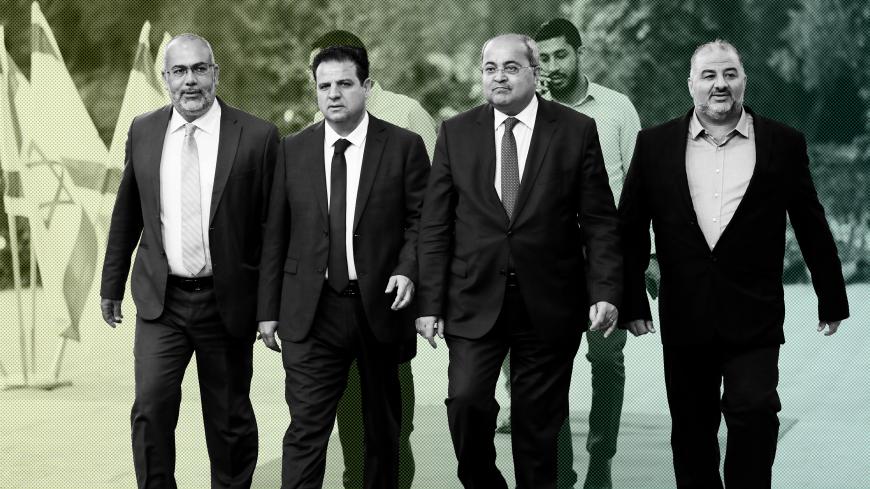 Members of the Joint List arrive to meet Israeli President Reuven Rivlin to begin talks with political parties over who should form a new government, Jerusalem, Sept. 22, 2019. - Menachen Kahana/Pool via REUTERS

The nationalist Arab Balad party is once again an obstacle to the formation of a new Israeli government led by Blue and White party leader Benny Gantz, just as it was after the September 2019 elections. At the time, following the elections to the 22nd Knesset, the three Balad representatives in the Joint List alliance of Arab parties refused to join their colleagues in recommending to President Reuven Rivlin that he task Gantz with forming a government. The situation now is even more complex. None of the Arab voters who sent 15 representatives to the 23rd Knesset on March 2 is likely to blame Balad for refusing to back Gantz in light of his Blue and White’s “Jewish majority” election campaign that ruled out cooperation with the Arab Joint List in order to curry favor with right-wing voters.

For now, Blue and White appears to be going for a minority government if Rivlin gives the nod to Gantz in the coming days. Surprisingly, the first to blink on this issue was Knesset member Moshe Ya’alon of the Blue and White’s leadership quartet. Ya’alon, whose Telem party constitutes the hard-line flank of Blue and White, had persistently opposed a minority government backed by the Joint List. However, according to a March 5 Haaretz report, Ya’alon no longer rules out Joint List support for a centrist government, albeit without Balad. Ya’alon has neither confirmed nor denied the report, but a look at his latest tweets reveals what led to his change of heart. “Bibi [Benjamin Netanyahu], You have dragged the State of Israel to three rounds of elections in order to evade [your criminal corruption trial] and failed. Rather than conceding your defeat, you are using incitement and sedition, spreading lies and calling for civil war,” Ya’alon tweeted on March 7. In another tweet, the former defense minister referred to the March 7 beating of a protester from the Movement for Quality Government by a pro-Netanyahu activist in Jerusalem, alleging he was responsible for “the blood of a protester spilled over the weekend” and urging him to “stop before things spiral out of control.”

Ya’alon fears civil war, and the writing is on the wall, indeed. The threats to Gantz’s life escalated over the past weekend to the extent that the former head of the Shin Bet Yuval Diskin urged the security agency to beef up protection of Gantz to prevent another political assassination.

The campaign to remove Netanyahu from power is just getting started, and only the Joint List, against which Netanyahu repeatedly incites, can provide Blue and White with the Knesset backing needed to do so. With the support of at least 12 Joint List lawmakers and of the seven lawmakers of Avigdor Liberman’s Yisrael Beitenu party, Blue and White could form a minority government comprised of its own 33 elected representatives and the seven lawmakers of the center-left Labor-Gesher-Meretz alliance. Such a government, based on the support of 59 of the 120 Knesset members, would turn Netanyahu into a rank-and-file Likud party Knesset member after which, who knows? According to a March 8 Channel 12 report, Blue and White views such a government as the “gate to unity,” meaning it would leave the door open to other parties from the Netanyahu-led, right-wing, ultra-Orthodox bloc to join.

While Ya’alon took a small step for his Blue and White party, his two Telem colleagues, right-wing Knesset members Zvi Hauser and Yoaz Hendel, are not on board and are unlikely to back Blue and White’s decision. Ya’alon, too, is not in full agreement with an Arab-backed government. He is willing to accept external Arab party support, but without the three Balad lawmakers considered nationalist hard-liners. In other words, he is demanding that Joint List Chair and Hadash Party leader Ayman Odeh, Chair of the Ta’al party Knesset member Ahmad Tibi, and Ra’am party Chair Knesset member Mansour Abbas expel Balad from the ranks of their alliance.

That presents them with a major dilemma. On the one hand, the heads of the Joint List are willing to forgive Gantz for being dragged along by Netanyahu’s anti-Arab incitement, as long as they can fulfill their voters’ desire to “kick out” the prime minister. On the other hand, the price that Blue and White is demanding is unreasonable. Balad is an integral part of the four-party Joint List, and even if Blue and White is seeking to bypass it, the solution will only be found in direct dialogue with the Joint List.

“They shouldn’t think they can dismantle the Joint List and tell us who is legitimate and who is not,” Balad Chair Mtanes Shehadeh tells Al-Monitor. The four faction leaders of the Joint List have decided to convey to Blue and White that there is no such thing as “without Balad” and to demand that it recant the “incitement and talk against Balad,’’ he says. “So far, Blue and White has not asked to negotiate with the Joint List and has not asked us to recommend Gantz to the president,” Shehadeh adds.

According to Shehadeh, following the September elections, the Joint List wanted to recommend Gantz in order to achieve some of its goals. “This time, there is no such climate,” he says, “unless certain conditions are met.” Asked whether it would be realistic to expect Balad to support a minority government alongside Liberman, the archenemy of all Arab lawmakers, he said, “I don’t think that is possible, but it cannot be ruled out. This is supposed to be a kick-out-Netanyahu government.”

Knesset member Shehadeh realizes that in order to form such a government, Gantz needs more lawmakers recommending him to Rivlin than the 58 Netanyahu already has, and therein lies Balad’s dilemma. “The issue is unresolved. Let us see how contacts between the Joint List and Blue and White shape up. We will not recommend. True, our voters do not want Netanyahu and nor do we. We do not have answers to all the scenarios; we will make a decision this week.”

Meanwhile, the Joint List is sending Gantz clear signals: Talk to us, because we have a few demands that you will have to accept on civil and diplomatic issues before we recommend you to the president. And when Blue and White reaches out, says the Joint List, it will have to do so openly and publicly after the humiliating campaign it put them through in the recent round of elections.