Israeli-Arab lawmakers could bring an end to the Netanyahu era

Recently elected lawmakers know their public won’t forgive them if they don’t put an end to Prime Minister Benjamin Netanyahu’s rule and its incitements. 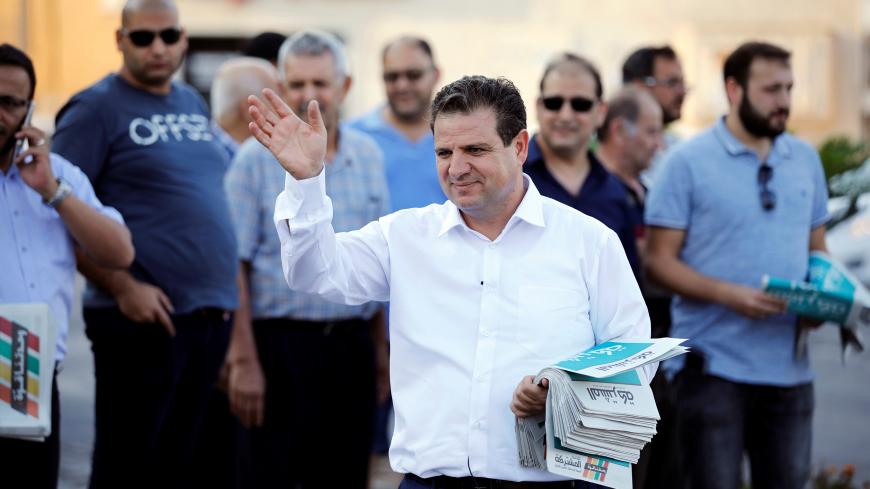 Ayman Odeh, leader of the Joint List, gestures as he hands out pamphlets during an election campaign event, Tira, Israel, Sept. 5, 2019. - REUTERS/Amir Cohen

On Oct. 23, while President Reuven Rivlin was officially tasking Blue and White leader Benny Gantz with forming Israel’s next government, the heads of the Joint List — a unified slate of predominantly Arab parties — were meeting to discuss a unified approach to possible support for such a government. Head of the Joint List Ayman Odeh and Knesset member Ahmad Tibi, respectively the chairs of the Hadash and Ta’al parties, which are the two major parties that form the Joint List alliance, understand their voters want an end to the Netanyahu era and the only option is an alternative government — despite its drawbacks.

They and their constituents have not forgotten that Gantz’s campaign prior to the April elections was launched with a video clip featuring the former head of the Israel Defense Forces alongside a body count of the Palestinians killed under his command in the 2014 war with Gaza. Yet Odeh and Tibi are still willing to support a government with him at the helm if he can send Netanyahu home and end his incessant incitement against Israel’s 21% Arab minority.

“In 1993, there was the Rabin government. For us, relatively speaking, it was the best government, in which we were in the blocking bloc," Odeh said in an Oct. 22 interview with Channel 13 News, referring to the Arab parties’ support that allowed late Prime Minister Yitzhak Rabin to form a minority government and overcome the right-wing political bloc. "If Gantz goes in Rabin's way, I would be honored to follow the path of Tufik Ziad, who was the chairman of the blocking bloc." Rabin was the only Israeli prime minister to date to obtain the backing of the country’s Arab parties.

Tibi, too, held out the option of Joint List support when asked about it in an Oct. 22 interview on Kan News. "Support for the government from outside the coalition — just as it was in the '90s — could be taken into deep consideration by the Joint List" if it means getting rid of Netanyahu, Tibi said.

Given the current political deadlock, external support for a Gantz-led minority government — meaning one that does not enjoy a 61-seat majority in the 120-seat Knesset — is the most realistic option for Odeh and Tibi. Joining a Gantz-led Knesset coalition of which their nemesis, Yisrael Beitenu head Avigdor Liberman, is a member would be a nonstarter, and for all four Joint List parties to join a government led by Gantz’s Blue and White party is inconceivable. These are the immutable facts Gantz faces as he tries to pull together a government.

Tibi has been holding talks for several months with Knesset member Ofer Shelah of Gantz’s Blue and White party in order to convey messages back and forth and to coordinate expectations. They have discussed all possible options for the Joint List’s support — for example, support for a minority government comprised of the left-wing Democratic Camp and the Labor-Gesher party, giving Gantz 44 Knesset seats. With the support of the 13 Joint List lawmakers, Gantz’s government could be sworn in with 57 ayes and 55 nays, with Liberman’s eight-member Yisrael Beitenu faction abstaining due to its insistence on only backing a unity government comprised of Blue and White and Netanyahu’s Likud.

However, this is the crux of the problem. The three Joint List Knesset members who represent the Balad party, which rejects the existence of Israel as solely a Jewish state, have already refused to support a Blue and White government. After the Sept. 17 elections, when the Joint List made its historic decision to recommend to Rivlin that Gantz form the next government, the three Balad lawmakers demanded their names be removed from the recommendation. If they continue to hold out, Gantz will not have even sufficient votes for a minority government since by law he must have more support than his opponents.

After getting the nod from Rivlin, Gantz called his potential partners to set up meetings. The heads of Netanyahu’s two ultra-Orthodox partners, Knesset members Moshe Gafni and Yaakov Litzman of Yahadut HaTorah and Aryeh Deri of the Shas Party, refused to meet with him, saying Likud was the party conducting negotiations on their behalf. In other words, don’t count on us for your salvation. Gantz then called three of the four constituent parties of the Joint List: Knesset members Odeh and Tibi and Knesset member Mansour Abbas of the Ra'am party. He did not call Balad leader Mtanes Shihadeh.

Tibi and Shelah came up with various ideas in recent days on how to overcome the “Balad obstacle” and ensure the Arab List’s full backing of Gantz.

In an interview with Al-Monitor, Shihadeh admitted that he holds the keys to the formation of a Gantz government and that he and his two Balad colleagues — Knesset members Hiba Yazbek and Samy Abu Shahadeh — are a deciding factor, just like their hawkish enemy Avigdor Liberman. Their votes will determine whether the first Gantz government can be established. Liberman and Shihadeh will not sit with each other in the same government; without them, Gantz has virtually no chance of cobbling together a government.

“It is not a question of abstaining. Anyone who says it is cannot count. For Gantz to succeed in forming a government, he needs Balad,” Shihadeh stated with unhidden satisfaction.

Shihadeh did not deny that his Joint List colleagues were exerting pressure on him. He is very aware of the fact that he, the head of the most maligned party in the Knesset, holds the power to enable the formation of a center-left government and thus realize the hope of ending the Netanyahu era. As far as he is concerned, the best thing now is to wait. He may not even have to make any decision and things may “work themselves out.” Perhaps the Likud will agree to a unity government with Blue and White but without its right-wing and ultra-Orthodox partners? Maybe Liberman will be the one who drags Israelis to a third election within less than a year? All options are open, for now.

I asked Shihadeh whether he is aware of the fact that most Arab voters would like to see Gantz form a government and that Balad’s objections could result in deep divisions within the Joint List at best or in its dismantling at worst. “Knesset members Ofer Shelah and Ahmad Tibi have been talking for months, and they know our position,” he said, adding, “We are still not up against the wall, and when the time comes, the party’s institutions will convene and decide.”

If Shihadeh gives in to pressure, Balad voters might regard him as disloyal to the trust placed in him as the new party chair. If he stands firm, the Joint List’s electoral achievement of 13 Knesset seats, making it the third-largest Knesset faction, will fizzle out and he might be blamed for leading voters to third elections. He will also be considered responsible for failure to unseat the right-wing government. Many Arab citizens who have experienced Netanyahu’s unfettered incitement for over a decade may not forgive him. He knows this and therefore reiterates to Al-Monitor: “We will have to decide once the picture is clearer.”

Meanwhile, Odeh and Tibi have a plan. Prior to the elections, they presented Blue and White with a list of demands as a condition for their support of a Gantz government. The demands include revoking the controversial Nationality Law, canceling preferential terms for army veterans in public sector jobs, allocation of budgets for the Arab sector and improvement of its infrastructure, construction permits in Arab communities and more. Only after the future coalition partners formulate and publish their plans to improve the civil, economic and social standing of the country’s Arab citizens will the real pressure on Balad begin. Will Knesset member Shihadeh be able to hold out? Probably not.