The Blue and White party believes the land swap idea in the deal of the century is included in Donald Trump's peace plan for one reason: to trap Benny Gantz and create a rift between him and Israeli-Arab voters. 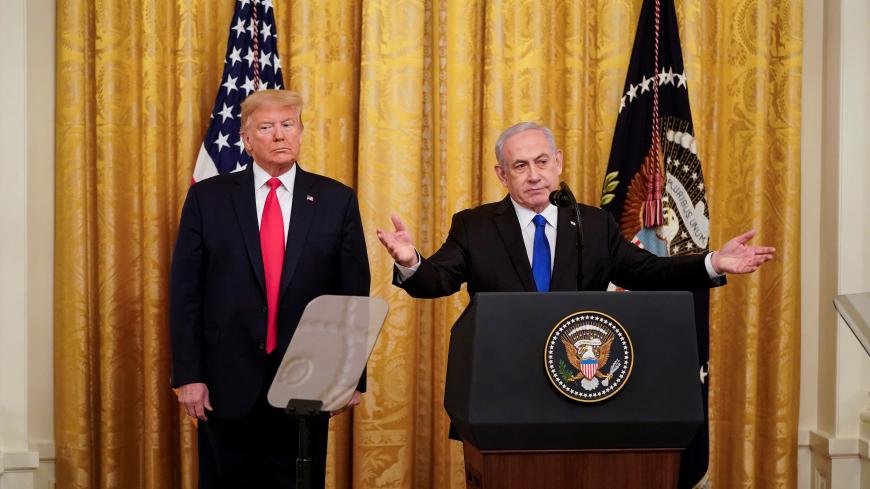 A clause somewhat buried in President Donald Trump’s deal of the century for Israeli-Palestinian peace, “lifted” from an obscure peace plan presented 15 years ago by Yisrael Beitenu leader Avigdor Liberman, has morphed into a time bomb or land mine waiting patiently for someone to step on it. Senior officials in the opposition Blue and White party tell Al-Monitor that this clause was deliberately inserted into the plan to drive a wedge within the center-left political camp, sabotage a possible political alliance between Blue and White and the Arab Joint List, and perhaps confront political hawk Liberman, the originator of the idea, with a dilemma.

Section four of the “Peace to Prosperity” plan, titled “Borders,” stipulates that “Land swaps provided by the State of Israel could include both populated and unpopulated areas.” It includes a list of Arab Israeli communities in Wadi Ara and the so-called “triangle” region, areas abutting the West Bank and inhabited by hundreds of thousands of Israel’s Arab citizens, as potential lands for a swap between Israel and a future Palestinian state. Trump’s plan further states that these areas were supposed to be handed over to the Kingdom of Jordan under terms of the 1949 Armistice Agreement following Israel’s War of Independence. They ended up under Israeli control due to security considerations that, according to the Trump blueprint, are no longer relevant. The presidential “vision contemplates the possibility, subject to agreement of the parties that the borders of Israel will be redrawn such that the Triangle Communities become part of the State of Palestine,” adding that “these communities … largely self-identify as Palestinian.”

Liberman holds the copyright for the populated land swap idea, which, as previously mentioned, he came up with in November 2004. The idea, laid out in a peace plan he presented, called for swapping territory with the Palestinians so that Israel would annex the major settlement blocs in the West Bank, and in exchange, the Palestinian state would get Israeli lands largely inhabited by Israeli Arab citizens who supposedly identify themselves as “Palestinians.” The point was also to reduce the proportion of the Palestinian minority in Israel’s population and remove most Israeli Jewish settlers from the future Palestinian state. Liberman never received any international credit for this combustible idea. On the contrary, he faced sweeping opposition wherever he turned. Still, the idea became the worst nightmare of Israel’s Arab citizens, who currently constitute 21% of the population and feel the Jewish State is plotting to somehow get rid of them, whether by transferring them from their homes (as per the ideology of the late minister Rehavam Ze’evi) or exchanging lands densely populated by Israeli Arab citizens.

A Blue and White source told Al-Monitor this week on condition of anonymity that “US Ambassador David Friedman was the one who planted this explosive section in the deal of the century at Benjamin Netanyahu’s bidding.” According to this source, the idea was simple: Drive a wedge between Blue and White leader Benny Gantz and the Arab Joint List. It worked. Gantz was caught in a bind. On the one hand, he had expressed support for the Trump plan in order not to be sidelined and risk losing moderate right-wing voters. On the other hand, in doing so he risked the secret, fragile and problematic alliance he has forged with the Joint List, the predominantly Arab unified list that represents most Israeli Arab voters and 10 of whose 13 Knesset members recommended to President Reuven Rivlin after the September 2019 elections that he task Gantz with forming Israel’s next government.

The US Embassy denied the claim about Friedman’s actions. “While we will not comment on diplomatic discussions, the assertion is false,” it said in response to Al-Monitor’s request for comment.

How did Gantz resolve his entanglement? He did not, really. The Arab lawmakers went to him as soon as the Trump plan was unveiled on Jan. 28 and demanded that he reject out of hand the clause relating to land swaps. Gantz hemmed and hawed. Members of the Joint List were furious to the point that their leader, Knesset member Ayman Odeh, announced that he and his colleagues would not support any government that includes Liberman. When Gantz eventually gave in and said on Feb. 11 that Blue and White would oppose the proposed territorial exchange, it was too little, too late, and was perceived as capitulation to the Arab lawmakers’ threats.

Meanwhile, Netanyahu latched on to the idea with justified enthusiasm. The current Likud party campaign focuses on the fact that Gantz cannot garner sufficient votes to form a government without the support of the Joint List, which is the third largest faction in the Knesset. With the Joint List announcing it was pulling its support over the land swap clause, he has lost his final chance of unseating Netanyahu. The prime minister is trying to block the wind swelling Blue and White’s sails and do to Gantz what Gantz did to him in the two previous election campaigns in 2019, portraying him as lacking sufficient support to form a coalition government and thus dampen the enthusiasm of Blue and White’s voters.

As previously detailed here, one of Gantz’s victory plans relies on gaining a “Jewish majority,” meaning a bloc of 54 Knesset members (of the centrist Blue and White, right-wing Yisrael Beitenu and center-left Labor-Gesher-Meretz), while siphoning off two Knesset seats from Netanyahu’s bloc of right-wing and ultra-Orthodox parties, taking it down to 53 seats. That would free a Gantz-led government of the need for the Arab Joint List’s support (it would only need to ensure that the Joint List abstains in the Knesset vote approving a new government). That, in turn, would enable Liberman to come on board without being perceived as joining a government supported by the Arabs. The land swap clause in the Trump plan undermines this battle plan, turns Blue and White and the Joint List against each other (suffice it for one Arab Knesset member to vote against such a minority government to preclude its formation), and confronts Liberman with a dilemma.

Blue and White is not overly bothered by this scenario. For now, its campaign is focusing on one message only: a unity government with the Likud but without Netanyahu. “We don’t want to form a minority government (one that does not have the support of a 61-seat Knesset majority). The people of Israel need a unity government and the state needs a unity government, and that is where we are heading,” a source on the right-wing flank of the centrist party told Al-Monitor on condition of anonymity. “We are not trying to form a government using subterfuge,” said the source. This move is a temporary victory for the right-wing flank of Blue and White, which is trying its very best to shake off the bear hug of the Arab Joint List in order to poach two or three Knesset seats from the right and open up a significant lead ahead of Netanyahu. Such a lead would pull the rug out from under Netanyahu’s demand that he serves first in a power-sharing rotation arrangement with Gantz and would end the tortured death throes of the Netanyahu era.