Going by the latest poll results, Yisrael Beitenu head Avigdor Liberman will be the deciding factor in the Sept. 17 elections and will determine the identity of Israel’s next leader. 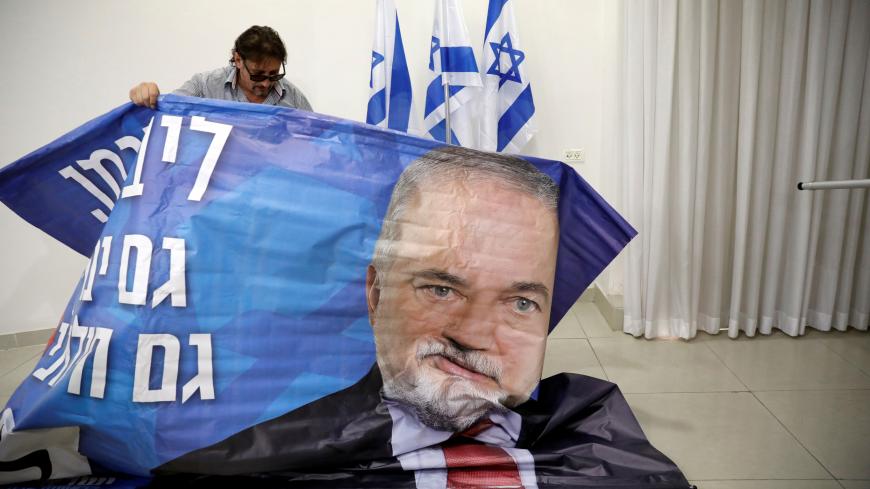 If results of the upcoming Sept. 17 elections indeed resemble current public opinion polls, then Yisrael Beitenu head Avigdor Liberman will be the kingmaker who determines the identity of Israel’s next prime minister and is able to tip the balance in one direction or the other.

In the April elections to the 21st Knesset, Prime Minister Benjamin Netanyahu’s Likud party, along with the ultra-Orthodox and religious right-wing parties, won 60 Knesset seats — one less than the majority required to form a governing coalition. When Liberman refused to support him with his five Knesset seats, Netanyahu made last-ditch efforts to mobilize renegades from the political center-left. These included Gadi Yevarkan from Blue and White (originally from the Likud) and Omer Yankelevich, an ultra-Orthodox woman also representing Blue and White. When that failed, Netanyahu was so desperate that he turned to then-Labor Chair Avi Gabbay on the left side of the political map (Labor refused to join him).

As we know, Netanyahu failed in his efforts, leading to the disbanding of the newly elected Knesset on May 29 and the scheduling of new elections for Sept. 17. However, polls conducted last week indicate that voters will not give Netanyahu sufficient backing to form a government without Liberman this time around either. The average of the latest polls, as calculated by the financial daily Globes, gives the Likud, right-wing and ultra-Orthodox bloc (the same makeup as the outgoing government) only 56 seats compared with 47 for the center-left and 11 for the Joint Arab List. Prospects of Arab lawmakers joining any government are slim to none, but even if they support a center-left government in the Knesset without actually joining it, this bloc will not have sufficient backing to form a coalition government either. The various moves under discussion to unite parties on the right and the left to strengthen their appeal do not change this projection in any substantive way.

The polls project an average of eight seats for Liberman’s party, meaning he will have it in his power to crown the next prime minister — whether Netanyahu or rival Blue and White Chair Benny Gantz. This is bad news for Netanyahu. His relationship with Liberman is at an unprecedented nadir, and in any case, Liberman insists he will not enable Netanyahu to form another government with the ultra-Orthodox.

Liberman has been ratcheting up his pronouncements on issues of religion and state in a bid to attract right-wing voters who dislike Netanyahu’s alliance with the ultra-Orthodox. For example, he recently tweeted that “allowing the separation of men and women (at public events) is another step on the road to turning Israel into a halachic state. Yisrael Beitenu will not support this and will fight with all its might to prevent it.” So as not to scare off voters of the Likud and other right-wing parties, many of whom are traditionalists and certainly not anti-clerical, Liberman differentiates himself from Yair Lapid, the co-chair of Blue and White who champions secularism anti-clericalism, saying he favors Jewish tradition but opposes religious coercion.

Liberman also claims at every opportunity that he represents the true liberal Likud as envisioned by its spiritual forefather, Ze’ev Jabotinsky. In the name of Jabotinsky’s statesmanlike dignity, Liberman lashed out last week at the radicalization of religious Zionism, which he argued encourages soldiers to disobey commanders’ orders and heed their rabbis instead. “The religious preparatory programs have produced some of the bravest fighters in combat. … Today the preparatory programs are developing into phalanges,” Liberman said at the July 2 annual Herzliya policy conference. His comments drew extensive fire from his potential coalition partner Benny Gantz. In view of the uproar, Liberman claimed he had been referring only to the influence exerted by certain rabbis on religious Zionist soldiers who were the salt of the earth but must be kept away from the likes of ultra-right, religious lawmaker Bezalel Smotrich, who advocates a halachic state.

What does Liberman intend to do with the power to crown the country’s next prime minister if voters hand it to him in September? A clear hint can be found on his Facebook page where he wrote on July 4, “Yisrael Beitenu, as the only true right-wing party in the Knesset, will adhere to the national interests of the state and not to personal or sectoral interests. That is why we will demand a broad-based government, made up of Yisrael Beitenu, the Likud, and Blue and White, without Smotrich, without Deri and without Litzman.” The last two — Aryeh Deri and Yaakov Litzman — are ultra-Orthodox lawmakers and government ministers.

And how will such a government be constituted? Liberman has already announced that after the elections he would impose a national unity government on the two major parties and recommend to President Reuven Rivlin that he task the head of the party with the most votes with forming it.

In an interview with Al-Monitor, the No. 2 on Yisrael Beitenu’s Knesset list, Knesset member Oded Forer, said the challenges facing the state — a massive budgetary shortfall and tensions with Gaza — require the formation of a right-wing government without the ultra-Orthodox. “Representatives of the central bloc — the Likud, Blue and White, and Yisrael Beitenu — are the ones who should determine policy,” Forer said.

Blue and White is essentially a centrist party, Forer said, adding that he has already partnered with some of its left-leaning members in a previous government and they can be allies on so-called “civilian” issues. While Liberman has ruled out a partnership with the ultra-Orthodox and with Smotrich’s National Union in a future national unity government, Forer left the door open. After a “civilian unity coalition” (a government refraining from religious dictates) is formed, he says, other parties can join as long as they accept its guidelines. “They will not be able to blackmail us to get budgets for their sector or religious legislation,” he emphasized, adding, “A civilian coalition will make Israel great again. This will be Yisrael Beitenu’s election slogan, paraphrasing [US President] Donald Trump’s.”

Liberman’s problem will be in getting Blue and White to join a Netanyahu-led government, which the party leaders have already ruled out. Forer says that if his party holds the balance of power, it will be able to force Blue and White to sit together with the Likud in government. “No one wants another round of elections,” he said. “Neither party will want the public to accuse them of letting personal considerations get in the way of what could be a dream government. This will be a government under the control of the sane center and without extortion by radical and sectoral parties,” Liberman added.

In the past, the National Religious Party and ultra-Orthodox parties such as Agudat Yisrael, both now defunct, had a decisive say in the identity of the country’s prime minister. The tables have turned nowadays, and a standard-bearer of secularism may determine who will lead Israel in the coming years.