By blurring the lines between right and left and by declaring that he will only join a national unity government, Chairman of Yisrael Beitenu Avigdor Liberman has become the most interesting politician of the current election campaign. 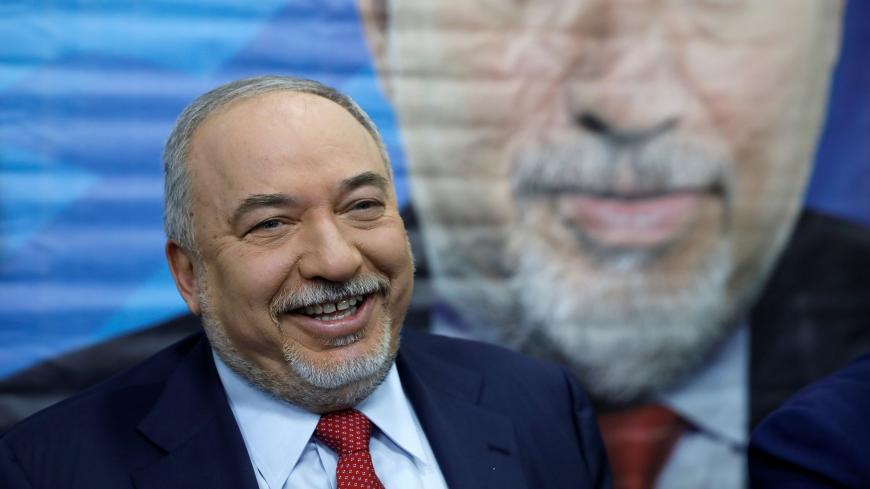 When the chairman of Yisrael Beitenu, Knesset member Avigdor Liberman, decided to sign a surplus vote agreement with the Blue and White party, he certainly took into account that Prime Minister Benjamin Netanyahu would use it as a cudgel against him. And in fact, it was just 10 minutes after the official announcement of the agreement Aug. 20 that the Likud attacked Liberman for having joined forces with the left.

For many long weeks now, all of Netanyahu’s efforts to chip away at Liberman’s Russian votes have been in vain. Polls show that Yisrael Beitenu is as steady as a rock. Netanyahu even took the time to pay an official visit to Ukraine Aug. 18, with a wink at Russian-speaking voters in Israel. The announcement of the surplus vote agreement between Liberman and Blue and White caught him in Kyiv. In a special video clip shot in his hotel room, Netanyahu attacked Liberman in response to this new development, saying, “It pains me to say this, but as of today it is official. Liberman is transferring votes from the right to a left-wing government.”

Liberman wasn’t upset at all. He seemed to revel in this opportunity to fire back at Netanyahu. In a video of his own, he claimed, “Netanyahu is feeling the pressure. … The surplus agreement between Yisrael Beitenu and the Blue and White party has no political significance. It is a technical agreement only.”

Liberman is turning out to be the big trend of the 2019 election. He reinvented himself with his aggressive campaign against religious coercion by the ultra-Orthodox, so that most polls now show him doubling his parliamentary strength, from five seats in the April election to an anticipated 10 seats in September. And he doesn’t plan on stopping there either. He has already identified a pool of voters in the center-left, and particularly in the Blue and White party, that he could win over to himself. These are voters for whom the fight against religious coercion is a top priority. They are certainly impressed by his strident messages. Furthermore, Liberman is challenging Netanyahu himself, and these voters see him as the person who could ultimately bring the prime minister down, after Blue and White failed to do so in April. In other words, Liberman is offering Blue and White voters two agendas on a single ballot.

Liberman likes to say that the seats added to his party come from the Likud, but it looks as if most of his growth really comes from Blue and White voters, and more specifically, Yesh Atid voters. That party, founded by Yair Lapid, once had the fight over the conscription of ultra-Orthodox men as the first item on its agenda, but it was toned down somewhat once Lapid joined the Blue and White party. Liberman stepped in to fill the vacuum, and he was very effective at it. He recognized the potential of this issue and simply adopted Lapid’s agenda.

The opening salvo of the current campaign was his refusal to reach a compromise with the ultra-Orthodox over the Conscription Law. This resulted in the quick decision to dissolve the Knesset and hold new elections. Liberman benefited from Kulanu center supporters, who abandoned Finance Minister Moshe Kahlon after he rejoined the Likud, and even Labor-Gesher voters. Right-wing voters did not flock to him, because he was regarded as the reason there was no right-wing government led by Netanyahu after the April election. By signing a voter surplus agreement with Blue and White, Liberman is signaling to potential voters in Blue and White that they have no reason to worry that he will join a new Netanyahu coalition, and that in any event their votes will not go to right-wing parties as a result of some voter surplus agreement. That has a clear psychological effect, and it boosts Liberman’s image.

As if that was not enough, on the evening of Aug. 21, Liberman turned up the rhetoric of his anti-ultra-Orthodox message, when his party announced that it would insist on installing cameras in polling stations in the religious sector to prevent voter fraud. For three decades, Liberman was considered a staunch ally of the ultra-Orthodox political class. Now, he just crossed all the lines.

Liberman is a calculating politician. He reads polls as well as Netanyahu and realizes that the chances of him winning votes from the right are minimal. But he also seems to have concluded that even if he loses votes from the right for flirting with the Blue and White party, he can earn those votes back from the center-left. It is not just the hardcore opponents of religious coercion either, even though they certainly see him as the person who will fulfill their deepest desires. He also appeals to Blue and White voters, who are disappointed by the infighting among the party’s leadership and by Benny Gantz’s feeble efforts to restore some semblance of order in the chaos. They could decide that Liberman is a “strong leader,” and convince themselves that he can actually bring about Netanyahu’s downfall.

The path taken by the chairman of Yisrael Beitenu since the April election is both surprising and fascinating. He is undoubtedly the most intriguing political player right now. For one, he is trying to shatter the traditional division of parties into right- and left-wing blocs. Furthermore, his message is clear and lucid. He is not stammering at all. Instead, he simply reiterates, "We will only support a broad-based liberal Jewish government, without the ultra-Orthodox and without the messianists."

The big question is whether Liberman’s ideology really underwent some deep-seated shift, or if this is all part of some cynical move on his part. After all, he is part of the right’s own flesh and blood, a settler from Nokdim, who once led a political campaign against Arab Knesset members, calling them traitors. And then there is one more possibility: This could all be a personal vendetta against Netanyahu.

Liberman has always been a riddle in the Israeli political scene. He has been coming and going for years, joining and leaving governments with no advance warning. Nevertheless, this time it looks like he outdid himself.