Israeli-Russian vote decisive for next elections

Prime Minister Benjamin Netanyahu needs at least one Knesset seat from the Israeli-Russian population to assemble a majority coalition after the September elections. 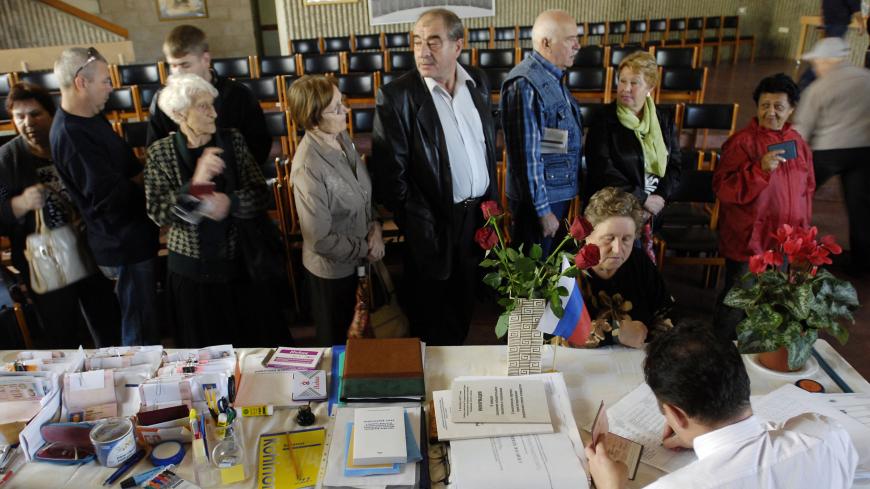 Israelis who immigrated from Russia wait in line at a polling station in the coastal city of Ashkelon, Dec. 2, 2007. - REUTERS/Amir Cohen

With three months to go until Israel heads to the polls to elect the 22nd Knesset on Sept. 17, the parties have barely started their campaigns. Still, the knives are already drawn. Three days before the Knesset dissolved itself on May 27, Prime Minister Benjamin Netanyahu concluded that Avigdor Liberman has no plans to join his next government, so he sent a message to the rest of his Likud faction: “It’s free-fire season on Liberman.”

In the last election campaign, the Likud kept a safe distance from Yisrael Beitenu’s territory. This time, the situation is very different. About a week ago, Netanyahu appointed Likud Central Committee member Attorney Ariel Bulshtein as his “special adviser on Russian immigrants.” Liberman derided the appointment, claiming that “Netanyahu is in a state of hysteria from all the pressure.” Liberman also noted that polls show his party growing to as many as 10 seats, compared with the five garnered at the April elections.

In response, the Likud released statements and posted on social media in the Russian language. The first person to launch this “Russian” trend was actually the prime minister’s son, Yair Netanyahu. On May 29, he tweeted in Russian: “My brothers from the Soviet Union, Liberman is spitting on you. The Likud is your home.” It now looks like this was just the beginning.

Coalition coordinator Miki Zohar of the Likud told Al-Monitor that the Likud’s election campaign in the Russian sector will start soon, and that it is quite possible a prominent Russian-speaking Israeli will join the party. “Immigrants who arrived from the former Soviet bloc countries make up a wise, intelligent community,” he said. “They know that what really matters is who becomes prime minister, and not some party or other. Liberman moved to the left while we are working to make sure that Benjamin Netanyahu will be prime minister. He is very popular among Russian speakers, so I am sure that they will make the right decision and come over to us. Our party already has quite a few representatives of this community, such as [Knesset speaker] Yuli Edelstein and [Minister] Ze’ev Elkin, and it is possible that one or even two more will join us.”

One possible candidate to join the Likud is former Knesset member Tali Ploskov, who served in the 20th Knesset as part of Moshe Kahlon’s Kulanu party.

Eli Hazan, director of the Likud’s Department of External Affairs, believes that the party's Russian campaign, which is scheduled to start soon, will succeed. “The prime minister is starting to post in Russian, he appointed Attorney Bulshtein as his adviser, and we plan to be more active in the municipalities. It’s important to remember that the Likud has done a lot for these immigrants, from the days of [late Prime Minister] Menachem Begin until now, and our relationship with them feels natural and good. We have a lot in common,” Hazan told Al-Monitor.

Meanwhile, Yisrael Beitenu is keeping an even temper and showing self-confidence. On June 17, the party’s Russian-language website featured a poll taken by the Newsru website after Liberman announced that, after the upcoming election, his party will force the formation of a unity government without the ultra-Orthodox. It showed that support for the party rose from 48% last month to 58% today.

At the same time, the party is well aware that the main battle with the Likud hasn’t even started yet. Former Yisrael Beitenu Knesset member Robert Ilatov told Al-Monitor that it will be a bloody battle. “Netanyahu needs at least one seat from Liberman,” he said, “and he will work hard to get it. I expect that this will not be an easy fight. Netanyahu is certainly popular in the Russian sector, and while it will be hard for him to grab more than one of those seats, one is all he really needs now.”

Over the last few days, the Likud has stated repeatedly that Liberman’s call on June 16 to form a national unity government made up of the Likud and the Blue and White party is clear proof that he is a “leftist.” The claim, which Liberman rejects wholeheartedly, is being spread across social media by numerous Facebook users. Their main target is pages belonging to Liberman and Yisrael Beitenu. One example is a post by a user named Yigal Sachor, whose own page consists entirely of pro-Likud posts. He wrote on Yisrael Beitenu’s page, “It all became clear once Liberman announced his intent to form a government with the Blue and White party. The choice is either a left-wing, [center-left] Gantz-Liberman government or a right-wing, Netanyahu-[far-right] Ben-Gvir government. Liberman showed that he is deeply entrenched in the left and that he lacks an ideological spine. Today he embraces [Arab Knesset member] Ahmad Tibi, and tomorrow he’ll oppose [Arab Knesset member] Ayman Odeh. Then, two days from now, he’ll partner with the ultra-Orthodox. He worked together with [ultra-Orthodox Knesset member] Aryeh Deri to make Moshe Leon mayor of Jerusalem, and he worked against the Russian-speakers’ candidate Ze’ev Elkin.” This seems to be the line that the Likud will take when attacking Liberman, up until the next election.

While the Likud and Yisrael Beitenu fight over the “Russian vote,” the opposition, particularly the Blue and White party, has had nothing to say about this yet. Not one of its leaders has announced that the party will try to attract Russian-speaking voters. A source involved in the Blue and White party told Al-Monitor that right now, the campaign to draw Russian voters is focused mainly on Knesset member Yair Lapid and Russian-speaking Knesset member Yoel Razvozov. Then again, the last post to the party’s Russian-language webpage was made on May 9.

The other opposition parties — i.e., Meretz and the Labor party — are too busy with their own primaries to jump into the fray. Besides, they will have a hard time investing significant sums in a Russian-language campaign, if only because of their size, as election budgets are allocated according to the number of Knesset seats.

The important question is how many Russian-speaking Israelis will actually turn up to vote. The percentage of voters among this sector was never very high. Furthermore, supporters of the Likud and Liberman have been joined by a third group consisting of disenchanted citizens. Rather than voting, they are thinking about spending election day at the beach.