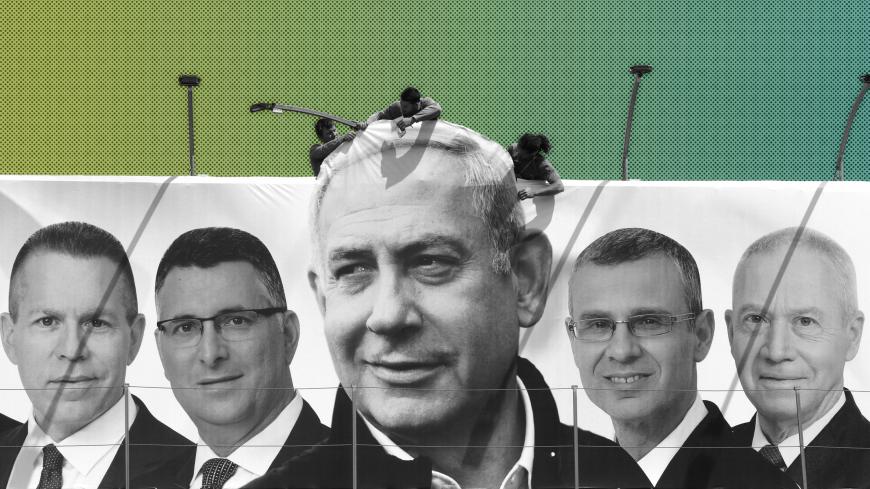 Although there are only two months left until the Sept. 17 election, the campaigns haven’t really started, except for one. As Prime Minister Benjamin Netanyahu promised on that fateful day, when, for the first time in his life, he couldn’t form a government after the May 30 election, the Likud recently started an aggressive Russian-language campaign against the chairman of Yisrael Beitenu, Avigdor Liberman, and his party. Even before that, Netanyahu appointed a special adviser on Israelis from the former Soviet republics to attract Yisrael Beitenu voters and prevent Liberman from being the deciding factor once again. The campaign is happening mostly on social media platforms, Netanyahu’s Facebook page and the Likud’s Russian Facebook page.

The opening shot was heard June 30, when a 28-second video was posted on Netanyahu’s Facebook page, called “How Avigdor Liberman actually votes.”

“For 20 years Liberman and his party have promised its voters civil marriage," the narrator says. "They continue to promise it today.” Then there’s a short clip from an interview with Liberman in Russian on Channel 9: “We will demand civil marriage.” The Facebook video continues: “How has Yisrael Beitenu actually voted?” The answer: no. "Enough empty promises!" it says.

In another short video, in the same format, from July 2, the Likud attacks Liberman’s promises regarding public transportation on the Sabbath — a painful issue for many new immigrants, young and old.  “Liberman promises you public transportation on the Sabbath?" says the narrator. "Let’s see how his party voted on such initiatives." Again, the answer is that the party voted against the initiatives.

The video campaign joins a viral post distributed by private individuals, rather than Likud activists, that tallies Yisrael Beitenu’s votes on the party’s core issues: civil marriage, public transportation on the Sabbath, increasing welfare payments to the elderly and more. The party, which for most of its lifespan had been a member of various coalitions and only rarely served in the opposition, regularly voted against proposed laws that sought to set the right for civil marriage into law, against proposed laws that called to transfer authority to run public transportation on the Sabbath to mayors, and against proposed laws that sought to increase welfare payments for the elderly to the level of the minimum wage. In several cases, the party’s members left the Knesset chamber or abstained. It’s not clear who worked on the presentation and gathered the data, apparently from the Knesset website.

The message of the Likud’s campaign is simple: Yisrael Beitenu has not fulfilled its commitments to its voters, and now it continues to promise them the same old promises. That is, Liberman betrayed his voters. The problem here is that the Likud is presenting a partial or even distorted picture of reality, since the Likud was part of the same coalitions. The Likud’s Knesset members also voted against those same proposed laws that sought to advance civil marriage, public transportation on the Sabbath, easing the conversion process and increasing welfare payments to the elderly.

Will the Likud’s negative campaign be effective and manage to flip Liberman voters? In conversation with Al-Monitor, Zeev Hanin, a professor at Ariel University, said that for now this campaign hasn’t born fruit.

“Arguments such as 'Yevette [Liberman’s Russian first name] sits in the government with the ultra-Orthodox' or 'Yevette voted this way or the other' haven’t worked,” he said. “These are weak arguments that could be easily turned around with the question: Who was then prime minister, and what prevents today’s prime minister from working out the pension issue, with Yisrael Beitenu or without it?"

He added, "Yisrael Beitenu has a hard core of at least three mandates. In April’s election, Yisrael Beitenu got a minimal number of mandates [five] and it’s not likely they’ll receive fewer. The half mandate former member of Knesset Tali Ploskov brought Kulanu [she was formerly with Yisrael Beitenu] now returned to Yisrael Beitenu [Kulanu merged with the Likud]. In addition, there are one to two mandates that swing between the Likud and Yisrael Beitenu.”

In response to the Likud’s barrage of videos, Yisrael Beitenu posted on its Russian-language Facebook page a meme with a photo of Arab Knesset member Ahmad Tibi and a quote from a beloved Russian movie, "Ivan Vasilievich Changes Professions." The caption under the photo says that Netanyahu intends to form a government with the external support of anti-Zionist Arab parties. The post also attacks polls published by the newspaper Israel Hayom, which Liberman calls “Benjamin Netanyahu’s propaganda page.”

Roman Gurevich, a veteran political adviser and owner of a communications firm, believes the negative campaign’s goal is not to get voters to switch sides but actually for them to stay at home. “The negative campaign was intended to make sure [Likud] voters don’t vote for Yisrael Beitenu," he said. "They won’t necessarily switch sides, but they’d stay home. According to the latest polls, Liberman will once again be the deciding factor between the two blocs, and the Likud wants to prevent this.”

Alla Kluchinski, who immigrated to Israel from Moldova in the 1990s, told Al-Monitor that at this stage she hasn’t made up her mind. “I have always voted for the Likud," she said, "but this time it seems I’ll vote for Liberman. I’m not against religion, but its influence on the government’s actions must be reduced.”

On the other hand, Tamara Aranov, who is retired, has already decided. “I have always voted Likud and I’ll continue to vote Likud," she said. "This party has done so much for the country, and despite all of the slander and the dirt I’ll continue to support it.”

Gregory Tamar of Jerusalem intends to vote for Yisrael Beitenu, despite his poor estimation of it. “In Israel’s sectoral reality, the lack of a party for Russian speakers would poorly impact my standing in society,” he told Al-Monitor.

Dmitry Lovchy, who immigrated from Kharkov, Ukraine, in 1989, is aware that Yisrael Beitenu hasn’t fulfilled its previous promises to its voters, but would still vote for it. “Liberman is the only one who unreservedly speaks about religious coercion and pushes for a secular coalition without the ultra-Orthodox,” he said.

Maya Amirov-Leleeva, who immigrated to Israel from Dagestan, said that only the prime minister makes decisions “and not the small parties that are squabbling for mandates, only to once again do nothing for the people. I’m sorry for the people who’ll throw away their votes.”

Itzhak Ben-Dov, who immigrated to Israel from St. Petersburg and today lives in Tel Aviv, supports the Likud for ideological reasonsm not out of loyalty to its leaders. “I’ll vote for the Likud since it’s a secular right-wing liberal party with a firm ideological base,” he said.

“At this stage, as the Likud’s ‘Russian’ campaign just started, it’s hard to estimate its impact on voters,” said Anna Rayva-Barsky, a political writer and analyst at Israel Plus Channel and on Kan Reka Radio. “The Likud is now focusing on issues that interest the hard core of Yisrael Beitenu voters, like pensions, public transportation and civil marriage. Only if they turn to younger voters and come out with a ‘younger’ and more updated campaign, would they be able to draw those votes.”

Rayva-Barsky believes that Liberman is sure of his electoral base and now is trying to brand himself anew to appeal to the general secular Israeli public. As the election date nears, the campaigns will surely tighten up and the battle for the Russian vote will heat up.