The Blue and White party, which posed a real threat to Prime Minister Benjamin Netanyahu in the last election, is now the least of his headaches. 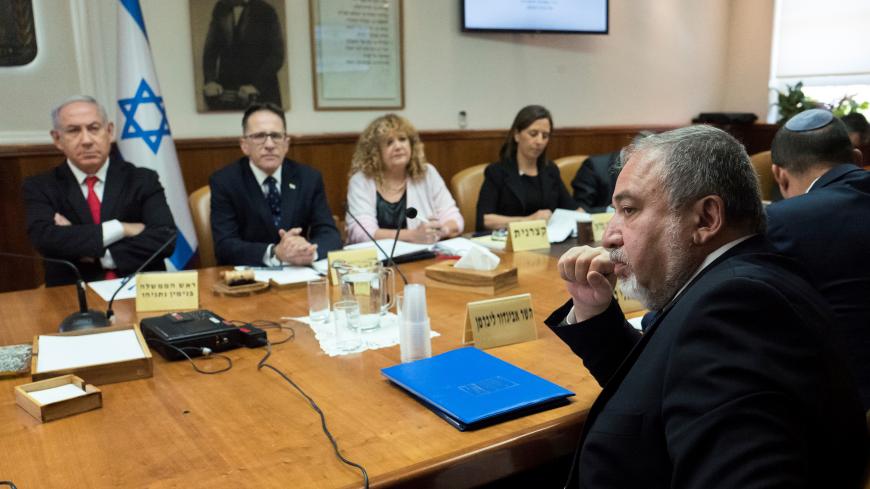 Knesset member Avigdor Liberman announced the night of June 15 that he would force a national unity government on the Likud and the Blue and White party, and that he plans to advise the president to give the task of forming the new government to whichever party is the largest. This turned September’s upcoming election into a head-to-head battle between him and Prime Minister Benjamin Netanyahu.

This is already a very strange election, unlike anything we’ve seen before. Until now, elections always pitted the leaders of the two major parties against each other, with one from the right and the other from the center-left. That’s not the case this time. The prime minister, who heads a party (Likud) with 35 seats, now sees his main rival as being the head of a small party on the right with just five seats (Yisrael Beitenu). Oddly enough, the Blue and White party and its leader, Benny Gantz, do not pose a serious threat, at least as far as Netanyahu is concerned. Maybe it’s because the Blue and White party also needs Liberman if they are to form the next government.

As of now, Netanyahu’s biggest rival is someone on the right rather than someone from the center-left. On one hand, he needs to block Liberman, so he is aiming all his firepower at him. On the other hand, he also has to unite the other right-wing parties around him and come up with a way to ensure that they don’t lose any seats. That’s because Netanyahu knows better than anyone that if he fails to reach the finish line with 61 safe seats from parties on the right and the ultra-Orthodox (a majority coalition), he will get caught in a dizzying tailspin that could cause him to lose his job as prime minister.

According to a source close to the prime minister, Netanyahu believes that Liberman plotted to topple Netanyahu by refusing to join his coalition. The prime minister believes that if he had not dissolved the Knesset, another Knesset member would have received the task of forming a coalition. In such a scenario, that Knesset member would have succeeded in composing a government, while Netanyahu fails. “Liberman didn’t believe that Netanyahu would manage to dissolve the Knesset," he said on condition of anonymity. "That is why there is no more trust [between them]. As far as Netanyahu is concerned, Liberman is a clear danger who would do anything to harm him.”

Liberman’s bombshell, which he dropped during an interview on Channel 13 last Saturday night, threw the political system into turmoil. He accused both Netanyahu and Gantz of courting the ultra-Orthodox parties and promised, “We will force a government consisting of the Likud and Blue and White. We will do everything to block an ultra-Orthodox government. Let us hope we reach a point where no one can form a government without us.”

Actually, Liberman did for Israeli politics what the center-left parties have been trying to do for the past decade: He managed to draw votes from the right. The chairman of Yisrael Beitenu didn’t become a leftist. What he is doing is reshuffling the deck by offering an alternative, which can shatter the traditional division between right and left. That’s his big innovation.

But it’s not Liberman’s only innovation. He is at the forefront of the war against religious coercion while fighting the ultra-Orthodox from the right. Until now, this has been the agenda of parties in the center-left camp, like Tommy Lapid’s Shinui party in 1999 and his son Yair Lapid’s Yesh Atid party, which later integrated into Blue and White. It is the greatest risk that the prime minister has identified to date, and rightly so, as far as he is concerned.

Netanyahu’s initial response to Liberman’s statement, made through his spokesman, was evidence of the surprise and confusion he felt: “The cat is out of the bag. Liberman just announced explicitly that he is prepared to go with Lapid and Gantz and force the formation of a left-wing government. Anyone who wants a right-wing government must vote for the Likud, and only the Likud, headed by Netanyahu.” But that didn’t really work. Ever since the Knesset was dissolved on May 30, Netanyahu has been searching for the most effective strategy to harm the chairman of Yisrael Beitenu in the voting booth. So far, he’s failed in his effort to paint Liberman as a leftist, and he hasn’t been able to hurt him among Russian immigrant voters. Polls show that Liberman is actually getting stronger.

Senior sources in the Likud, who are close to Netanyahu, say that the prime minister is now formulating new strategies to harm Liberman in the voting booth. It is already obvious that a large part of the campaign budget will be used for this. In the meanwhile, he has recruited an adviser for the Russian immigrant community, attorney Ariel Bulshtein, and increased his activities in the Russian-language media. It is also believed that the new party planned by Tiberias mayor and Netanyahu confidant Ron Kobi was really intended to hurt Liberman. Kobi has been waging a bitter war against the ultra-Orthodox in Tiberias. He raised the secular banner in a city that has become increasingly religious over the last few years and became a familiar symbol of the war against religious coercion. On June 16, he announced that he would be running in the next election at the head of a secular right-wing party that will fight religious coercion. Liberman responded dismissively, calling him a “clown,” but another party running on the same agenda could, in fact, pose a problem for Yisrael Beitenu.

But so far, Liberman isn’t too worried about Netanyahu. He continues to launch personal attacks against the prime minister in the press and on social media, on an almost daily basis. These attacks focus on the ways Netanyahu succumbed to the ultra-Orthodox parties and failed in his dealings with Hamas, but also on the growing budget deficit. Liberman’s strategy has proved to be effective. He made himself relevant through his war on the ultra-Orthodox. Many secular Jews on the right, including immigrants from the former Soviet Union, identify with that sentiment.

Liberman’s most recent moves have caused the political system to align with him. As of now, he sets the election agenda, with all the other players reacting to him and whatever he does. In the last April election, it was Netanyahu who set the course and maintained the initiative. Now he finds himself being dragged after Liberman.

On June 17, Netanyahu tried to unite the ranks on the right by appointing Rafi Peretz and Bezalel Smotrich, heads of the United Right, as ministers of education and transportation respectively. At the same time, he has been running in-depth polls to help him decide on the kind of campaign to run against Liberman and the other parties on the right. It turns out that Blue and White, the party of generals that posed a real threat to him in the last election, is now the least of his headaches.