The Arab Joint List is ready to cooperate, even with Yisrael Beitenu’s Avigdor Liberman, to pass a law preventing Prime Minister Benjamin Netanyahu from forming a new government. 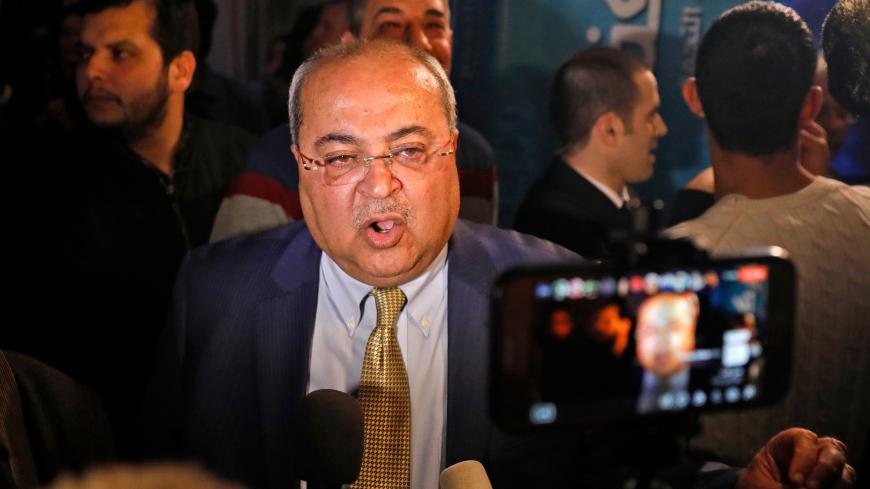 At the Ynet studios on Feb. 27, a week before elections in Israel, Joint List Chairman Ayman Odeh found himself in a heated discussion with Culture Minister Miri Regev over the Likud campaign’s attempt to delegitimize the country’s Arab Knesset members. Amid the hurled accusations, Odeh told her, “You [the Likud] won’t remain in power, and that will be because of the Joint List. You’re all corrupt! We’re sick of you!”

With the votes now tallied, it looks like Odeh might be vindicated. The Joint List won 15 seats, while the right-wing/ultra-Orthodox bloc walked away with 58 seats, three short of the 61 needed for a majority. In other words, for the moment, Prime Minister Benjamin Netanyahu does not have enough seats to form a government that could extricate him from his impending trial on corruption charges.

When it was determined that the Blue and White, Labor-Gesher-Meretz, Yisrael Beitenu and the Joint List held 62 seats among them, compared to Netanyahu’s 58, an old channel of communication between Ofer Shelah (Blue and White) and Ahmad Tibi (Joint List) suddenly sprung to life. The Joint List had been furious at Blue and White leader Benny Gantz for saying that he would only form a government with a Jewish majority. Suddenly, a new initiative by the Joint List to bring down Netanyahu superceded all else.

On the morning of March 4, Tibi lobbed a grenade that sent shockwaves through the prime minister’s residence on Balfour Street, terrorizing its occupants. “A prime minister who has been indicted for bribery would be obliged to resign in any normal country,” Tibi said to the press. “If he refuses to resign and a law is brought before the Knesset to prevent a prime minister under indictment for serious crimes from serving, we will examine it closely and consider supporting it.” Meanwhile, at the same time Shelah was giving an interview at Ynet studios in which he said that such a law seemed “appropriate” to him.

Al-Monitor has since learned that neither event was spontaneous or coincidental. It was all planned in advance to bring a close to Netanyahu’s time in office. The question of Yisrael Beitenu Chairman Avigdor Liberman and what he might do remained, but that was resolved beyond a shadow of a doubt the next day. According to a March 5 statement from Yisrael Beitenu, the party planned to advance two new pieces of legislation. The first would limit any prime minister from serving more than two terms, and the second would forbid an indicted member of Knesset from forming a government.

All of this caused Netanyahu to take his foot off the brakes. As I wrote in Al-Monitor on March 3, Netanyahu's strategy during the election campaign was to avoid upsetting Arab voters, so as not to provide them added incentive to head to the polling stations “in droves.” While he attacked the members of the Arab Joint List with one hand, he made conciliatory gestures to the Arab population with the other. He even went so far as to make the ridiculous claim that he considers them to be full citizens with equal rights. For obvious reasons, they weren’t buying it.

When Netanyahu learned that the Joint List had joined forces with his other political rivals in a maneuver targeting him, he returned to form. “The nation’s decision is clear,” he said. “The right-wing Zionist camp has 58 seats, while the left-wing Zionist camp and Liberman have 47 seats. The Joint List, which disparages IDF troops and opposes the state, doesn’t count.” In other words, according to him, Israel does not take the votes of non-Jewish voters into consideration.

With one sentence, Netanyahu jettisoned his efforts to ingratiate himself with Arab voters, revealing his efforts for what they truly were and challenging the Arabs' legitimate rights as citizens to vote and have an impact. It should be noted, however, that while it is certainly possible to be angry at Netanyahu and consider him a racist agitator — a title he has borne proudly over the years as attested by his own words and deeds — the miserable use of the term “Jewish majority” can be attributed to Blue and White leaders Benny Gantz and Yair Lapid, who used it during the campaign.

Netanyahu’s comments lit a fire under the Joint List and also served to bring them closer to Gantz yet again. “Netanyahu, let me teach you what democracy is,” Odeh said in an interview with Channel 12. “It is the rule of the majority, not just the Jewish majority. Pack up your things. You’re on your way home.” Tibi adopted a cynical tone. “Why take it step by step?” he tweeted. “Bibi [Netanyahu] can just pass a law denying Arabs the vote. Oh, I forgot! He doesn’t have a majority.”

Netanyahu has led the Joint List to abandon all its red lines. It now appears that achieving the objective of ridding Israeli politics of Netanyahu and defending the basic civil rights of Israel’s Arab citizens makes it acceptable for them to forge new alliances, even with Liberman. Yes, the very same Liberman whom they had vetoed for supporting the “transfer” of Arab Israelis and whom they once said should never be deemed acceptable.

In a conversation with Al-Monitor, Tibi confirmed that the Joint List would support an amendment to the law barring any Knesset member indicted for serious crimes from being tasked with forming a government. He also said that separate proposals would be submitted — one by the Joint List, one by Yisrael Beitenu. Knesset member Osama Saadi (Ta’al) has drafted the Joint List's bill.

There is still, however, a long way to go and obstacles to get past before approving the “Netanyahu Law” or a law limiting a prime minister to two terms. One hurdle includes the formation of new Knesset committees. It is also likely that the Knesset speaker, Yuli Edelstein (Likud), will need to be replaced to prevent him from introducing more obstacles and difficulties along the way.

Nevertheless, one thing is clear: The return of Arab voters to the ballot box and their participation in the political process can produce results. The voting rate in Arab and Druze towns and villages was equal to that of the Jewish population. In some towns, among them Umm al-Fahm and Taibeh, the Joint List won 98% of the vote. During the campaign, Netanyahu had tried, but failed, to drive a wedge between Arab citizens and Arab Knesset members. Instead, these citizens gave a resounding vote of confidence to their representatives. It was certainly a lot more resounding than the Jewish public’s support for Netanyahu.

Netanyahu’s assertion that the seats won by the Joint List “don’t count” is ridiculous. It's like saying that all the ballots cast in Arab towns and villages have no value whatsoever. That's what will make the Joint List’s revenge so sweet. It may not happen right away, but there will certainly be many discussions and debates among the partners of the loosely aligned collection of parties. Still, the fact that they can scare Netanyahu as they have must give them great satisfaction.