Prime Minister Benjamin Netanyahu appears to believe that it is not a problem for Arab citizens to vote as long as they cast their ballots for the Likud, otherwise they should not have a voice in their governance. 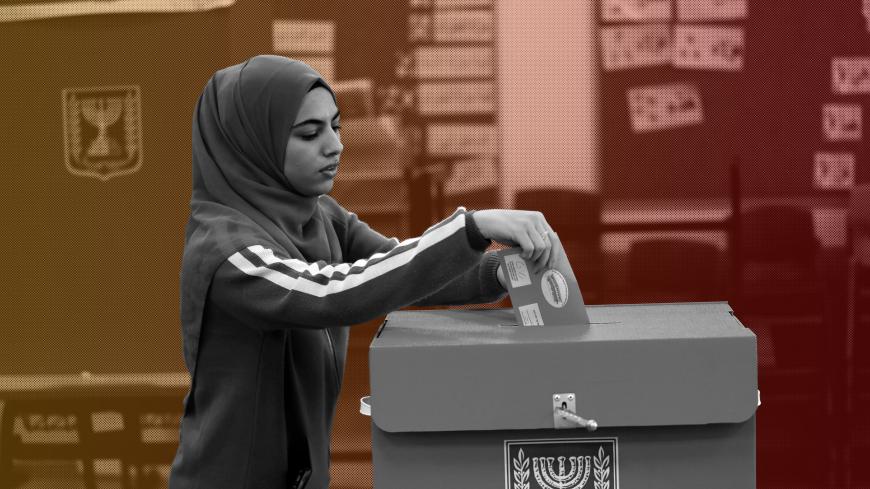 An Arab Israeli woman casts her ballot in Israel's national election at a polling station in Tamra, March 2, 2020. - REUTERS/Ammar Awad

“Every vote counts the same in Israel, and Netanyahu is well aware of that,” said Blue and White leader Benny Gantz on March 7, responding to remarks made three days earlier by Prime Minister Benjamin Netanyahu that appeared to imply that he rejects the very idea of the Arab Joint List, with its 15 Knesset seats, participating in the political arena. “The people’s decision is clear,” Netanyahu had said. “The right-wing Zionist camp consists of 58 seats. The left-wing Zionist camp, including [Yisrael Beitenu’s Avigdor] Liberman who has joined it, consists of 47 seats. The Joint List, which denigrates our soldiers and opposes the very existence of the State of Israel … is of course not part of this equation.”

Since the release of the results from the March 2 election Netanyahu has seemed tense. He even looks pale. For one thing, he realizes that the end of his time in office is fast approaching. How absurd it is that his political fate is about to be determined by the 581,501 votes that the Joint List received, including more than 20,000 of them from Jews. It looks like Netanyahu and his associates are going out of their minds over the possibility that the same Arab community that Netanyahu and his Likud have incited against relentlessly and even legislated against — e.g., the Nationality Law on the Jewish nature of the state of Israel, the Kaminitz Law, making it easier to demolish Arab homes — might have a voice in deciding who will be the next prime minister.

Meanwhile, the Likud is rejecting the Joint List's election results and even plans to petition the Supreme Court to overturn them. It is very likely that this is just another ruse by Netanyahu and friends to delay the announcement of the official tally and thus postpone legislation initiated by Yisrael Beitenu to prevent any indicted politician from forming the government.

“It starts with delegitimizing their votes and ends with denying them their citizenship,” Dr. Abd el-Qadir, a dentist from Taibeh and a partner in a private dental clinic in Givatayim, told Al-Monitor. “It reminds me of the dark regimes of the past. Netanyahu claims that it is dangerous to rely on the Arab Knesset members to form a government. What does he have to say about the Arab doctors who treat millions of Israelis, Jewish and Arab alike, in every single hospital? That’s not dangerous?”

Despite Netanyahu's claims, he did not win the election. No matter what he says, 58 (the votes for the right-wing/ultra-Orthodox bloc) will always be less than 62 (the votes for the center-left bloc). Given that Netanyahu is unhappy with the election results, he is trying to discount the votes of Israel’s Arab citizens. What is really interesting is that in a video he posted March 6 on social media, he says, “I have nothing against Arab voters. I appealed to them too, and we received Arab votes. I’m proud of that.” In other words, as far as Netanyahu and the Likud are concerned, there is no problem with Arab voters as long as they vote for the Likud. As soon as they vote for the Joint List, and their votes could lead to him being replaced, they should be removed from the equation.

Yinon Magal, a right-wing journalist with Radio 103 and a former Knesset member for HaBayit HaYehudi, explained the situation well in a conversation with Al-Monitor: “I think Arab votes are completely legitimate. Balad [one of the four factions constituting the Joint List], which supports terrorism, is not legitimate. I think that a government that has to determine whether we go to war or have peace and that makes decisions about the fate of the Jewish people must be based on a Jewish majority.”

This may capture the essence of the situation. As long as Arab voters only vote, without having any impact on government policy, there is no problem with them.

Last September in Al-Monitor, I pointed out how Netanyahu might be the prime minister who has made the most deals in the Knesset with the Arab parties. Gantz said as much in a speech on March 7: “It turns out that Netanyahu can join forces with [Joint List senior] Ahmad Tibi, but he wants the exclusive right to do that.’’

In a conversation with Al-Monitor, Ohad Levy, who works in high tech in Tel Aviv, said, “Netanyahu identified the Blue and White party’s soft underbelly. It is the Israeli mainstream’s suppressed Arabophobia. In no other democratic country would a leader even consider dismissing 20% of the population based on their religion and then just moving on.”

In fact, all the elections over the past year can be seen as a referendum on Netanyahu’s government, not one party's platform or another. That seems to be the reason why no one is dismissing the possibility of cooperation between Yisrael Beitenu and the Joint List. Knesset member Eli Avidar (Yisrael Beitenu) hinted as much in a March 8 interview with Army Radio, when he said, “We will do what is in our voters’ best interest.”

In the last three elections, Netanyahu has consistently failed to reach the magic number of 61 seats for his bloc, which would have ensured him a mandate from the president to form the next government. It is doubtful whether anyone in the Likud even considered conducting an internal investigation to figure out how the prime minister’s actions and words actually led to the formation of the “Netanyahu block” bloc and the “anyone but Netanyahu” camp, especially as they involve parties that share no ideological common ground.

Gantz, who wants to replace Netanyahu, generated considerable anger among Israel's Arab citizenry for using the term “Jewish majority” in the recent election campaign and on more than one occasion. He even explicitly promised not to sit in a coalition with the Joint List. Gantz has nothing to worry about, however. The Joint List isn’t asking to be part of any government. It would rather influence government policy from the outside. That is why the government currently taking shape should be called the “Netanyahu-removal government.” The one and only purpose of this government is to kick Netanyahu out of the prime minister's residence on Balfour Street.

Ofer Shelah (Blue and White) is a brilliant member of the Knesset. He is also one of the few people in his party who really understands politics. In a conversation with Al-Monitor, Shelah remarked, “The image of Netanyahu erasing the votes of 20% of Israel’s Arab citizens could be Exhibit A for any international organization that wants to impose sanctions on Israel. It is a declaration of war against the very essence of Israel as a Jewish and democratic state.”

Ahmad Tibi, Shelah's partner in the open-secret line of communication between Blue and White and the Joint List, proffered, “What would happen if the United States dismissed the votes of African American senators like that or if Germany would do the same to its Jewish elected officials? Netanyahu is adopting the ideology of the despicable Rabbi Kahane.”