Ahead of April 9 elections, Jewish voters on the left have surprisingly come out in support of Taal, headed by Israeli Arab Knesset member Ahmad Tibi. 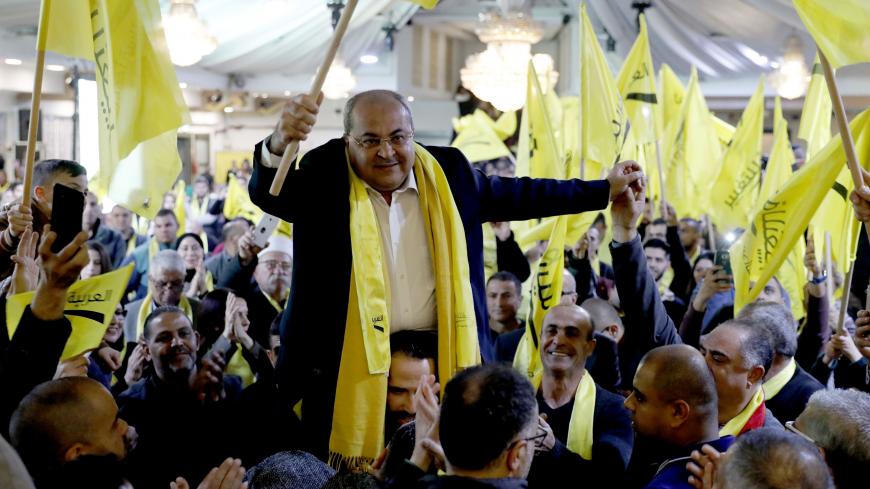 Will Knesset member Ahmad Tibi, chairman of Taal, succeed in breaking the longstanding taboo of “anyone but Arabs in the coalition”? While it is still too early to tell, the possibility is already keeping Prime Minister Benjamin Netanyahu awake at night.

On the evening of the 2015 elections, Netanyahu had warned, “Arab voters are heading to the polling stations in droves,” managing to drum up more votes for himself. On Feb. 9, he posted a video on his Facebook page attacking Benny Gantz, head of Israel Resilience, and insinuating that Arab votes are illegitimate. The target of his intimidation campaign was Tibi: “You vote for Gantz; you get Tibi,” is the title of the clip, which claims, among other things, “The Oslo Accords passed because of the Arabs’ votes. … Former Chief of Staff Gantz will do it again.”

According to the latest polls, Taal is likely to win five to seven seats in the next Knesset. In the battle between the two major blocs over every single vote, seven seats could tip the scales in favor of the center-left.

Tibi recently decided to withdraw from the predominantly Arab Joint List after failing to convince his partners — the other three parties constituting the Joint List — to give his party greater representation. He has not ruled out building a new bloc with parties from the center-left, which could prevent the right from forming a coalition and allow Gantz to form the next government.

In a Jan. 27 interview with Army Radio, Tibi said, “We previously had enough seats to block it [the right] in the 1990s. We were successful then, and we will have no problem re-creating that success.” Tibi was referring to the 1992 elections, after which Yitzhak Rabin formed a narrow left-wing government of his Labor Party and Meretz, with outside support from Hadash and the Arab Democratic Party (headed by Abdulwahab Darawshe, formerly of Labor).

Since that time, there has been growing incitement against the Arab parties and the legitimacy of their voters, and not only by Netanyahu. Former Defense Minister Avigdor Liberman of Yisrael Beitenu is basing his current election campaign on the motto “Liberman will not suck up — to Tibi or the ultra-Orthodox.”

While Netanyahu and Liberman have been inciting against Tibi, however, he has been getting a boost from a surprising, if unforeseen, new direction: Jewish voters on the left. Over the last few weeks, they have come out in support of Tibi’s new party, and there are enough of them to earn him at least one more seat. The author Nir Baram was the first prominent Jew on the left to come out in support of Tibi.

Baram — who won the Prime Minister’s Prize for Hebrew-language Writers in 2010 and the 2018 Ophir Prize for his documentary short film “The Land Beyond the Hills” — is the son of Uzi Baram, a former minister closely identified with the Labor Party. In a series of tweets and radio interviews, Nir Baram announced that he would vote for Tibi and eulogized the Zionist left, “which died already, back in 2001. If there is no Jewish-Arab left in the future, there will be no left.”

In a Feb. 4 interview with Army Radio, Baram explained that Hadash, the largest partner in the Joint List and which once had Jewish supporters, is an old-fashioned party. It has spoken about the war in Syria as if it were a case of American imperialism. As Baram put it, “This is a party that no one [Jewish] will vote for this time, so the best alternative is Taal.” Baram then went on to explain that Tibi knows how to speak to both Jewish and Arab society and that he could win a historic victory over the division between left and right.

Tibi could not have hoped for more. Speaking to Al-Monitor, he admitted that Baram began what has become a trend embraced by more and more Jewish voters searching for an alternative. He said contentedly, “If more democratic Jews on the left vote for me — if there are thousands, at least one seat — I will have considerable influence, and that will make it possible to find partners to block the right. It takes two to tango.”

Tibi does, in fact, have a good chance of winning votes from Jews on the left who once voted for Hadash, largely because of Knesset member Dov Khenin. Having served as a member of the Hadash Knesset delegation since the 17th Knesset, Khenin resigned from politics on Jan. 1, announcing that he would not seek reelection. As a parliamentarian, he left his mark on social and environmental issues and was seen as a fighter in the war against corruption. Many were drawn to his pleasant, soft-spoken manner and his image as a clean and humble politician whose character bordered on the ascetic.

Meanwhile, Ofer Cassif was elected to fill the seat reserved for a Jewish member of Hadash. Cassif is a radical left-wing activist with a doctorate in philosophy. He was also one of the first Israeli soldiers to refuse to serve in the territories. His provocative, militant style makes him the exact opposite of Khenin.

In a Feb. 7 interview with Haaretz, Cassif reiterated some of his past statements, which caused an uproar at the academic institutions where he had taught in Jerusalem and Tel Aviv and at Sapir College. In the most provocative of them, he referred to Justice Minister Ayelet Shaked as “neo-Nazi scum,” called Liberman a “descendant of Adolf,” and described Netanyahu as the “murderer in chief.” He also called the new military chief of staff, Aviv Kochavi, a “war criminal.”

Cassif thus will not only fail to attract Jewish voters, he may actually chase them away. After Tibi left the Joint List, and the Islamic Movement, another Joint List partner, announced that it would be running alone, only Balad was left to run with Hadash on the list.

Tibi is a talented politician. In the past, he served as an adviser to the Palestinian Authority, but under the current Knesset mandate, he has acted to change his public priorities and his party’s political agenda. Over the past few years, he has made a point of operating as a parliamentarian promoting socioeconomic and consumer-oriented legislation on behalf of the weakest segments of Israeli society, Jewish and Arab alike. Within this framework, he now easily fills the political vacuum left by Khenin’s departure.

Tibi says that Khenin’s resignation was a loss to the entire Knesset. He also says that he doesn’t want to appear as if he benefited from the vacuum left by Khenin by pocketing the votes of the Jewish left that shifted to him from the Labor Party and Hadash. He would rather win those votes on his own merit, because of his parliamentary record.

“Even people who disagree with me know everything about me,” he said. “I have presented my activities in the most transparent way possible. My opinions and the laws that I initiated speak for themselves.”

Commenting on Cassif's selection as the new Jewish representative on the Hadash list, Tibi said Cassif’s worldview probably helps Tibi himself win more votes. It will be interesting to see how these two politicians react after April 9, given the harsh delegitimization campaign that Netanyahu and the right-wing parties have lying in wait right around the corner.