With the Jewish left-wing parties crumbling, the Arab Joint List seeks to lead the camp and appeal also to Jewish voters. 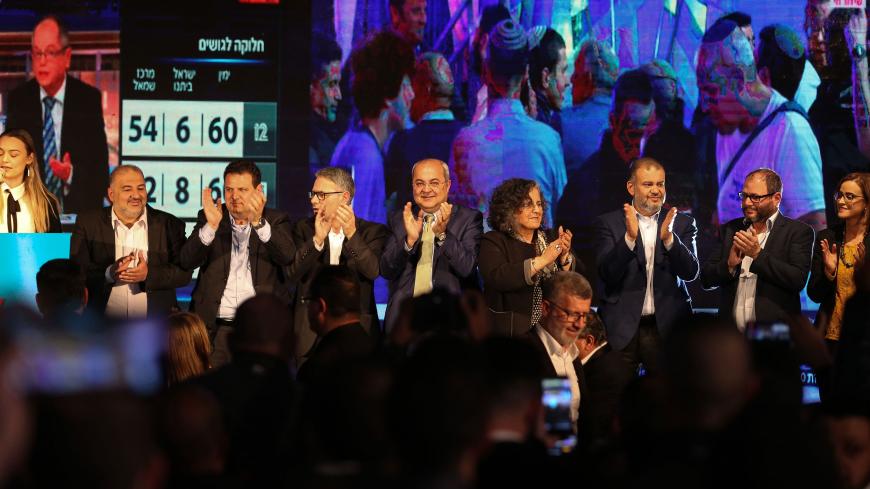 In the late evening hours of April 13, minutes before the expiration of the midnight deadline for Blue and White party leader Benny Gantz to form a new government, President Reuven Rivlin’s office announced that he had granted Gantz’s request, endorsed by Prime Minister Benjamin Netanyahu, for a 48-hour extension.

However, even if Gantz and Netanyahu form their power-sharing government by midnight on April 15, Gantz’s decision to join forces with Netanyahu and the nerve-wracking negotiations Netanyahu put him through in recent weeks have dealt the Israeli left a crushing blow. Gantz’s move, which resulted in the dismantling of his original Blue and White party, has left voters of the center-left disappointed and frustrated, some angry that their votes were “stolen” and handed to the Netanyahu bloc, and all realizing that the hope Gantz offered when he formed his center-left alternative to Netanyahu is dead.

“Netanyahu no longer has any rivals. When he buys off your leader so easily, it’s frustrating, painful and leads to despair,” former Knesset member Issawi Freij of the left-wing Meretz Party tells Al-Monitor. Freij is frustrated not only by Gantz’s surrender, as he puts it, but also by the decision of his own Meretz Party to place him low on its list of candidates for the March 2 elections, which left him out of the Knesset despite his broad popularity that had drawn thousands of Arab citizens to vote for Meretz in previous elections. “The final knife was the one Meretz stuck into the back of its only Arab candidate,” he says. Freij is not referring to the implications for himself personally, but rather to the message this conveyed to Arab voters. If the left does not want the Arabs, he explains, all they can do is vote for an Arab party — in other words, for the Arab Joint List (as an estimated 87% did in the last elections).

Jewish voters are experiencing similar, deep-seated disappointment with their leaders. The series of betrayals that transferred votes from the left side of the map to Netanyahu was much more than they could take. First, Gesher head Orly Levy-Abekasis crossed the lines, stunning her former running mates in Meretz and the Labor party. Then, Labor party leader Amir Peretz and Labor Knesset member Itzik Shmuli violated their campaign promises without batting an eyelash and crossed the line to Netanyahu’s side — by way of joining Blue and White — without offering their stultified voters a reasonable explanation.

Can Meretz, which had hooked up with Labor and with Levy-Abekasis to run on a single ticket, still lead the left wing and fill the void created by its disastrous decision-making? According to a Channel 12 News poll aired on April 13, if elections were held now, Labor would get even fewer votes than Levy-Abekasis’ small Gesher party, and neither would win sufficient votes to send representatives to the next Knesset. The poll still gives Meretz five Knesset seats in the 120-member legislature, but not a sufficient number to turn it into a significant alternative to challenge the right.

The era of the Labor party, which led the State of Israel through its establishment and first three decades, is no more. A new era has begun with the search for a target-oriented alternative. The Arab Joint List, a union of four Arab parties that holds 15 Knesset seats, is well aware of the repercussions for itself. It has already started taking the reins to lead the Israeli political left as the only party that has remained loyal to its voters and offers the same interesting messages as did the Jewish left: Resolution of the conflict with the Palestinians and a socialist or social-democratic socio-economic platform, which could appeal to more and more Israelis, Arabs and Jews affected by the economic crisis induced by COVID-19.

With the Jewish left shattered, some in the Joint List are calling not only to intensify its campaign for more Jewish support than the roughly 20,000 it received on March 2, but also to include Jewish Knesset candidates and create a diverse bloc signaling Jewish-Arab cooperation.

“The issue of mobilizing additional left-wing forces for the Joint List, whether as a whole entity or as individuals, has been under discussion at least since last April,” Knesset member Ofer Cassif of the Hadash Party — the only Jewish lawmaker on the Arab Joint List — tells Al-Monitor. Cassif argues that the idea of creating an alternative to the current forces governing Israel, based on the Arab Joint List, is gaining traction given deep voter frustration. Nonetheless, he adds, his Hadash Party is an ideology-inspired one seeking like-minded members — not stars for guest performances. “Anyway, such decisions are made in a democratic manner by the party institutions,” Cassif adds.

Cassif is certain the Joint List will not fall apart, despite its diverse makeup, and is confident that any new Jewish grouping on the left will only coalesce around the Joint List. “Some on the left thought of forming a new Jewish-Arab party as an alternative to Hadash, but that won’t work. If they want to join our grassroots activity and then join us on the electoral level, that would be possible; no one is ruling this out,” Cassif says.

Cassif believes that even if Gantz and Netanyahu manage to overcome their differences and forge a unity government, it will not last longer than a year. That is why the Joint List must be prepared with the right messages and lineup in case new elections are called soon, in order to form a large, powerful force.

The Arab Joint List will undoubtedly lead the Israeli left. Even if Meretz succeeds in overcoming its many problems, it will not be able to provide a broad-based alternative of the type offered by the Joint List. Freij says Meretz leader Nitzan Horowitz made a colossal mistake by joining forces with parties of a different nature to the unique Meretz brand (Labor and Gesher) because he feared going it alone in the latest elections. “This fear paralyzed him, heavily damaging the Israeli left in general and Meretz in particular,” Freij says. Meretz, he adds, also realizes it will have to undergo major rehabilitation. Thus, for now, the Joint List is the big winner in the race for leadership of the left.

“We are currently holding meetings on forming a Jewish-Arab entity. A meeting has been set up for me next week with [Yesh Atid leader] Yair Lapid. I want to understand his plans,” Freij says. Lapid offered him a place on the list for the next elections in a bid to add an Arab candidate to its lineup, he says. The Arab Joint List also offered him 14th place on its candidate lineup. Senior Joint List member Ahmad Tibi “was on my case and he told me ‘whatever you want,’ but I told them I am not changing my position; I believe there is no place for a sectoral party because the time has come for equality and justice. We must join forces only with minorities.’’

Unlike Meretz, the Arab Joint List is not engaging in soul searching. It is focusing on a targeted appeal for additional Jewish voters that will start off with joint activities and could result in the eventual introduction of Jewish candidates into its lineup, probably through its constituent Hadash Party and possibly even through the Balad party.

Benny Gantz, who generated a big bang in Israeli politics — a bang that is now playing directly into Benjamin Netanyahu’s hands — brought about all of these changes.