Despite the support it gained in the September elections within the Israeli-Arab communities, the Meretz party list will not include an Arab candidate in a realistic slot. 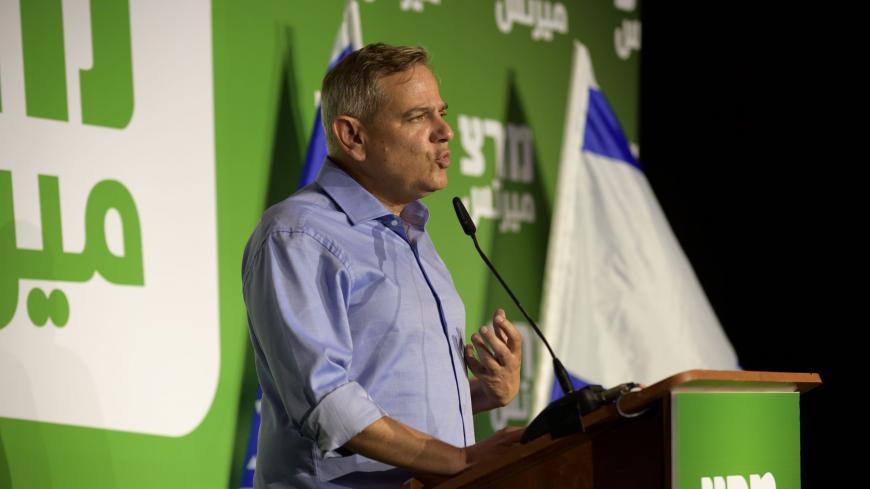 Midnight on Jan. 15 will be the last chance parties have to submit their lists of Knesset candidates for the 23rd Knesset to the Central Elections Committee. With both parties hovering around the electoral threshold, Meretz and Labor-Gesher came to the conclusion on Jan. 12 that they have no choice. If they really want to survive the upcoming elections, they will have to unite. “We need to join forces with Meretz,” said Amir Peretz, Labor-Gesher party chairman and Knesset member, at a meeting of his party’s leadership. Then he added, “Even if we are being forced into it." He and Meretz party Chairman Nitzan Horowitz then met for a meeting described as “decisive.” By the end of the meeting it was decided that the two parties would run March 2 on a joint ticket.

On the eve of the September 2019 election, Meretz merged with former Prime Minister Ehud Barak’s Democratic Israel and Stav Shaffir’s Green Movement and ran as a single list, known as the Democratic Camp. Together, these three parties were able to garner just five seats. At the same time, the Labor party, which joined forces with Orly Levy-Abekasis’ Gesher party, received just six seats. Since then, the Democratic Camp has fallen apart, and Meretz, like Labor-Gesher, could, according to the most recent polls, fall below the electoral threshold.

Even before the decision of a joint run, Meretz signaled that it will not have an Arab candidate in a realistic slot on its list. This direction was confirmed after the unification. Knesset member Issawi Freij had saved Meretz twice: first in April 2019, when he managed to recruit thousands of voters in Arab settlements, particularly his own town of Kafr Qassem, and again in the September 2019 election, when he pushed for the party to join forces with Ehud Barak. This time around he has been pushed to the fifth slot on Meretz’s list. More so, with the unification, he is now placed in the 11th slot — a spot that is hardly electable.

In the past, Meretz took pride in being a party known for raising the banner of Jewish-Arab partnership. This time, it came down hard on Freij in particular and the Arab voters in general. The party’s Knesset members are exhausted by all of the recent elections coming one after the other, so that today, they are fighting less for the principle of partnership than they are for their own personal survival.

Who even remembers now that just one day after the April 2019 election, when Meretz barely passed the electoral threshold, then-party Chairwoman Tamar Zandberg admitted that Meretz won at least one seat from Arab towns and villages? It managed to achieve this thanks to Freij from Kafr Qassem and Druze candidate Ali Salalha from Beit Jann. At the time, Zandberg came to the conclusion that “if the center-left camp doesn’t create a partnership with the Arab society, it will not be able to return to power. If, on the other hand, the Arab sector votes like the Jews, there will not be a prime minister from the right."

Recently, Meretz has been negotiating with Mazen Ghanaim, former mayor of the Arab town Sakhnin, and Talal al-Karnawi, former mayor of the Bedouin town Rahat. They both rejected a less than generous offer when they learned that they would not be given a realistic slot on the party’s Knesset list. According to publications, the first four Meretz slots on the united new list are now filled by Nitzan Horowitz (third slot), Zandberg (fourth slot), Yair Golan (seventh slot) and Ilan Gilon (eighth slot).

The united list seems more generous vis-a-vis the Labor-Gesher partner. As things look now, Freij is being pushed way down the list. That will be the situation on March 2, unless the leaders of the two parties realize that they are making a mistake of historic proportions and effectively divorcing themselves from Arab voters. “Every vote I brought to Meretz was grabbed out of the lion’s jaws. I want to be part of the ship, or rather I insist on it, instead of being nothing more than a fig leaf,” Freij told Al-Monitor shortly before the unification decision. (He was referring to votes that would definitely have gone to the Arab Joint List were it not for him, along with undecided voters, including many who considered casting their ballots for the Blue and White party.)

The text of part of the interview follows:

Al-Monitor:  You’re nothing more than a fig leaf now.

Freij:  There are still people in the party for whom — deep in their hearts — Arabs are little more than a fig leaf. I will not let that happen.

Al-Monitor:  Do you think you made a mistake when you initiated the merger with Ehud Barak? Maybe other members of Meretz are getting back at you for the results of that decision and the damage it caused. Barak left you all alone and went his own way.

Freij:  I believed at the time that this sort of leadership could generate a big bang and a real change within the political left, and so I went for it. It is possible that I was wrong.

Al-Monitor:  People pay for their mistakes, don’t they?

Freij:  I’ll let you know after March 2. A leader is judged by how he puts the good person off to the side and makes a decision based on political, electoral and ideological considerations. The Arab vote is more critical than ever. I can’t stress it enough. My party is making a mistake.

Freij said that there are advanced negotiations underway with Taleb el-Sana and Abdel Wahab Darousha of the Arab Party to put a woman representing their party in the No. 6 slot of the Meretz party list. He refused to reveal who that woman might be. Of course, that is no assurance that such a candidate or even he himself would actually become members of the next Knesset.