Before he sets off to convince Likud voters to join his Labor-Gesher coalition, leader Amir Peretz will have to keep his own voters from turning to a brand-new leftist group. 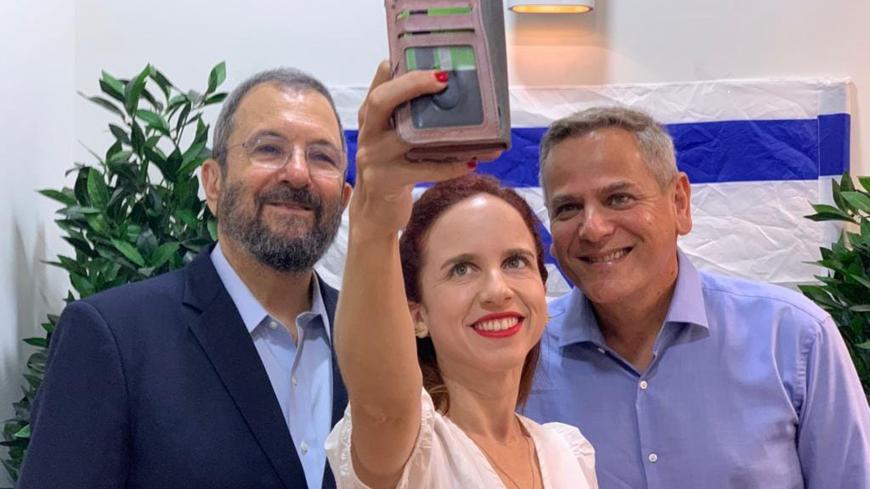 When Knesset member Amir Peretz returned to head the Labor Party July 2, he imagined that he would be able to increase his party’s strength at a rate of one seat per week up until the election. In that way, he would reach the finish line with 15 seats. One week ago, he surprised the left when he announced a merger with Gesher, a party headed by Orly Levy-Abekasis that positions itself on the social right. Having already announced that he plans to win votes from the soft right, Peretz slammed the door in the faces of former Prime Minister Ehud Barak and Meretz chairman Nitzan Horowitz.

Yesterday morning, it was his turn to be surprised. Barak, Horowitz and former Labor member Stav Shaffir flooded the social networks with a selfie of them standing together, announcing that they were joining forces in a new list called the Democratic Camp.

Later that evening, after that riveting day, Peretz sat in the Channel 12 News studio with a chilling poll splashed on the screens. It predicted that his Labor-Gesher coalition would only win five seats — one less than Labor won in April’s election. In contrast, the new list founded that morning had skyrocketed to 10 seats.

Barak had faced a crisis over the last few days and was barely treading water in the polls, not least because of his ties with disgraced billionaire Jeffrey Epstein, who is currently embroiled in a sex trafficking scandal. He therefore agreed to the take the number-10 slot in the new list. By putting his ego aside, he spared himself further humiliation. But there was also an advantage to his decision to join forces with Meretz and Shaffir: It took the spotlight off him so he could continue to pummel Prime Minister Benjamin Netanyahu while celebrating Peretz' crash. After all, just three days earlier, Peretz called on him to drop out of the election so as not to waste votes on the left.

“I recommend that everyone remember how [Shimon] Peres compared the polls to fine perfume. It may smell nice, but you mustn’t swallow it,” said Peretz in an interview with Channel 12 News when confronted with the devastating numbers.

Peretz is right. Polls are nothing more than an illusion. But Peretz also knows that they do reflect the current political situation. The recent poll shows that not only is Peretz failing to draw new voters from the right, he is not even winning back the seats that Labor lost to the Blue and White Party. While Blue and White is also losing strength, according to the most recent polls, its seats are shifting to the Democratic Camp and not to Labor-Gesher. The Channel 12 poll found that the Blue and White Party has shrunk to 27 seats, while the Likud has shrunk to 29. This means that voters are shifting parties within the center-left camp, but there are no new voters from the right, as Peretz had hoped.

Peretz now has to stop the leak of voters from the Labor Party to the Democratic Camp, which is already poised to be the popular party on the left in the next election. Knesset member Itzik Shmuli, who is now considered a senior member of Labor, pleaded with Peretz to unite with that party, and even hinted if that doesn’t happen, he would be forced to reconsider his future in Labor. Nevertheless, it is believed that he will remain in the party and eventually run again in its leadership primaries to replace Peretz.

Peretz walked into a trap of his own making. On one hand, he opened the party’s door to the social periphery, Mizrahim and Likud supporters, all in an effort to win votes from the Likud. On the other hand, he kept reiterating that he would not sit in a government with Netanyahu as long as the prime minister was under indictment. These two positions stand in contradiction to each other.

Peretz’ strategy is based on the idea that he knows how to win seats from the Likud and even return the center-left to power. He frequently points to the 2006 election as evidence that he is right. Back then he was elected head of Labor, introduced a social agenda and managed to win a few seats from the Likud, particularly in towns in the periphery. Peretz refuses to consider the fact that back in 2006, the Likud under Netanyahu was already battered and bruised after a recent split within the party. It lost many seats to Kadima, headed by Ariel Sharon, while Netanyahu, who served as finance minister, was responsible for a number of harsh economic decrees that were particularly damaging to Likud supporters in the social periphery. They got back at Netanyahu by supporting Peretz, himself a Mizrahi Jew from the periphery.

Things are different in 2019. Netanyahu is now a powerful brand in the Likud, and Likud-dominated towns in the periphery received hefty budgets while he was in office. It is therefore hard to believe that they will abandon him for Peretz, who heads a small leftist party. Furthermore, Peretz already had a strong infrastructure of Labor voters back in 2006, something that he no longer has.

To Peretz’ credit it must be said that he thinks outside the box. He realizes that for the last few years, the center-left has had a set number of seats and he has to find creative ways to break the deadlock. “I see the polls, but I also see the people. Every day, we meet groups who have never been anywhere near the left-wing camp, but who nonetheless insist that they will vote Labor,” said Peretz in his interview with Channel 12. He is so infatuated with the idea that only he knows how to win votes from the right that Peretz is actually losing his base. And yet, as far as Peretz is concerned, his decision to join forces with Levy-Abekasis will bring about the fall of Netanyahu’s government. And he believes that he will be the tie-breaker.

Aug. 1 is the deadline for the parties to submit their lists of candidates for the 22nd Knesset. At that point, the election will enter its critical stage. What will happen on the center-left? Given the most recent developments, three lists will compete for votes in the same voter pool: Blue and White, the Democratic Camp and Labor-Gesher. Such circumstances will inevitably lead to infighting and cannibalism within the center-left.

People around Peretz are already saying that the Democratic Camp is just a passing trend. Having declined in the polls, the Blue and White Party will try to win back voters who fled to the Barak-Horowitz-Shaffir list. Given the current figures, it looks like Peretz will have to fight for his own house first, before he sets off to win new voters from the Likud.