Would Israel’s left succeed in uniting ahead of elections?

The left-wing Meretz and Labor parties know that running on one ticket could garner more votes, but have failed so far to reach an agreement. 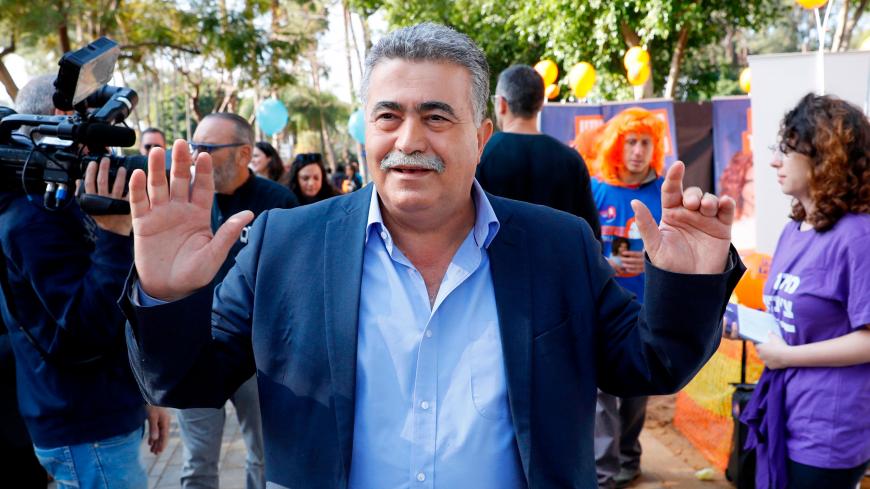 On the night of July 16, Chairman of the Labor party Amir Peretz and Chairman of the Meretz party Nitzan Horowitz, the new leaders of their left-wing parties, held a meeting. On the table was another attempt to create a mechanism for a joint run in the upcoming September election in order to maximize their electoral share. The need for unity is clear; the situation of the two parties is dire and their unity could create a significant left-wing party. Despite this, real progress was not made.

Reports of a successful meeting that came out of the two campaign offices and were promoted to the press did not show the large gaps between them. Even though both understand the need for unity, they have not managed to advance it yet.

A source who spoke with Horowitz after the meeting got the sense that Peretz spoke a lot about ideology and about his desire to bring into the party people from the right with the goal of getting the votes of Likud voters. Horowitz is wary of this. In his view this is not the platform to pursue, especially since in the last election, in April, Meretz got the voting equivalent of a parliamentary seat and a half from the Arab public out of Meretz's four seats. He does not understand why a left-wing party should appeal to right-wing voters.

On the other hand, a source who spoke with Peretz got the sense that he is sure of his ability to appeal to right-wing voters on the periphery, as he did in 2006, when he previously served as chairman of Labor.

Beyond that, most Meretz Knesset members are not especially excited about forming a united front with Labor, because they are concerned about being pushed to an unrealistic spot on a joint list of candidates.

On the evening of July 18, it all became clear. The hints by Peretz about wanting to add figures from the right were translated into an agreement — secretly negotiated — with former Knesset member Orly Levy-Abekasis. Levy-Abekasis served for many years as legislator for Yisrael Beitenu. After leaving Yisrael Beitenu, she established her own Gesher party. But Gesher failed to pass the Knesset-entry threshold in the April elections.

In the afternoon, Peretz had announced that he would hold a special and dramatic press conference. Two hours later, standing on the stage together with Levy-Abekasis at the Journalists’ House in Tel Aviv, he revealed that she will get a senior spot on his list, together with one or two members of her Gesher party. The united list is to be renamed, probably as the Labor-Gesher list.

Ostensibly, this unification reduces significantly chances of a partnership between Labor and Meretz. Nevertheless, the deadline for submitting party lists for the elections is still not until Aug. 1, so anything can happen.

On the morning after, Horowitz attacked the move, blaming Peretz for instigating the partnership with Levy-Abekasis in order to sit in Benjamin Netanyahu’s (future) government. In an interview with the Israel Army Radio Horowitz said, "I came to talks with Peretz willingly, with the goal of maximizing votes and repair the error made by [former Labor Chair Avi] Gabbay at the last elections. We want to offer the public a new vision. We had some talks but when leadership was needed, Peretz refused the partnership."

Peretz took an enormous gamble. By unifying with Gesher he hopes to repeast the 2006 success, when he served as party chair and managed to bring aboard quite a few soft right-wing voters. On the other hand, it is doubtful whether a similar move could take place in the Israel of 2019. All polls indicate that the Likud is a large party with supporters that are strongly attached to their leader, Prime Minister Netanyahu. More than anything, Peretz distanced his natural partners.

On the eve of Peretz and Horowitz’s meeting, Channel 12 reported on a problematic poll for both of them, which indicated that their elections to lead their parties have not changed their parties’ dreadful situation. Meretz stands to win four seats, on the brink of the vote threshold, and Labor is stuck at six. This situation is not expected to dramatically change by September as long as the Blue and White party remains stable in the polls. Peretz and Horowitz have been unable to win back votes that fled to Blue and White.

According to the poll, Ehud Barak’s new party, Democratic Israel, barely manages to pass the vote threshold and would win four seats. That’s a much smaller number than he hoped for. Political logic says that the three of them should join forces. But Peretz and Horowitz are not excited — neither together or apart — about joining forces with Barak. Peretz was even warned by former senior Labor leaders of Barak’s capabilities for destruction, as he had divided the party in the past.

The lack of excitement about Barak has changed in the meantime to a recoiling from him. On July 16, a photo of Barak at the doorstep of Jewish billionaire Jeffrey Epstein's home in Manhattan, with his face covered, was published. Several young women were also photographed entering the extravagant townhouse. These photos, taken in 2016 and now published by the British tabloid the Daily Mail, put the 77-year-old Barak on the defensive. His campaign has suffered a heavy blow and the whole left-wing camp has been embarrassed. The photos also significantly reduced the chances for the other parties to unite with him. Since they promote themselves as fighters against the rule of the rich, Peretz and Horowitz would have a tough time explaining an alliance with Barak, who has had a longstanding business and personal relationship with Epstein, a man convicted of soliciting a 17-year-old for prostitution and now arrested on serious charges of sex trafficking of minors. In the background of all this is Barak’s stubborn refusal to reveal why he received about 10 million Israeli shekels ($2.8 million) from the Wexner Foundation, which was managed by Epstein.

Barak announced that he intends to sue the Daily Mail, which insisted that it will not take down the photos. Barak understands well the extent of the campaign blow that has befallen him and accuses Netanyahu of standing behind the attempt to destroy him politically. All this does not change the facts: Barak’s problematic relationship with Epstein and the visit to his home. This is not how Barak planned his return to politics; in his mind’s eye he saw himself standing at the head of a union of left-wing parties, pushing aside Blue and White leader Benny Gantz as a candidate for prime minister, removing Netanyahu from officie and returning to the prime minister’s post by storm.

In the meantime, Barak is fighting for his good name and getting embroiled in an embarrassing squabble of insults with Yair Netanyahu, the prime minister’s son. Barak called him “a lecher and an inciter, a parasite,” and Netanyahu junior did not hold back, tweeting, “Old geezer, drunk with whiskey, probably suffering dementia!”

These are not the only bad news this week for the left-wing camp. On July 16, Knesset member Shelly Yachimovich, a former chairwoman of Labor, announced that she is taking a break from politics and will not run in September’s election. She explained that she is no longer effective. Yachimovich is not just another politician, she is one of the main symbols of the social-democratic camp, an excellent parliamentarian, values-driven and ideological. Her resignation reflects the demise of the left, which has not succeeded in reviving itself. Behind her words is a dire reality. Yachimovich’s resignation is a hit for Labor and Peretz, who not only is failing to recruit new figures but is being abandoned by a respected figure.

Labor and Meretz estimate that until Aug. 1, the last date for submitting candidate lists, public pressure will grow for the two chairmen and the alliance will happen. Barak could be left out. He himself does not intend to make life easy for them, and he has sent messages that he would run in any case. Thus, the responsibility for wasting precious seats would be laid on them.

Following events from the sidelines are Netanyahu and Gantz. Gantz does not need a large party on the left to steal seats from him, and Netanyahu is praying that Barak runs alone and does not pass the vote threshold, along the way diminishing Blue and White.