Will Peretz's gamble pay off for Labor or bury it?

Labor Party chair Amir Peretz knows he needs to peel off voters from other parties and blocs, but does he have enough time? 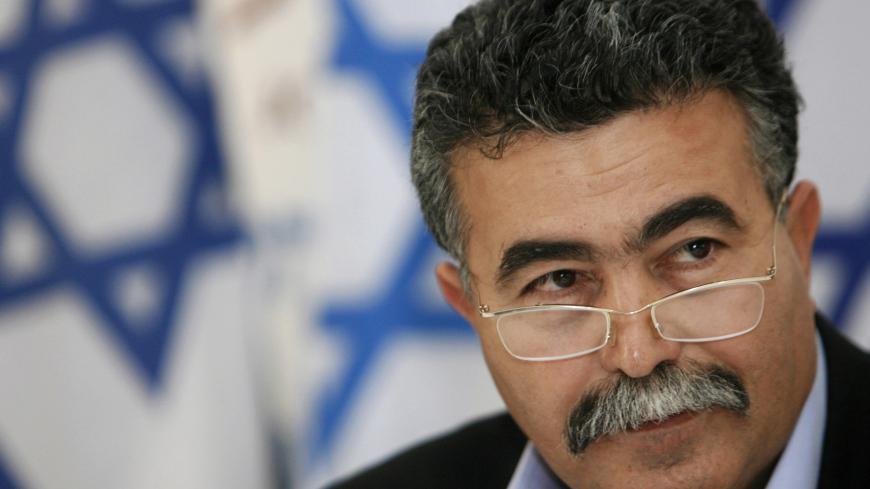 The formation of an alliance last month between the Labor Party, headed by Amir Peretz, and Gesher, led by Orly Levy-Abekasis, failed to produce an outburst of enthusiasm on the Israeli left. True, in May 2016, the left cheered on Levy-Abekasis when she left Yisrael Beitenu to form Gesher as a one-person faction in the Knesset — “Orly, come home to where you belong,” Labor Knesset member Itzik Shmuli had said — but this time, when the bride arrived for the wedding, few on the left showered her with love.

The change in attitude apparently stemmed from Labor-Gesher rejecting the idea of joining the Democratic Camp, the alliance of former Prime Minister Ehud Barak's Democratic Israel and Meretz. The ensuing cries of despair gave birth to allegations that Peretz had sold his soul to Satan (aka Prime Minister Benjamin Netanyahu) in exchange for senior positions in his right-wing government and perhaps even for the presidency. Meanwhile, Peretz promised to bring voters from the right to Labor and swore up and down that he would never enter a Netanyahu government. Still, the skeptics remained skeptical.

The previous head of the Labor Party, Avi Gabbay, had failed to make good on his promise to peel off voters from the right and to win over new audiences. Given this, one can understand the mistrust on the left toward Peretz. Indeed, there is some truth to what supporters of a mega-merger of all the left-wing parties say when they contend that there is no reason to slice up the center-left voter pie any more than it already is.

Ignoring for a moment the many conspiracy theories and (not unreasonable) claims that Labor-Gesher will not pass the voter threshold — in the process losing the center-left 140,000 votes — one must ask whether there is a certain logic to the Labor-Gesher merger. What motivated an old political fox like Peretz to dive head first into the unknown?

It was just two years ago that Peretz had lost the Labor Party chairmanship to Gabbay, a relative unknown. Peretz then threw his support, publicly at least, behind the new Labor chairman, who went on to win the party the fewest seats in its history in April, orchestrated a humiliating break with Tzipi Livni, his partner in the Zionist Camp, and then quit politics altogether after toying with joining Netanyahu’s coalition government.

Peretz has quit Labor twice, in 1999 and in 2012, each time to join another party. Each time he returned. As chairman once again, he sees what he believes to be a historic opportunity to rehabilitate the party as well as his own standing. He believes that joining forces with Levy-Abekasis offers a real chance to win the trust of new audiences and eventually gain their votes. From his perspective, the first thing he has to do is make the distinction between Labor-Gesher and the more left-leaning Democratic Camp, led by Meretz's Nitzan Horowitz. There is no other way for him to accomplish his mission.

Peretz is certainly right that the center-left desperately needs to reach new audiences, including Mizrahi Jews (of Middle Eastern descent), immigrants from the former Soviet Union and Ethiopian Jews. That is how it will increase its vote potential. He also wants to lead the party beyond the narrow confines of Tel Aviv and win in the north and south of the country. Peretz knows all the numbers and is fully aware that the further he moves from the center of the country in the direction of the periphery, the less likely he is to encounter supporters of the center-left parties. This is even true of Sderot, in the south, where Peretz grew up from, and Beit Shean, in the north, the hometown of Levy-Abekasis.

The big question is how to attract new blocs of voters to Labor. The party's leaders, including Peretz in his first term (2005), have spoken about this for years. In practice, however, they did almost nothing to attract the coveted new voters. They failed to create a buzz on the ground or to develop effective grassroots campaigns that would appeal to them. All their promises were cast into oblivion, while their highly regarded political consultants declared authoritatively, “Right-wing Russian-speakers will not come to the Labor Party,” “Israeli Arabs will always support their own candidates,” and countless other, similar comments. Then, in April, the Labor Party's own base jumped ship when it looked like the party had truly lost its way.

Even now, when it is obvious to everyone that the “Russian vote” will decide the outcome of the September election, the big fight for the support of voters from the former Soviet Union is being waged between the Likud and Yisrael Beitenu. By contrast, Blue and White, the Democratic Camp and Labor-Gesher are sitting out the fight. That Amir Peretz saved the (unrealistic) 25th spot on the party’s Knesset list for Vladimir Sverdlov, a party activist with 25 years of experience, and actually forgot his name in an interview, suggests that Peretz is putting all his chips on the Mizrahi vote.

In other words, he is targeting the same voters who showed trust in candidates viewed as social leaders and cast ballots in the last election for Gesher or for Moshe Kahlon’s Kulanu. Ostensibly, these voters have nowhere to turn except to Labor-Gesher. Kulanu has been swallowed by the Likud, and Levy threw her support behind Peretz, who also has a proven reputation as a leader on social issues.

According to Peretz’s logic, these voters should overcome their reservations about casting their ballot for Labor, especially now, when two Mizrahi social leaders — himself and Levy-Abekasis — head Labor-Gesher. A senior member of Labor who spoke with Al-Monitor on the condition of anonymity expressed concern that there is not enough time until September 17 for Peretz to carry his plan to fruition.

“I had no debate with Amir Peretz about the need to settle back in the hearts of those who left us,” the source said. “The question is whether this goal can be achieved in a matter of weeks or if it will take months or even years. The party needs to create an emotional bond of identification with those who left it or who never voted for it before.”

The same senior party member also expressed reservations about efforts by Gabbay “to curry favor” with voters and called his attempt “shallow.” He remarked, “The fact that he started walking around with a yarmulke in his pocket while emphasizing his Moroccan roots was insulting to voters. The smart thing to do is not to pretend to be something we’re not.”

Only on Sept. 18 will we know whether Peretz’s gamble paid off, or as the skeptics predict, ends up burying Labor. Even if Labor-Gesher wins 4-5 seats with older Labor Party loyalists, it will be a devastating blow for what was once a proud party in power.