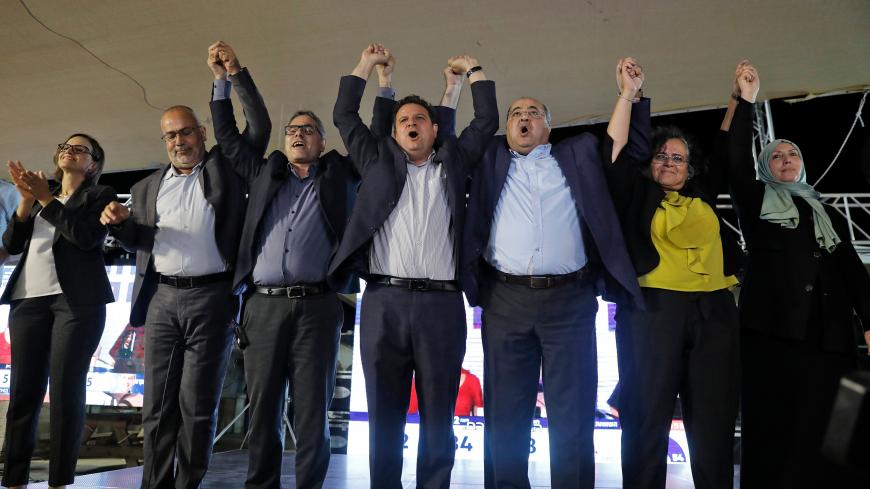 Hoping to scare Jewish voters and to corner Blue and White Chairman Benny Gantz, the Likud's election campaign recently linked Gantz's party to the Joint List, charging that the Arab party would lead Gantz by the nose in all matters pertaining to security. Gantz reacted immediately by taking aim at the Joint List, thus falling into Likud's trap.

A novice in politics, Gantz lacks real experience in sophisticated political machinations. As a result, he has just lost his chance to form a government as well as to improve his position in negotiations to form a unity government. If there ever had been any chance of Gantz forming a minority government with the outside support of the Joint List, it is now dead and buried thanks to the tone-deaf remarks he made Feb. 11 at a political event in the Arab village of Bi’ina.

While the inclusion of the Joint List in a government headed by Gantz would be an unreasonable scenario under any circumstance, that he dared utter such unequivocally in public makes it difficult for Joint List members to recommend him to the president to form the next government. In Gantz's futile effort to defend against Likud’s campaign, he failed to leave himself a feasible alternative. Some of the most recent polls indicate a slight rise in support for the Joint List, which is hoping to win 16 seats (three more than in the last elections, in September). This is not some imaginary scenario. It could make the center-left — Blue and White with Labor-Gesher-Meretz — a powerful, consolidated bloc bigger than the right wing. Gantz, however, terrified of the Likud campaign, has alienated the Joint List, preferring instead to rely on Avigdor Liberman, chair of Yisrael Beitenu. That will not be enough to get him the requisite 61 seats in any scenario.

Also in Bi’ina, Gantz tried to express reservations about the provision in President Donald Trump’s “deal of the century” for the “transfer” of some Israeli Arab citizens, but ultimately did not disavow it entirely. “No Israeli citizen, whether Jewish or Arab, will be forced to relocate to the territory of another state,” he said. In other words, he did not reject the transfer of sovereignty over the Arab settlements in the Triangle and Wadi Ara to a future Palestinian state, but holds that anyone living in the affected areas could relocate to another Arab settlement in Israel if they so desired.

The Joint List chair, Knesset member Ayman Odeh, refuses to accept this. Instead he has set a very high threshold, perhaps an unattainable threshold, for Gantz. “If we don’t hear Gantz make a very sharp statement in opposition to the idea of transfer and annexation, we will not recommend him under any circumstances,” Odeh said in a Feb. 11 interview with Army Radio. “What is he thinking? That we’re in his pocket? Of course, we aren’t.”

“It turns out that even candidates for prime minister can be less than intelligent,” the chair of Balad, Knesset member Mtanes Shehadeh, told Al-Monitor. “This wise man got dragged in by the racist popular sentiment. He does not try to challenge the society by offering fresh ideas, nor does he suggest any alternative. Jewish voters realize that there is no difference between him and the Likud in any of the issues on the agenda.”

After the September elections, the three Knesset members from Balad, including Shehadeh, refused to recommend to President Reuven Rivlin that he grant Gantz the mandate to form a new government. In contrast, the other 10 members of the Joint List did recommend Gantz. Shehadeh stood his ground, despite pressure from Odeh and Knesset member Ahmad Tibi.

“This time, Gantz did all the work for us,” said Shehadeh. “It will be hard for our other partners [in the Joint List] to recommend him.” Shehadeh went on to make clear that Balad would not agree to support a Gantz-Liberman government from outside the coalition. “After all, Gantz says that he wants to form a Zionist government.”

While Gantz tries to protect himself against the Likud, Prime Minister Benjamin Netanyahu has moved to help the extremist right-wing Otzma Yehudit pass the electoral threshold. In the last elections, Netanyahu thought that the party's chances of passing the threshold were so slim that he called on right-wing voters not to support it, to avoid wasting their votes. For the upcoming elections, he is trying something new. Yedioth Ahronoth reported on Feb. 13 that Netanyahu has been in contact with Otzma Yehudit's leader, Itamar Ben-Gvir, through an emissary, Natan Eshel. According to the newspaper, Netanyahu will try to help Ben-Gvir pass the electoral threshold, but if that fails and a fourth round of elections is required, Ben-Gvir will not run. Ben-Gvir has not denied this. In an interview with Kan Reshet Bet, he said, “I don’t want to respond to what has been told to me behind closed doors.… There is only one way forward for the right, and that is having Otzma Yehudit in the Knesset.”

It has also been reported that Netanyahu plans to approach the ultra-Orthodox Yahadut HaTorah to ask that the smaller Hasidic groups supporting it cast their votes for Otzma Yehudit to help it get past the electoral threshold and bring Netanyahu’s right-wing bloc closer to a 61-seat majority. Furthermore, he plans to approach the rabbinical leadership of the religious Zionist movement, with whom he has maintained contacts behind Yamina leader Naftali Bennett’s back, to get them to openly instruct their followers to vote for Otzma Yehudit. Of course, Netanyahu would not say this himself. He would rather leave the “dirty work” of recommending a fascist, racist party to the rabbis of the religious Zionist movement.

That is another element of the trap Netanyahu has set for Gantz. Netanyahu led Gantz to dismiss the Arab electorate off the cuff while simultaneously lending his support to a party that most Israelis once considered to be little more than a group of delusional right-wing extremists. The difference is that now, he is desperate for its votes.

Bennett renounced Ben-Gvir on Feb. 12, stating publicly, “I will not allow a man who shows such disdain for the country and who considers the IDF and police to be his enemies to enter the Knesset.” In January, he said of Ben-Gvir, “My party list will not include someone who has a photo of a man [Baruch Goldstein] who murdered 29 innocent people hanging in his living room.”

In contrast, Netanyahu has no problem helping these disciples of Rabbi Meir Kahane. Perhaps it is because in several of the past election campaigns he has convinced his Jewish electorate that Arabs are the enemy, while Jews who rejoiced over the assassination of Prime Minister Yitzhak Rabin are worthy coalition partners. It seems as if Gantz himself absorbed this general sentiment. In a single speech, he proved that he has little new to offer voters fed up with the way Netanyahu has been running the country.