By choosing to help Otzma Yehudit pass the voter threshold, Prime Minister Benjamin Netanyahu has paved the way for the party to enter the Knesset. 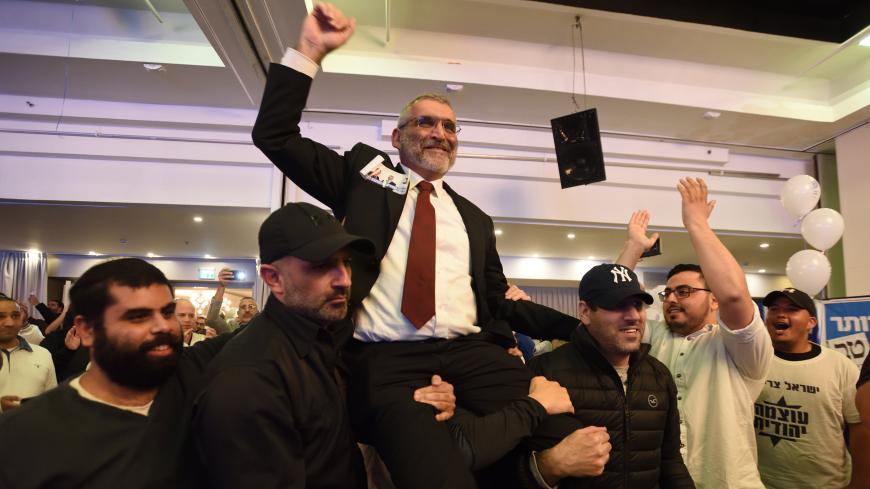 Just before last April’s election, Prime Minister Benjamin Netanyahu forced the radical-right Otzma Yehudit (Jewish Power) party into the wavering arms of Rabbi Rafi Peretz, then-chairman of the religious right United Right party. By doing this, Netanyahu granted legitimacy to the violent, often feral disciples of the late Rabbi Meir Kahane, making them an inseparable part of the right-wing bloc that he so wanted to strengthen.

The merger of Otzma Yehudit with the other right-wing parties came to an end in the current election campaign. The leaders of Otzma Yehudit realized that they are deemed undesirable by at least some leaders of the religious right, so they decided to take advantage of the publicity and legitimacy, which Netanyahu offered them in April, and attempt to pass the voter threshold on their own.

According to the most recent polls, Otzma Yehudit is closer than ever to being elected to the Knesset. This leaves Netanyahu with a dilemma. He wants to increase the strength of his own Likud party, but he also wants to ensure that the right-wing bloc wins 61 seats. Should he try to thwart Otzma Yehudit’s efforts to get past the voter threshold, or should he throw the party a lifeline? In one interview, he did in fact call on right-wing voters not to cast their ballots for Otzma Yehudit, claiming that they would just be throwing their votes into the garbage. Then, in a second interview, he admitted that even polls commissioned by the Likud show Otzma Yehudit passing the electoral threshold.

The way things look now, Netanyahu selected the second option. He chose to help the party of Kahane’s disciples, so that it gets into the Knesset. He knows that if Otzma Yehudit does pass the electoral threshold and wins (at least) four seats, he is more likely to be asked by the president to form the next government. Still, that would just be the beginning of his problems.

Otzma Yehudit Chairman Itamar Ben-Gvir makes no effort to hide his plans. In the last election, Netanyahu promised to appoint him to the committee that appoints judges. Now he is aiming much higher. He wants the whole Justice Ministry for himself. Ben-Gvir knows that he will have enormous power if Otzma Yehudit passes the electoral threshold. Netanyahu will have no way to form a coalition without it. That's why Ben-Gvir is expected to demand a fair price, at least as far as he is concerned. It is a price that will empower him to shoot an arrow straight into the heart of Israeli democracy and smash the Supreme Court to smithereens. As he puts it, “The Supreme Court will have a Zionist-Jewish agenda. Because of its heavy workload, we will add 15-20 new justices to it. … I am coming to instigate change.”

It is no secret that there is a photo of mass murderer Baruch Goldstein hanging in Ben-Gvir’s home. Goldstein, it will be recalled, massacred 29 Muslim worshippers in the Cave of the Patriarchs in Hebron in 1994. In 1995, a short time before Prime Minister Yitzhak Rabin was assassinated by a Jewish extremist, Ben-Gvir boasted that he had stolen the emblem from Rabin’s official car, threatening, “We got to his car, and we’ll get to him too.” This ominous promise is still etched in Israel’s collective memory. This is the person that Netanyahu legitimized.

Based on the testimony of three Blue and White party activists, who spoke with Al-Monitor, Likud activists have already started to cooperate with these extremist followers of Kahane. They are trying to help them win the missing votes that would pave the way for Otzma Yehudit to enter the Knesset and for Netanyahu to remain in the prime minister’s office.

According to these Blue and White activists, help from the Likud is provided in two distinct channels. The first involves messages to right-wing voters along the lines of, “Otzma must pass the voter threshold.” The second involves logistical aid to the party as it organized for election day. When it comes to the honed message, the indications are clear. Over the last week, the Likud has adopted the kinds of messages that speak to the heart of far-right voters, to convince anyone who is wavering.

“As soon as the polls showed that Otzma Yehudit is about to pass the voter threshold, there has been a network of coordination between Likud activists and Otzma Yehudit supporters,” a prominent ground organizer for the Blue and White party told Al-Monitor on condition of anonymity. According to him, the prevailing assessment in Blue and White election headquarters is that many traditional Likud voters will be casting their ballots for Otzma Yehudit in order to help it pass the voter threshold. This, they [Likud voters] think, will save Netanyahu.

In the last election, polls predicted that Moshe Feiglin’s Zehut party would be wildly successful. Then, when the moment of truth finally arrived, the party failed to pass the electoral threshold and remained outside the Knesset. This should not be taken to mean that the same thing will happen to Otzma Yehudit. There is a big difference between Feiglin and the party of Kahane’s disciples. Zehut resonated with voters because its most prominent message in the campaign centered around the legalization of marijuana. That was why the party soared in the polls. Feiglin played down his positions on the Temple Mount and his extreme views regarding Arabs. Once these became known, voters were faced with the paradox of supporting an extreme right-wing party and the legalization of cannabis. Former supporters of Ale Yarok (“Green Leaf’’ party), which supported legalization in previous elections, came to their senses and kept Feiglin out of the Knesset.

Supporters of Otzma Yehudit are a very different story. They know exactly who and what they are voting for. The real issue is that the people carrying on the racist and nationalistic legacy of Kahane have long been pariahs, well outside the mainstream. No one ever gave them any chance whatsoever to rise to the center of the political stage, and certainly not to hold the balance of power for the entire country. The very thought that Ben-Gvir, as the party’s chairman, could end up a minister in the next Israeli government should keep Israelis awake at night — and that includes those Likud voters who chant, “Netanyahu, King of Israel!” and believe that there is no one else like him. After all, if Netanyahu is, in fact, tasked with forming the next government, he will have to pay a steep price to a party that he personally pulled out of the gutter, and which now threatens to cast a mark of shame on the State of Israel.