Strategy of the radical right to pass Knesset-entry threshold

The reunion of the radical right Otzma Yehudit party with HaBayit HaYehudi could open Knesset doors to nationalist Itamar Ben-Gvir. 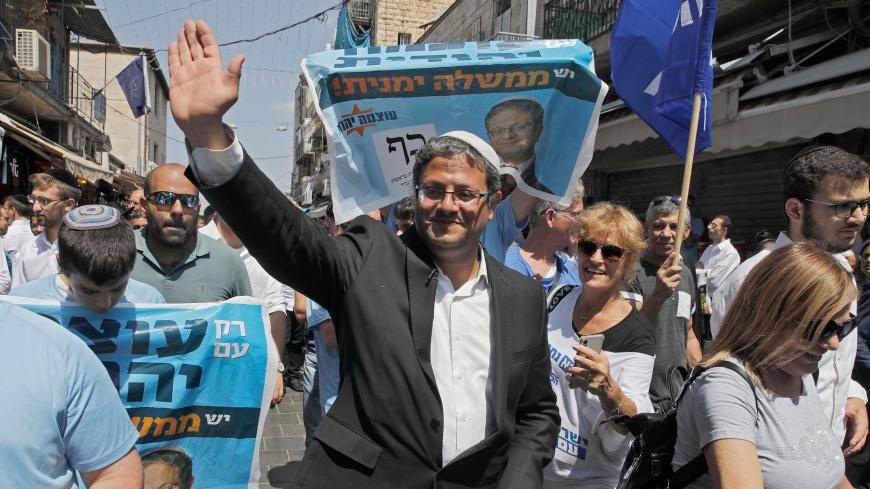 On Dec. 20, Itamar Ben-Gvir’s phone rang. On the line was a close associate of Prime Minister Benjamin Netanyahu who congratulated the chairman of Otzma Yehudit (Jewish Power) on his agreement with HaBayit HaYehudi Chair Rafi Peretz. The agreement, signed that morning, determined that the two parties would run on a joint list in the next election and that Ben-Gvir would be ranked third on the list. Other representatives of Otzma Yehudit would be placed in the sixth and ninth places. According to the agreement, Ben-Gvir and Peretz are also keeping spots on their list for representatives of the National Union party headed by Bezalel Smotrich — for whom the second spot is being held — even though he has not agreed at this stage to join the united list. Peretz and Ben-Gvir also agreed, verbally, that representatives of Otzma Yehudit would receive chairmanships of Knesset committees if their parties would be part of the coalition.

The phone call between the Netanyahu associate and Ben-Gvir attests to the keen interest the prime minister has in alliances on the religious right. A senior Likud source who spoke on condition of anonymity told Al-Monitor that Netanyahu fears a repeat of “the accident” that happened to the right in the April 2019 election when Naftali Bennett and Ayelet Shaked’s New Right did not pass the vote threshold, falling 1,400 votes short. Moshe Feiglin’s Zehut party also lost the right two mandates, and these were six mandates total that could have brought the formation of a right-wing government headed by Netanyahu.

According to the same source, the Likud has polls that show that two lists on the religious right — the New Right and a joint list of HaBayit HaYehudi, National Union and Otzma Yehudit — could together win 10 mandates. Along with the two ultra-Orthodox parties — Shas and Yahadut HaTorah — and the Likud there is a chance again for a right-wing government with at least 61 seats, without Yisrael Beitenu’s Avigdor Liberman. This is Netanyahu’s motivation to unite Otzma Yehudit, which ran alone in the September 2019 election and did not pass the vote threshold — it received 83,000 votes that represent two mandates — with HaBayit HaYehudi and the National Union.

As mentioned, Smotrich right now refuses to join the list and demands a primary election among the religious Zionist public in order to determine the makeup of such a list. The estimate is that close to the date lists must be submitted to the Central Elections Committee, in mid-January, Smotrich would join the alliance. Netanyahu is “working on it” and acting to improve Smotrich’s rank on the list.

Netanyahu’s involvement in the affairs of the parties to the right of the Likud started with April’s election. Then he pressed for an alliance between them and received much criticism, from the left and the right, for “whitewashing” Otzma Yehudit — a racist party whose leaders are acolytes of Rabbi Meir Kahane, who as a Knesset member from the Kach party submitted in 1985 a bill to remove the citizenship of non-Jews. In 1988, Kach was disqualified from running in the election and in 1994 the government declared it a terror organization.

Otzma Yehudit, which until 2015 operated under the name National Jewish Front, has struggled for many years to pass the vote threshold. In April’s election it joined the union of right-wing parties, which won only five mandates. Before the election, the candidacy of its chairman, Michael Ben Ari, was disqualified because of his incitement to racism. His replacement, Ben-Gvir, who was ranked seventh on the list of the union of right-wing parties, did not win a seat in the Knesset. In September’s election Otzma Yehudit ran alone, after the candidacies of two more of its leaders — Baruch Marzel and Bentzi Gopstein — were also disqualified, and it ended up not passing the vote threshold.

Not disqualified, despite the demands of the left, was Ben-Gvir, who began his activism in the movement as a youth from a secular family, who wasn’t born at a settlement or one of the strongholds of the extremist religious right. In the first years of his political activism he was arrested many times by the police and even documented implicitly threatening Prime Minister Yitzhak Rabin. Later he studied law, "thanks" to Chief Justice Aharon Barak, as Ben-Gvir said in an interview in 2012, “When I asked for the disqualification of a judge in one of the indictments against me, the matter was transferred to Chief Justice Aharon Barak, and it was he who told me: 'Mr. Ben-Gvir, why don’t you study law?' I understood that continuing the former approach leaves us outside the camp … when you’re in the court talking with judges, lawyers and others, you develop friendships with people from 'the other side' and this impacts [them].”

Ben-Gvir has long understood that in order to make an impact you must reach the place where decisions are being made, such as the Knesset, and so he strives to get there. Because of his family background he is seen as less threatening than his fellow leaders of Otzma Yehudit, despite his extremist views. In the same interview he explained, “I’m not from an ultra-Orthodox neighborhood or a settlement stronghold like Kiryat Arba. I’m from a secular home in Mevaseret Zion, a mainstream Israeli town; I get Israeliness. They wrote about me that I’m dangerous because I speak Israeli. Israeliness is impressed in me. Maybe because of this when people look into it, they discover that secular Israelis fear Bezalel Smotrich more than me.” Ben-Gvir once said in another interview that if he found out his son was a homosexual, he would hug him and accept him. This is a moderate stance compared to that of Smotrich’s circles.

Ben-Gvir put a woman in the second spot on the Otzma Yehudit list for the 22nd Knesset following the September election — Adva Biton, the mother of Adele, the girl who was murdered in a terrorist attack in the West Bank, and also included a secular candidate on the list.

All this and the many interviews he has given in recent months — without doubt he is one of the most interviewed politicians in Israel — have helped Otzma Yehudit gain the perception of a legitimate party despite its racist extremist views. The party's platform calls for, among other things, Jewish settlement in all parts of the West Bank, imposing Israeli sovereignty over all West Bank territories, instilling Jewish law and “removing Israel’s enemies from our land.” Allegedly, the platform has become more moderate since Kahane’s day — at least on paper — but it seems that it was merely polished legally in order to prevent the party from being disqualified.

Would this be enough? Assuming that Smotrich would be convinced to join the list with Peretz and Ben-Gvir, it is likely that this list would pass the vote threshold and Ben-Gvir would become the first Kahane follower in years to be a Knesset member — perhaps even a minister.